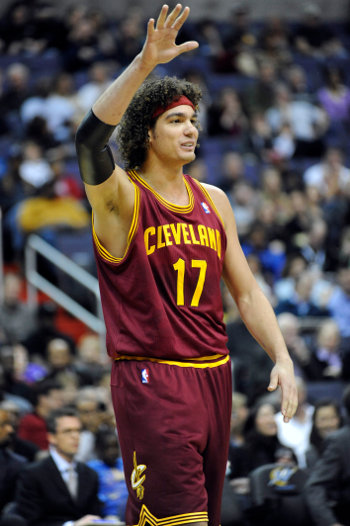 With everything that happened over the summer, did you think that you guys would still be as competitive as you are this season?

Anderson Varejao: Well, we lost some games we should have won. We lost foolishly against Sacramento at home, and against Atlanta as well. For us, every game is going to be different this year – we have so many new players, new coaching staff… It is a new system and we will just have to keep working hard and get better every day to win more games.

Usually with young teams like the Cavs are right now, it can be very hard to close games with a win. Do you think that perhaps the successes you had in the past somewhat rub off to the new teammates as well?

AV: No, it is never easy to win games. Third quarters are a big problem for us right now. We end up having to do so many adjustments in the fourth quarter to try and eek out a win. Luckily, we have some great shooters on this ball club like Mo Williams, who made some big shots for us and won us several games down the stretch.

Where do you see the Cavs this season?

AV: It’s hard to say right now. It’s too soon – hopefully, we make the playoffs and go from there.

How did you find out that LeBron was going to play for Miami this season?

AV: On ESPN. I was surprised, I thought he was coming back to Cleveland.

Why did you think he was coming back to Cleveland?

Have you talked to him at all over the summer, before or after the decision was made?

AV: No, I was with the Brazilian National Team throughout the summer, so we didn’t really talk neither here in the U.S., nor during the World Championships in Turkey.

Are you still happy in Cleveland?

AV: Who, me? Hell, yeah! It is a very different team than when I first joined, but this organization signed me for my first NBA contract, and I am very happy here. I’m just playing basketball and having fun.

Where does it go from here for you? You were playing for the title contender, and, overnight, you are now in a rebuilding situation. What do you see as your own career goal here in Cleveland?

AV: Well, I have four more years of my contract with the Cavaliers. I just have to get better every day, and get my new teammates better. We need to work together to try and get to the next level.

You played in the best European club (FC Barcelona), and you played with the Cavs when they were one of the best NBA teams as well. Do you see yourself finishing your career here in the NBA, or, perhaps, somewhere in Europe?

AV: I wouldn’t mind retiring here in Cleveland. As I said, I am very happy here. I still have so much more to improve in my game and to grow with my teammates.

What did Coach Scott bring to your team?

AV: Coach gives everyone a green light. He lets all of us play, and he tells us every day that if we play hard and learn the system, and play hard for one, three, 12 or 48 minutes, and learn his system, we will play for him. He’s doing a very good job with our young team here in Cleveland.

You mentioned the third-quarter woes. In a recent game against the Wizards, there was a 30-point turnaround you guys made in the fourth quarter in order to win the game, after an appalling performance in the third quarter. What do you think is the problem there?

AV: If I knew, I’d be sure to tell that to my teammates first (laughs). We are constantly watching films after every game, seeing what we did wrong and trying to get better.

What about the adjustments you make in fourth quarters in order to win some of these games where you played from behind?

AV: I remember in that particular game in DC, we just stopped moving the ball in the third quarter. We resumed doing that in the last part of the game and that’s how we won the game.

You sacrificed your body quite a bit playing for your National Team over the summer at the World Championships. You were even injured for a few weeks in the exhibition game leading to the tournament. Are you disappointed about how things ended up for Brazil, being eliminated in the Round of 16 by Argentina?

AV: No, but I sacrificed myself a little bit. I was hurt, and I played hurt in Turkey. But Brazil is my country and I love playing for my country. We didn’t finish the way we wanted to. We had some additional personnel issues as well. But the most important thing was that we went there and we fought for our country.

Did the Cavs management make any problems to you with regards to your participation in the National Team?

AV: No, they were very cool about it. They understand what it means to represent your country on such a big stage.

A lot of NBA players who competed at the Worlds over the summer are mentioning how they feel the fatigue caused by rigorous practice and game schedules during the summer. What about you?

AV: I feel that impacts my game right now. When the preseason and season started, I didn’t start fresh. But I will cope with the consequences, and I know I will be fine and that my body will adjust to the NBA schedule fairly quickly. I knew that before I went to play for the National Team, and I am still young, so it’s going to be just fine.