Durant's obstacles bringing out the best in others?

Durant's obstacles bringing out the best in others? 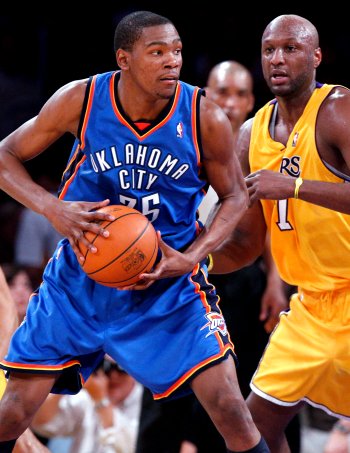 The Oklahoma City Thunder has solidly stood by their media campaign, ‘Rise Together,’ which wholeheartedly intertwines the team’s meteoric rise with the community that has adopted them since their move from Seattle in 2008.

It’s as much a testament to the appreciation and continuance of the generous support they receive from the Oklahoma City fans – who embraced the team, despite a 23-59 showing in their inaugural season and cheered them to a 50-32 Cinderella story last year – as it is a thematic element in the locker room that propelled the team and opened eyes.

The Thunder have embodied ‘Rise Together.’ They have provided a model of citizenry – as many are visible and involved in what is otherwise deemed a small market city. Practically all are models of personability – as nearly half the team is interactive with fans via social media, and dine and shop openly with locals.

But the trait the Thunder have demonstrated more than any other in their tenure in OKC is that of teamwork. Few other teams in the NBA last season embodied Andrew Carnegie‘s definition of teamwork being able to work together toward a common vision.

In this case, ‘Rise Together.’

They opened eyes. They made people nervous. They certainly changed opponents’ pre-game plans all season long. Moreover, they set the bar higher for themselves.

But the start to the 2010-11 season has been muddled by injuries, confusion, and sub-standard performances in which, at times, certain players seem disinterested at best.

The team as a whole seems to have lost a bit of its competitive edge, its swagger.

Don’t count Russell Westbrook among that generalization, however. Westbrook has emerged as a team leader, despite the fact that the majority of the Thunder faithful still adorn themselves with No. 35 jerseys and the face of the team is still Kevin Durant.

Westbrook is leading the Thunder this season in field goals attempted (172 through 22 games), field goals made (394 for 43.7 percent), free throws attempted (196), free throws made (171), and is tied with Durant as OKC’s second leading rebounder (both are at 122), only behind another of the team’s upstart players – Serge Ibaka.

Even James Harden has seen enough court time to improve his game and become a viable three-point threat, hitting 40.3 percent from beyond the arc, the team’s new three-point leader. Durant has struggled from his typical downtown sweet spots, hitting barely a quarter of his nearly 100 attempts.

What does this mean for Durant, the unequivocal face of the franchise, the humble kid from DC who thinks enough of every one of his teammates to include Thabo Sefolosha and Nenad Krstic on the cover of Sports Illustrated – not Westbrook or Jeff Green?

Does Westbrook’s emergence doom the chemistry of this team? The notion of ‘Rise Together?’ Because at first glance, it looks at times like Westbrook is leaving the other players in his wake, especially if you consider that the point guard wasn’t one of the people benched in Chicago on Monday night.

Of course, Westbrook’s runaway only looks that way on the stat sheet and in armchair conjecture. The kid is the ultimate team player.

Initial perception and commentary around OKC was that Westbrook was playing out of position a year ago. A shoot-first, pass-maybe point guard who had an Iversonian court mentality and someone who was possibly taking shots away from Durant over the duration of the season.

It’s the kind of evolution that afforded him the opportunity to take the last shot that could have pushed the Los Angeles Lakers to a potential Game 7. An emergence that has led to a spot on the NBA All-Star Ballot for a potential shot at playing in front of hometown friends and family next February.

A developing reputation that earned the youngster an invite to the USA Basketball tryouts last summer, where a spot many expected Green to have was filled instead by Westbrook and his uptempo flavor. We all know how that ended.

Westbrook, Durant and the rest of Team USA brought home the gold. But more importantly, the pride of global basketball back to its home country. It made Durant a force to be reckoned with, worldwide. It made Russell Westbrook a household name in circles outside OKC and UCLA.

But the summer games may also have been a contributing factor to Durant’s stamina and subsequent maladies every bit as much as it has been a boost to Westbrook’s confidence and overall rise.

This isn’t a firmly tenured group of grizzled veterans hoping for a last gasp shot at another ring before legends retire. This isn’t a three-ring circus of players full of themselves that have spurned their hometown teams in favor of media hype and $4.1 million beachfront mansions.

This is a team that gets it.

Teamwork is working together – even when apart. A ‘less me, more we’ mentality, even when its ‘star’ players are benched.

“I want to be the best teammate I can be,” Durant recently told local media. “I think I can learn a lot… I could be a better teammate. And that’s what I tried to do – spark my guys from the bench. It’s a good lesson for us.”

The rise continues, even though it may seem there are intermittent holds or interruptions in that rise.

The disciplinary benching by head coach Scott Brooks, the injuries to Durant and Green, and the Team USA exposure all have afforded opportunities for Westbrook to improve his game – from 41.8 percent a year ago to 43.7 from the field.

He’s nearly doubled his trips to the charity stripe. He’s getting to the glass more, and cleaning while he’s there, No. 4 in the league among guards who include names like Dwyane Wade and Kobe Bryant. And, yes, his No. 0 jersey is in mainstream stores hanging right alongside Durant’s.

His head is in the game, but no bigger. He’s just another kid from Lawndale, California trying to, continuing to, and succeeding at making his mark.

No one’s shadow stands shorter or taller on this team. It’s a collective team shadow set to tower over many of the league’s other teams for many years to come, and the guy they call Brook figures to be a solid part of that.

Coming together was a process. Keeping together is progress. And the Thunder have proven that working together is almost always a success. There are those that would argue that conflict is inevitable when egos are involved. But the coaching staff and the players have a unified mindset that helps them complement one another’s strengths and weaknesses… and, most importantly, there aren’t any egos.

Merely one team identity, one that embraces the simplicity and humility of the fans that support it.

Russell Westbrook’s emergence hasn’t detracted from that mission. It hasn’t taken anything away from Durant, statistically or from a team leader standpoint… It has simply made the Oklahoma City Thunder that much more dangerous.

And that’s the way fans like it in the Sooner State.