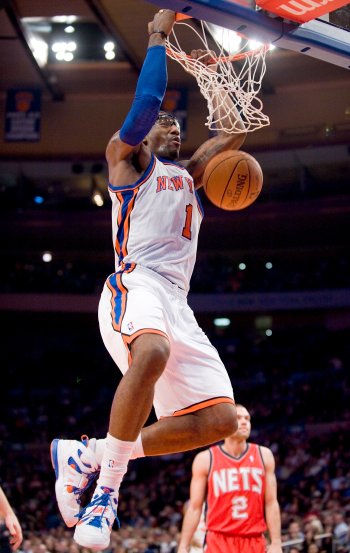 We don’t know how this is going to end, but, for now, can we agree that the New York Knicks are the most surprising story of the still-young 2010-11 season?

Consider where we find them two weeks before Christmas as they prepare for a week which might well tell us even more about them with home games against Denver, Boston and Miami.

They are 15-9. That’s only a game worse than vaunted Miami (which appears to have gotten its act together) and just four games astern of conference leader Boston. They are 10-4 on the road, the most road wins in the NBA. That includes eight straight victories away from the World’s Most Famous Arena, where they are an underwhelming 5-5. The last Knicks road loss was in Denver on Nov. 16.

They have won 12 of their last 13 games. The only blip in that stretch was a home loss to Atlanta on Nov. 27. They haven’t lost since then, reeling off seven straight wins.

Can you imagine what will happen if they sweep this week? Or win two of three? So far, of the 24 games they’ve played, only six have been against teams with winning records. They’ve played 11 games against Minnesota, Toronto, Washington, Golden State and Charlotte.

Denver, Boston and Miami constitute legitimate challenges, especially the Celtics and Heat. (Denver will be on the last game of a four-game Eastern swing, always a tough game.)

“Any time you’re doing better than what people think, that’s there until you beat somebody,” Coach Mike D’Antoni said. He added: “We’re playing well. I’m happy about it. And when we have good games coming in, we’ll all find out together where we are.”

Did anyone outside the Knicks organization envision this? Especially after a 3-8 start, which included a six-game losing streak, including defeats to five bad teams? If they did, could they please line up to take a lie detector test?

Sure, everyone expected them to be better; unlike the last two years, they actually are trying to win games this season and have players on their roster they actually intend to keep for a while. And some, like yours truly, had them among the eight playoff teams in the Eastern Conference, although I felt they might need Carmelo Anthony to make it happen.

But did anyone see Amare Stoudemire picking up in New York where he left off in Phoenix, without Steve Nash? True, he had former coach D’Antoni’s system and he is fitting in seamlessly, leading the team in scoring. The Knicks, meanwhile, are second in the league in scoring, firing threes without impunity.

Stoudemire has been a flat-out beast. He is making a serious case for MVP, first-team All-NBA and maybe even a call from the movers and shakers on Madison Avenue. He is the top fourth-quarter scorer in the league, a revealing stat when there are guys like Kobe Bryant and LeBron James in the league.

He has scored 30 or more points in the last seven games, which no one wearing a Knicks uniform has done since 1962 (Willie Naulls.) He’ll have the record all to himself if he can hit the big 3-0 against the Nuggets on Sunday.

“He can do whatever he wants to do,’’ D’Antoni said of Stoudemire. “The guy is making great decisions, shooting the ball so well. He’s doing the right thing, there’s no doubt about it. Yeah, I don’t want to mess it up.”

There are two other head scratchers in the surprise category: Raymond Felton and rookie Landry Fields. Felton has been a revelation. Whatever Chris Duhon could not or would not do, Felton is doing it – and then some.

Fields, a second round draft pick from Stanford, is that rare rookie who (a) spent four years in college and (b) actually knows how to play basketball, as opposed to being a human pogo stick. Of the 38 players selected before Fields, only John Wall and DeMarcus Cousins started Opening Night. Fields leads all NBA guards in rebounding and only putative Rookie of the Year Blake Griffin has more double doubles. Fields won the Eastern Conference Rookie of the Month award in November, the first Knick to be so honored since Channing Frye in 2005.

Get ready for a lot of ‘the last time this happened’ with this year’s Knicks. They’ve brought the fun and the buzz back to Madison Square Garden and that is never a bad thing. They stuck to a plan, endured withering criticism and compounding losses. But they emerged a far, far better team, one that, to date, is far, far better than a lot of us thought.

Let’s see where it goes from here, but it’s hard not to enjoy the ride just a little bit. It’s been so long.