Splitting the pie that is BRI

Splitting the pie that is BRI 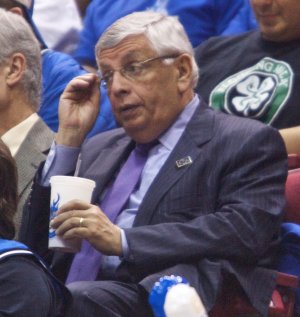 Among the most critical of issues in collective bargaining discussions between the NBA’s owners, led by commissioner David Stern, and the NBA Players’ Association (NBPA), led by executive director Billy Hunter, is the issue of dividing the NBA’s revenues, known in league circles as basketball-related income (or BRI). Presently, NBA players are guaranteed to receive 57 percent of BRI while the owners receive 43 percent. This negotiation point is a zero-sum game in which every extra percent garnered by the NBPA will be a percent conceded by the NBA owners and vice versa.

In searching for a fair BRI split, the NBPA will argue in favor or the status quo pointing to the revenue sharing structure of the NFL, which affords players 59.5 percent of league revenues; however, this structure is one that has the NFL careening toward a lockout in March of 2011, shortly before July 1, 2011, when the NBA’s lockout could ensue. The current revenue split between the NHL’s owners and players, arrived at after a lockout of the entire 2004-05 season, affords players 57% of league revenues.

On the NBA’s side, Stern has made it clear that the NBA is not a profitable venture as presently constituted; he has demanded a swing of $750-800 million in revenues in favor of NBA owners under the new CBA. Expecting to lose $340-350 million during the 2010-11 NBA season, deputy commissioner Adam Silver acknowledges the problem as endemic to the system, stating that “Even though we reported we have record season-ticket sales over the summer and otherwise very robust revenue generation, because of the built-in cost of the system, it’s virtually impossible for us to move the needle in terms of our losses.”

In other words, solid revenue streams fail to translate into profits for NBA owners (collectively), considering the overhead cost of labor.

The parties to the collective bargaining discussions are going to have to get creative and determined in the months ahead if the NBA is to circumvent a lockout. In October, Hunter rejected Stern’s position as a non-starter, instead rallying his players to “prepare accordingly.” In November, Hunter was “99 percent sure” that a lockout would ensue.

CBS Sports’ Ken Berger has recently reported that the NBPA offered to scale back the guaranteed take that its players receive while permitting willing owners to spend in excess of the new, lower guarantee. Even assuming the continued existence of a salary floor, this NBPA proposal would allow franchises with lesser means to keep even lower payrolls while also allowing willing teams to further expand their ability to achieve bloated payrolls (e.g. two mid-level exceptions). Meanwhile, effectively throwing out salary matches in trades and adding a second mid-level exception would lead to a veritable arms race among franchises willing to spend.

Will the Magic and Lakers become the Red Sox and Yankees of basketball, or would Mr. Prokhorov’s Brooklyn-based operation blow everyone out of the water?

The biggest drawback to this proposal would be the widening of the talent gap between the NBA’s haves and “have lesses”, a death knell for parity in the NBA. Absent drastic, game-changing revenue sharing, small market teams without very deep-pocketed owners would have little chance of both profitability and on-court success. A better system, which will be portrayed as the blog series rolls on, would allow all NBA franchises to field competitive teams and simultaneously profit. Salary floors, enhanced revenue sharing, a more taxing luxury tax, cutting back soft cap loopholes, and concessions from both the NBA and NBPA would all be required to accomplish make such a system possible.

But back to BRI… Larry Coon, unofficial CBA “professor,” indicates on his NBA FAQ website that the NBA’s BRI in 2009-10 was $3.643 billion. At this level of BRI, a 57/43 split resulted in players receiving $2.076 billion in salaries while owners received $1.567 billion in revenues. Stern, having initially indicated that a $750 million swing was necessary, will ultimately accept a swing that is substantially less in light of the fact that NBA teams collectively lost less than half of that figure (using the NBA’s figures) in a down economy.

With BRI at 2009-10 levels ($3.643 billion), players under Stern’s proposal would receive $1.326 billion and owners would receive $2.317 billion. Thus, the Stern-proposed split would be 36/64 in favor of the NBA’s owners. Coincidentally, this reduction would also represent a 36 percent paycut for NBA players.

This is the last CBA that Billy Hunter is likely to negotiate, and he will be loathe to see the NBA’s players become the first in a major North American, salary-capped sport to receive less than 50 percent of league revenues (much less 36%).

One of the reasons that the last CBA succeeded for players but failed for some NBA owners is that players receive a percentage of revenues, irrespective of the actual profit numbers generated by NBA teams. So, if NBA teams sell more tickets than ever but at lower margins than ever, NBA players can receive record salaries despite owners experiencing anything but record profits. The proposal that follows is grounded upon the premise that NBA owners, as business owners who risk their own wealth to create wealth, should experience considerable upside on increases in new revenues.

Conversely, players, who invest hard work and labor for the benefit of the business, should be entitled to certain guaranteed salary, isolated from the vagaries of market conditions. Because neither NBA players nor NBA owners will be successful without the other, a certain degree of partnership should be provided for, especially since NBA players are not fungible factory employees, but rather world-class athletes with remarkably rare skill sets.

The proposal detailed below would make the players and the owners 50/50 partners in the event that BRI stayed constant. The BRI split would change incrementally, depending on how much BRI was realized by NBA activities. The following chart serves to illustrate:

This chart’s figures are for purposes of illustrating a multi-tiered system and not an argument that the percentages listed should be implemented.

As shown in the chart above, the first $1.2 billion in revenues is split 57/43, for the benefit of the players. The next $1.2 billion is split 50/50. The next $1.2 billion is split 43/57, in favor of the owners. At the point in which $3.6 billion of BRI is received, each side receives $1.8 billion. This $1.8 billion represents a $233 million swing in favor of owners. In the event that the NBA improves its revenues beyond the roughly $3.6 billion it made in 2009-10 (and it should be noted that BRI increased every year under the last CBA), then the owners will receive nearly two-thirds of these increased revenues.

For example, if revenues increased to $4.0 billion, ownership would receive $2.056 billion and players would receive $1.944 billion. Compared to the $1.567 billion that NBA owners received in 2009-10, this increase would amount to $489 million, an amount likely to ensure profitability across all NBA franchises, especially if revenue sharing between teams is bolstered.

As league revenues continue to climb north of $4.0 billion, additional upside could be realized by both owners and players. With the yet unsated appetite for NBA basketball internationally (the NBA just signed an undisclosed deal to bring NBA basketball to TVs in India), combined with a massive base of mobile phone users and an impending rollout of NBA mobile services internationally, sizeable increases in NBA revenues are conceivable.

This proposal on the subject of BRI is one which could possibly make for a compromise, as both parties would feel as though they’ve given up something and made the other party give up something as well. In reaching an agreement, the NBA could prevent years of fan resentment (or “badwill”), owners could be on the path to profitability, and players could continue to earn healthy salaries. As the NBA’s owners have tremendous upside in this deal, the players would have incentive to make this a shorter-term deal. If the NBA grows steadily as it has in the past five years, this deal could work well for both parties. However, if the NBA experiences a revenue explosion (possible though unlikely) the deal would be far more beneficial for the owners than for the players.

Please stay tuned as we examine other critical issues to the NBA’s collective bargaining. We’ll turn our attention to the NBA’s soft cap in our next blog.