Mario Chalmers: "LeBron and Wade are gelling together right now"

Mario Chalmers: "LeBron and Wade are gelling together right now" 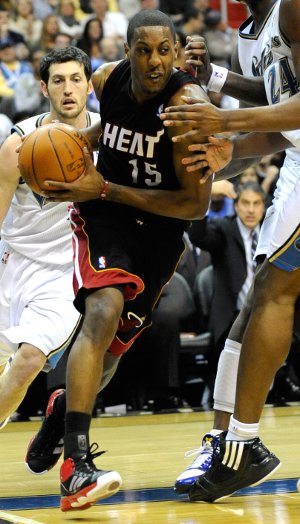 This is your third year with the team… How much has changed your role since you came into the league?

Mario Chalmers: It really hasn’t changed too much. I think it’s still the same – running the show, running the team, keep everybody involved, just being that defense player on the defensive end.

It seems you have had your ups and downs with coach Spoelstra. What is the best thing you have learned from him?

MC: Just about the NBA game. I mean, he knows a lot about the NBA and the league itself so he can see quality points and things that help us to face the best.

You started for the first time against Cleveland this season. How much do you expect to contribute to the team as the season goes by?

MC: Yeah, as much as I can. I’ll just try to do whatever it takes to help this team to win and keep doing it.

What has been the key for such an impressive winning streak lately?

MC: Our defense. That’s the main thing. We’ve been playing great defense, getting in transition and playing together as a team.

You will become a free agent at the end of the season. Are you following all the discussions about a possible lockout next year?

MC: Yes, definitely. Just wait and see what’s gonna happen. Whatever happens, after that then it’s time for me to start my process.

How seriously will you consider going to play to Europe if there’s finally a lockout?

MC: It’s not something that I’ve thought about it yet, but…

But you may consider it?

MC: No, nothing close at this point.

If there is no lockout, will you try to re-sign with the Heat?

Would you take less money to play more minutes on another NBA team?

MC: Right now, I’m not ready about any of that. Let’s see how the season ends and whatever happens after that then we’ll see my options.

MC: They are just gelling together right now, playing together, feeding off each other… They are two great players.

How good is your relantionship with Carlos Arroyo?

MC: That’s my dude. Me and Carlos have a good relationship. We are the point guards of this team, we feed off each other… That’s how we keep doing things.

Juan Colino contributed to this interview