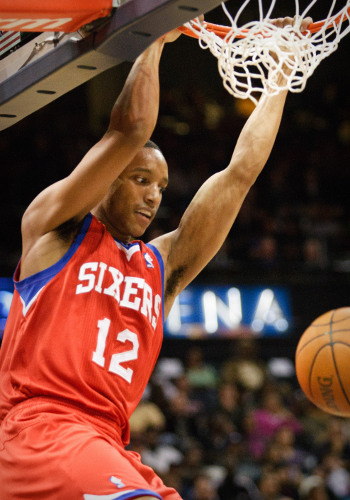 The game was over, his team had lost, and Evan Turner, the Philadelphia 76ers’ rookie swingman, was dressing quietly in the locker room. A reporter asked him for his thoughts on the game. Turner said he liked the way the Sixers had played the defending conference champion Boston Celtics right down to the wire before eventually succumbing, 84-80.

He had had a very good vantage point, for Turner had watched the entire 48 minutes from the Philadelphia bench. As the Sixers’ coach, Doug Collins, explained afterwards, “we went with the guys we thought gave us the best chance to win.”

Lately, Turner does not fall into that group.

The player everyone loved coming out of Ohio State, the No. 2 overall pick in the 2010 draft, the player who drew comparisons to Dwyane Wade and Oscar Robertson, can’t seem to find his way into the rotation of a club that is laboring well below .500 in the top-heavy Eastern Conference.

The Celtics game was his second DNP in five days; he also had not played when the Sixers hosted the defending champion Los Angeles Lakers. Those are the only two games in which he has not played this season. Among rookies, Turner ranks 11th in scoring at 6.3 points a game (only four are averaging more than 10 a game) and 37th in field goal percentage at a disappointing 39.2 percent.

And therein lies the rub. On a team with more than its share of wing players, Turner’s inability to put the ball in the basket has him playing behind Jrue Holiday, Jodie Meeks, Lou Williams, Andres Nocioni and Andre Iguodala.

“He hasn’t made enough shots for us for him to play,’’ Sixers president Rod Thorn said matter-of-factly.

Turner certainly isn’t the first high lottery pick to struggle in the NBA. (Adam Morrison jumps to mind recently.) But he had so much going for him, including three years of college ball, that a seamless, easy fit in Philadelphia seemed like a lock.

He was coming off a banner year in which he had become the first Division I player in half a century (Robertson, 1960) to average at least 20 points, 9 rebounds and 6 assists in a single season. He had done so despite fracturing two vertebrae in his neck, forcing him to miss six games. When he returned, well ahead of schedule, he dropped 32 on Purdue. He was resourceful, versatile, tenacious, a can’t-miss prospect.

Collins, coaching his first season in Philadelphia, downplayed Turner’s terrible performance in the Orlando summer league to a lack of workouts around draft time due to fear of injury.

“He knew he was going high so he didn’t do all the workouts that a lot of other guys did. He wasn’t in shape,” Collins said.

But he was in the rotation on opening night, scoring a team-high 16 points off the bench to go along with 7 rebounds and 4 assists. And when Iguodala went down with a strained Achilles’ tendon last month, missing five games, Turner started and averaged 12.8 points, 8.2 rebounds and 2.8 assists in 37 minutes a game. He shot a respectable 45 percent from the field.

That turned out to be an aberration. Iguodala returned to the starting lineup. Turner returned to the bench, literally and figuratively. There was the DNP against the Lakers, a nine-minute cameo against Orlando and the DNP against the Celtics. In his first game in his hometown of Chicago, he logged 30 minutes of mop-up time as the Sixers were in the process of losing by 45 points. He missed 9 of the 11 shots he took in that game and is shooting 29.4 percent in his last 14 games.

“He’s really struggled shooting the basketball and if he’s going to be out there, he’s got to be making shots for us,’’ Collins said.

“Every day is a learning experience for me,’’ Turner said. “I don’t know what to say. That’s life. You have to bounce back and keep working.”

Asked if that is what the Philly veterans have advised, he said, “that’s just common sense.”

Thorn said Turner’s history is one of a late bloomer. He averaged only 8.5 points a game as a freshman at Ohio State. Two years later, he was at 20.4 and won most of the prestigious individual awards. There was even some talk that the Wizards might take him with the No. 1 overall pick. The Sixers were happy to get him at No. 2.

“He has great size (6-feet-7) and knows how to play,’’ Thorn said. “I think he has a good future, but he has a lot of work to do. If you look at his history, he started out slow and got better. That is certainly what we’re hoping for here, and I think he is, too.”