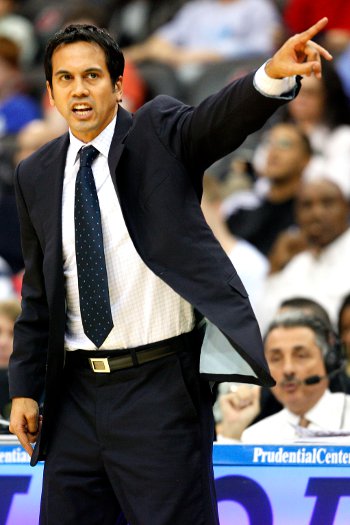 There are a number of ways for a coach to tell if he is getting through to his team. The most critical, of course, is whether his players are working, communicating and executing on the court itself, in line with instruction in practices and meetings. The other comes from what those players are saying, before the games start and after they’re over, not just to each other but also to outsiders in the public and media, on and off the record.

That’s why December had to be such a satisfying month for Erik Spoelstra, especially in light of the swirl of speculation that the young Miami Heat coach encountered regarding his status back in November.

“The guys are starting to speak our philosophy,” Spoelstra said after the Heat’s 98-80 rout of the Lakers on Christmas, his team’s 14th win in 15 games. “And that’s more powerful than anything coming from us, is when they take ownership, on what is our identity. And they start to believe in defending and rebounding and getting out in the open court. They’re seeing success with that. They’re also seeing that it’s not always easy to bring that type of necessary energy each game.”

It must be a surprise for some around the country to see, and hear, what’s been going on with the Heat of late. Many didn’t expect Spoelstra to still be around at all at this stage, not after the Heat’s listless 9-8 start, not with Pat Riley‘s history of stepping down to take over a talented, struggling team (doing it during the 2005-06 championship season), not after comments by LeBron James and Chris Bosh that suggested to some that there was dissatisfaction with how many minutes the stars were playing and how hard the coach was working them.

It seemed most unlikely of all that Spoelstra would survive the debacle in Dallas on Nov. 27.

That’s when players were screaming at each other during third quarter timeouts, Spoelstra and LeBron James bumped on the court during one stoppage and the locker room door stayed shut for 45 minutes after the loss for a players-only meeting. After the team returned to Miami, ESPN.com published a report detailing dissension between Spoelstra and the players, especially James. Since most assumed those comments came from someone inside James’ camp, and since James tended to always get his way in Cleveland, it was assumed that Spoelstra would be sent packing before long. If Riley didn’t want to coach again – and all indications are that he doesn’t – then the team president would need to find someone else.

The conventional wisdom: Spoelstra had lost the team, and couldn’t get it back.

The Heat’s lost just once since.

It has won 14 times, nine times on the road, and won decisively in the most hostile arenas – Cleveland and New York. It has won by smothering on defense and exploiting the transition opportunities that its defense creates. And, with each victory, it becomes more apparent that Spoelstra has begun winning his players over, starting with his stars.

Dwyane Wade was never really the issue, even if his lukewarm endorsement of Spoelstra on Nov. 29 raised some alarms. The star guard was asked that day if Spoelstra, who often worked with Wade individually as an assistant was “his guy.” Instead of backing Spoelstra, he seemed to back away, saying “he’s a different person and I’m a different player than when we came in. So, I’m not going to say he’s my guy, but he’s my coach, you know.”

The next day, Wade clarified, saying Spoelstra was “our guy,” as in the entire team’s. But sources close to Wade have repeatedly stated that Wade would much prefer Spoelstra coach the team than Riley, and nothing this season has changed that preference.

The more legitimate concern was whether James and Bosh would respect Spoelstra, who is intelligent and organized but looks much younger than his 40 years and played just two professional seasons in Germany. It was reasonable to wonder how they would respond to his strict adherence to the Heat way, which is rooted in Riley’s unbending beliefs in five-on-a-string defense and discipline in everything from offense to practice.

They didn’t seem to respond well at first.

Yet if you’ve listened closely to James and Bosh recently, you’ve gotten the sense that “Coach Spo,” as James calls him, is making inroads. During the past four weeks, James has said nothing about Spoelstra that could be construed as criticism, even by a press corps probing deeply for such dirt. James hasn’t said anything close to “he’s who we have,” which was the unenthusiastic endorsement he used to close his first pre-game availability immediately after the Dallas game. Rather, James has flashed smiles at Spoelstra during recent games, particularly when they’re arguing the same side of a call. And night after night, James, Wade and Bosh have all parroted Spoelstra’s principles in press conferences, after conforming to them on the floor.

After Saturday’s win in Los Angeles, James spoke again of the deal that Spoelstra struck with players: “Play defense, and you can run what you want to run.”

So is that it simple?

Spoelstra gave the players more control on offense, and they were suddenly satisfied, and bought into all he was selling?

Not exactly. After all, Spoelstra’s been encouraging players to push the pace since training camp, which is something you’d think they would prefer. He scaled back the playbook considerably from last season, in an effort to allow Bosh and James and all the newcomers to get comfortable. From the start of 2010-11 he hasn’t been overly demanding in terms of his practice schedule, holding fewer and lighter practices than Heat players invariably endured under Riley. Nor it is his style to criticize players publicly; instead, he kept speaking of them in supportive tones, and of the “process” they were going through together.

Honestly, it was hard to see what players really had to complain about, even in November.

The suspicion here is that it had to more to do with what didn’t.

Spoelstra’s consistency, calmness and, ultimately, competence, in the face of adversity has helped solidify his standing. He made some strategic tweaks, heeding James’ wish to play mostly on the wing by inserting a second point guard (Mario Chalmers) into the rotation – and, by necessity after Udonis Haslem‘s injury, always keeping a legitimate center in the game so Bosh could stay at his power forward comfort spot. He helped Wade find some ways to resurrect the star’s forgotten mid-range game.

Mostly, though, he didn’t panic publicly. His press conference performances Monday after the loss in Dallas were among his most mature and confident in three seasons as a head coach; rather than rattled, he seemed energized by the controversy. This summer, after the Heat pulled off its free agent coup, Spoelstra told himself simply to enjoy the experience, that in 25 years, it’d be something he could fondly look back upon. Reporters who cover the team regularly agree that he’s been more at ease, more like himself, than in his first two seasons, even though the spotlight’s been so much hotter.

He has consulted with Riley regularly, more than in the previous two seasons, with Riley providing perspective, linking current events to previous experiences with the likes of Magic Johnson, Kareem Abdul-Jabbar and James Worthy.

Based on how his key players are playing, and what they’re saying, it appears he’s figuring that out.

Ethan J. Skolnick is a sports columnist for the Palm Beach Post