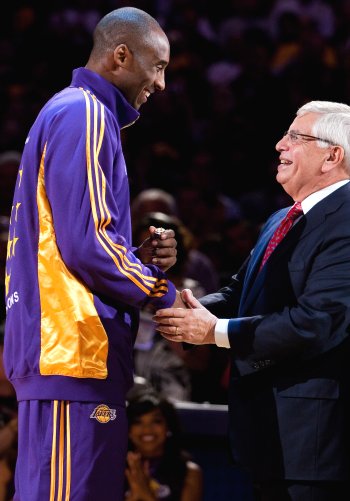 Calling it merely “an interesting detail,” NBA commissioner David Stern has not insisted on, or even expressed a preference for, a hard salary cap as part of the league’s collective bargaining discussions with the NBPA. A hard cap in and of itself (because it could be set insanely low, insanely high, or anywhere in between) has little bearing Stern’s No. 1 collective bargaining priority: ensuring profitability to the NBA’s owners.

At its core, the hard vs. soft cap issue is a parity issue; it pits some owners (the haves, who are willing to outspend others in order to win) against others (the have lesses, who can only spend up to a certain point in order to win), thus dividing Stern’s constituents and making his job more difficult. At the end of the day, Stern just cares that salaries are rolled back to the point where each of his owners can see profits. While he has not spoken preferentially on a hard cap, Stern has clearly stated a strong preference for salary reductions in the $750 to $800 million range.

There are pros and cons to a hard cap. If the NBA and NBPA could agree on a magical figure where players could be content with their salaries and all owners could spend up to the cap and to still turn a profit, the NBA could see an increased parity across the league, as teams in big cities (e.g. Los Angeles Lakers) or teams with billionaire owners (e.g. Orlando Magic) would not be able to stockpile All-Star starters while also having tremendous depth on their benches. Solid, bench players like JJ Redick and Chris Duhon would likely be unaffordable to the Magic under the hard cap; they would likely find increased roles on other teams and be happier for it.

If the hard cap was set at a higher-than-“magical” figure that only some teams could achieve while simultaneously turning a profit (say, $80 million), then, as is the case presently, teams with spendthrift billionaire owners and teams in large media markets would have an advantage over smaller market teams and teams whose owners’ sole business is their basketball team.

Large media markets like New York and Los Angeles already have a recruiting advantage in attracting free agents due to sponsorship opportunities and purported lifestyle benefits; allowing the additional advantage of higher payrolls hurts the ability of teams in smaller markets (or with less wealthy owners) to compete.

Nonetheless, a hard cap of even $80 million would engender more parity than the present system, in which some teams have payrolls approaching $100 million while others (e.g. Sacramento) have payrolls at roughly half of that figure.

Some argue that the NBA is most profitable as an entity when its teams in the biggest media markets are appearing deep into the playoffs and facing off against one another. For instance, 9 of the last 13 MLB championships have gone to teams in large markets (Boston, Los Angeles [well, Anaheim], New York, Philadelphia and Chicago), and Major League Baseball has seen record profits during this span.

According to Forbes, “In 2009 [a year in which New York beat Philadelphia in the World Series], smack in the middle of the worst economy in seven decades, baseball’s 30 franchises turned in a record-high operating income of $522 million, an average of $17.4 million per team.”

While a big-market dominated system might bring in the most money for the NBA as an enterprise, it needs to be accompanied by more robust revenue sharing (as in MLB, but accompanied by reasonable salary floors) to avert financial trouble for teams in small markets and/or with less wealthy owners.

One of the softest features of the NBA’s current soft cap, the Larry Bird Exception, is also one of the most double-edged. The Bird Exception allows owners to re-sign their own free agents at higher salaries than would be available to them on the open market, even if the owner’s roster is already over the salary cap. The underpinning of this rule was to allow teams (e.g. the Boston Celtics) to prevent a transcendental superstar (e.g. Larry Bird) from getting away simply because the team had other, pre-existing salary obligations.

In time, the Bird Exception has turned into an enabler for well-to-do franchises, allowing stacked teams to get even deeper. This system particularly benefits teams who draft well and are able to spend liberally. By taking a team payroll up to the salary cap with free agents and surpassing it in future years by signing quality players under the mid-level exception, continuing to re-sign valuable free agents under the Bird Exception, and recruiting quality role players under the minimum salary exception, behemoth teams like the current Los Angeles Lakers or Boston Celtics can be built.

By affording Bird Rights to players with far-from-transcendental talent, NBA salaries across the market have grown inflated, making it increasingly difficult for smaller-market teams with non-billionaire owners to simultaneously compete and turn a profit.

The rampant promulgation of the Bird Exception has made the soft cap softer than it was ever intended to be. NBA owners with already costly payrolls re-sign restricted free agents or free agents with Bird rights, matching and beating lucrative offers from other teams (1) because it makes their team better and (2) because they can.

Recently, the Jazz matched Portland’s offer to keep Paul Millsap and the Magic matched offers to keep Marcin Gortat and JJ Redick. Using Bird Rights this way has resulted in bloated rosters for Utah and Orlando (6th and 2nd league wide in team payrolls, respectively). With these contract precedents floating around, other players’ salaries have likely risen as a result. With all due respect to the aforementioned players, they are not Larry Bird.

NBA owners with a passion for winning and a pocketbook to enable that desire often extend Bird offers to bench players, opting for a little extra firepower to ensure championship contention. For example, a team that is substantially over the salary cap (e.g. Los Angeles Lakers) may have the choice between keeping a useful player or letting him go (e.g. Derek Fisher or Shannon Brown).

Because the team would only be able to sign a minimum salary player in the Bird veteran’s place, and because the deep-pocketed team views itself as worthy of contending, the player is re-signed. This system allows great teams to improve (as long as they’re willing to pay for it) at the expense of the rest of the league, resulting in other teams becoming incrementally less competitive.

In order to prevent great teams from perpetually reloading while still preserving the most important aspect of the Bird Exception (keeping players who are truly “franchise players” [which implies that there can be only 1!]), the new CBA could allow teams to possess one player on their roster at any given time who has been given the salary bumps consistent with a Bird Veteran and/or for whose salary the team has exceeded the salary cap. This player would be the team’s “franchise player,” and for as long as he is under contract with the team, the team could not be permitted to exceed the cap to sign its other free agents.

Effectively, this would be a hard cap with a single exception. It would prevent the rich from getting perpetually and unstoppably richer. In other words, the Lakers would have to choose between re-signing Kobe Bryant, Pau Gasol or Lamar Odom, unless they could sign two out of the three with available cap space.

This could result in increased player movement but would keep leaguewide salaries more under control and would allow for greater parity. Assuming that the soft cap (allowing the lone Bird Exception) was $70 million, the Lakers could have $69 million in contracts committed for a given season and then sign Bryant to a max contract as their “franchise player.” The Lakers could be made responsible for paying hefty luxury tax obligations for this transaction’s detrimental effect on parity, as explored further in our forthcoming blog on revenue sharing.

At this point the soft cap has made it hard for all of its teams to meaningfully compete. As such, the NBA should take a hard look at reforming it.