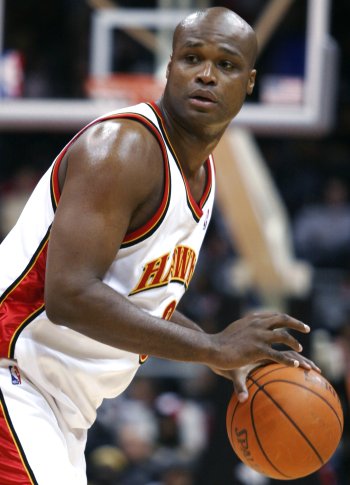 You could make a case that since the NBA’s developmental league debuted in 2001, there has not been a more celebrated or marquee player to pass through than Antoine Walker. He is currently plying his trade for the Idaho Stampede in one final attempt to make it back to the NBA, where he won an NBA title with the Miami Heat, made three All-Star appearances as a Boston Celtic, and earned more than $100 million over 12 seasons.

Walker joined the Stampede in the first week of December after failing to earn an invitation to any NBA training camp. (He had worked out in Charlotte before camp opened, but was unable to secure a spot, despite a long friendship with Bobcats boss Michael Jordan.)

The last time Walker played in an NBA game was February 19, 2008, an eight-minute cameo for the Minnesota Timberwolves. It was his 893rd NBA appearance. The Wolves traded him to Memphis on draft night 2008 (he was part of the Kevin Love–OJ Mayo deal) but he never suited up for the Grizzlies. Memphis bought Walker out in December 2008.

The Grizzlies were his sixth NBA team. Will there be a seventh? That is what drives the 34-year-old Walker these days. He says his financial and legal difficulties are behind him. He said he’s in shape. He’s chosen a route back through the NBA’s minor league, rather than cash a check in China or Turkey, as his fellow 1996 draftees, Stephon Marbury and Allen Iverson, have done.

It’s a different life. He flies commercial. He doesn’t stay in Four Seasons. He makes exponentially less money than he’s accustomed to making. He’s playing before crowds he hasn’t seen since he was a high schooler in Chicago. He called the entire experience “humbling” and he’s right.

“It’s the best way for me to get back in the NBA,’’ he said recently on his first visit to New England as a member of the Stampede. “When you go overseas, you kinda get out of the loop. This way, teams can still follow me and with the affiliation of the D-League, I can be watched. This is the best way to do it because you have so many guys trying to get back. It’s the best route for me. The competition is great. It’s a good thing for me.”

These next few weeks could be critical for Walker, who is averaging 17.3 points, 6.5 rebounds and 4.0 assists a game for the Stampede. The NBA started allowing 10-day contracts to be signed on January 5 and, from January 10-13, all of the D-League teams will be participating in the annual showcase, this one in South Padre Island, Texas. Most NBA teams have representatives at the Showcase.

Historically, there are not many D-League callups before the showcase. But since the event was launched in 2005, eight players got called up during or just after last year’s showcase.

So far, according to two NBA general managers who spoke on the condition of anonymity, there has not been a lot of “chatter” about Walker making it back. One of the GM’s said he had seen Walker play three times and came away utterly unimpressed. He said Walker didn’t appear to be in shape and that the issue with his bad knees will make NBA teams very wary. He said he’d love to see Walker make it back, but doubts it will happen.

The other GM noted Walker’s age and said if he did make it back, it would have to be on a certain team. “He couldn’t join a young, rebuilding team. He didn’t want any of that with Minnesota or Memphis. It’d have to be a special situation.”

Walker may have lost some of his explosiveness and quickness, but he has lost none of his trademark confidence. As he put it recently, “I left the game not on my own merit. I still believe I can play. I left the game way too soon and I want to get back.

“I’m a very unique player’’ he went on. “There aren’t many guys in the league who can do what I do. At my size, to be able to space the floor, take you off the dribble, make plays. I think there are only a handful of guys who can do that. And I have the experience. I’ve played in big games. I’ve won a championship. I bring a lot of experience to a team.”

In his prime, Walker was as versatile a player for his height (6-10) as there was in the league. He could rebound. He could pass. He wasn’t a great shooter, but he put up numbers. Midway through his career, he became infatuated with the three-point shot despite low-percentage numbers from the distance.

He’s still hoisting threes for Idaho, averaging more than five a game. (He had one game where he shot 12 and another 10.) He’s still not hitting many of them (37.5 percent) but he is averaging more than 32 minutes a game for the last-place Stampede. He’d simply like to translate those minutes to an NBA team looking for veteran help down the stretch and in the postseason.

His former coach in Boston, Doc Rivers, said whatever happens to Walker, the ex-Celtic has set an example of sorts.

“The thing I love about this is he is saying, ‘I want to do this and I’m going to do this no matter what people think or say,’’’ Rivers said. “I don’t know what will happen to him, but I love the fact that he’s doing it the way he’s doing it.”