Sterling will let Griffin down

Sterling will let Griffin down 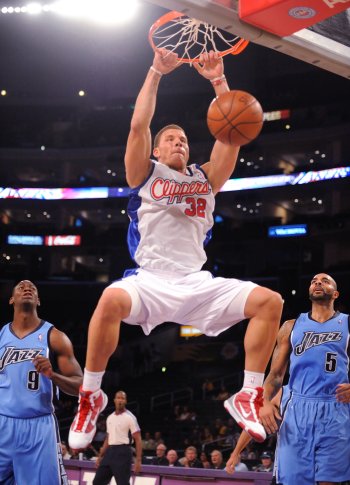 He is doing hard time in L.A., feasting on Euros nightly and attempting to stamp his forehead on every rim in the NBA. Nobody in this city cares about the Clippers record. They just want to know if Blake dunked last night.

So far this season, he leads the NBA with 86 dunks and counting. He will not stop until indecency charges are brought forward by the state.

I’m not exactly sure who coined the term or the first time I heard it. But it fits. Maybe it’s because I’m still thinking about how he did Knicks center Timofey Mozgov back in November. The illicit assaults on the rim have helped the Clippers achieve gains in attendance and television ratings.

Per game averages of 22 points and 13 rebounds signal the making of a superstar and the entire league is ready to pounce – angling for another free agent frenzy. Owner Donald Sterling will surely make Griffin play out his time in a Clippers uniform. Sterling realizes that he scored the Louisiana Purchase on a rookie scale deal, for the next three years. A max contract will be dangled Griffin’s way too, the minute it’s allowed under the CBA.

There will be promises about improving the roster and building around Big Bad Blake but it will all be in the name of crowd-pleasing. Winning has never been a priority for Sterling and Griffin isn’t going to change that, regardless of his exquisite talent.

The Clippers are 13-24 this season, winning eight of their last 11 games. They’ve likely put themselves out of the running for a playoff spot thanks to their horrendous start. Griffin and Eric Gordon have shined for the Clippers this season and they will be headlining Sterling’s marketing campaigns in future years to come.

There is no denying the excitement. Darius Miles and Quentin Richardson had Clippers fans believing a damn near decade ago. It was fun to watch – two charismatic young and innocent talents before they became tainted by injuries and the realities of the league. They never had a chance here. Griffin’s level of excitement far exceeds Q and Darius’ Clippers reign.

The 6-foot-9, 250-pounder will headline the NBA dunk contest during All-Star weekend, further pushing his profile to new heights. He will say all the right things like he always does and he might even give Sterling a chance to honor a commitment to winning, but he will be let down in the end.

Unfortunately, Sterling has plenty of leverage in this situation. Fear of a serious or career-ending injury makes passing up on a max deal a very dangerous proposition. Griffin is represented by agents Sam Goldfeder and Jeff Schwartz. They are top notch agents and will surely work closely with him to make a thorough evaluation.

My hope is that Griffin can withstand the powerful allure of a max deal. No one in Los Angeles will hold the departure against him. Consider it The Anti-Decision: everybody in town will understand, expect and encourage his growth elsewhere.

Griffin can slide out of here without a presser, live TV special or phone call to Sterling. There is no need because he will be doing the right thing. Oklahoma is the play. Humble hometown kid returns home to shine for his local team, the Oklahoma City Thunder. We will deem him a hero, an honorable man who withstood the riches of the big city to return to the comforts of home.

We can even sign the contract at a local Boys and Girls Club.