Andrew Bogut: "Am I the same player? Close"

Andrew Bogut: "Am I the same player? Close" 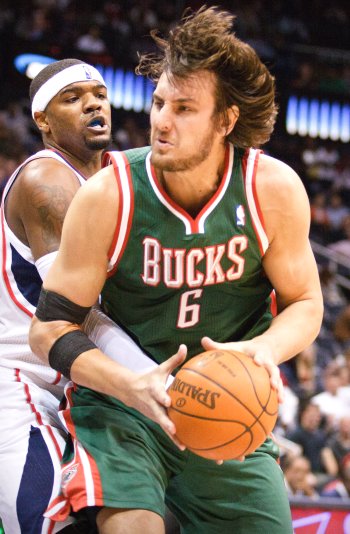 How does it feel to be back on the court after what you went through with the injury last year?

Andrew Bogut: It feels good just to be playing basketball again first and foremost. Whenever you have an injury like that the rehab process is excruciating and long and all you can think about is, “Will I be back and will I be the same player?” I am back. Am I the same player? Close. Offensively I am still struggling a little bit with my arm. It’s going to be a situation where it will probably take a couple of years before I am fully comfortable with it again.

How painful was the injury when it happened?

AB: It was very painful. It was the most pain I ever felt in my life. I broke three things and dislocated my elbow too so it wasn’t just one thing that was throbbing, it was my whole arm. It was one of those things where it was hard to push through it. When I got to the hospital I got some morphine and felt better. Once I had the surgery it was still bad for 2-3 weeks, maybe a month. I had to take some pills for pain because it was really didn’t stop throbbing.

When you were injured, would you agree that you were playing the best basketball of your career at that point?

AB: Definitely. I found a little groove there after the All-Star break. Everything came together. It’s a shame how it ended but that is a part of sports.

Health-wise, where are you right now, percentage wise?

AB: It’s hard to say. I don’t think I will be 100 percent this year. My arm is still giving me trouble especially shooting the ball, trying to get consistent because I don’t have range of motion back and I’m really taking a hit this year, shooting the 60’s to 40-something this year (from the foul line). So that is the area that has affected my game the most. But rebounding and defensively I feel pretty good.

What did you do to rehab and get back sooner than many expected?

AB: People don’t understand that. As soon as I got the cast off around late May, I was basically doing two hours every morning and a bunch of strengthening and weight work strengthening my wrist, elbow. I couldn’t touch a ball and didn’t touch one literally until August and then I had a setback then. At one stage I was doing rehab twice a day. I was doing rehab in the morning, then going to work out and do more rehab in the afternoon. It was a five to six day a week thing and I had to do it. Just having one day off, say on a Sunday, I would lose my ability and it was frustrating.

Despite your record, the Bucks are in the playoff hunt in the Eastern Conference. Does that energize you too?

AB: Oh yes. The chance in the East is right there. You have to win three or four in a row and all of a sudden you are in a playoff spot. We’ve been up and down and much like a yo-yo and a roller coaster. We’ve played well against some good teams and lost to some bad teams. We have to keep plugging away and have had the toughest schedule in the NBA percentage wise, so that works in our favor. Right now we have to win games. It’s as simple as that. Winning games brings confidence and once you get on a roll and start making shots everything feels much better.

When you were the overall No. 1 player in the 2005 draft, did that bring extra pressure?

AB: There always is. And I wasn’t ready to play in the NBA my rookie year. I had to come out because I was going to be a Top 3 or 4 pick. As far as skill level, I was definitely ready, but physically, I was 230, 235, playing the four-five spot in this league doesn’t cut it. I tried to stick with it and I knew I wouldn’t have a great year coming in just because my body wasn’t where it needed to be. In the draft process after the sophomore year I had in Utah, I would have been crazy to stay in school another year. I came out and sucked it up my first year. The thing that I’m proud of is that I have gotten better every year and I still try to do that.

It must have been humbling to have the start to your NBA career that you did?

AB: Definitely. That is what I needed. I needed to get my ass kicked for a while. Because in college I had done everything and I didn’t think that those guys in practice pushed me every day and got me better, so I thought staying in college kind of set me back so I wanted to come in and have that challenge of having guys way better than me and learn from them and get better.

Despite coming back from your injury, you have been mentioned this year as a potential All-Star. Do you think of that?

AB: Yes, I do, to be honest with you. Last year I thought I should have probably been somewhere around there as well. Obviously our record could play a part in that this year. If we can get some wins these next couple of weeks and get on a run, I think I’m definitely up there. I lead the league in blocks, have been a tough rebounder and another goal is to be an All-Defensive player as well.

When you come back from an injury, does it make you appreciate being able to play more?

AB: Yes, definitely. It does and it doesn’t. It’s been frustrating too. I have had some games and practices as well where I can’t do the things I’m used to doing because of my injuries. You can’t sit there and cry about it and have to keep pushing through it, but there are days where I think, “Did I rush back too soon?” But when you really think about it to be playing basketball after an injury like that, lot of people say I should have stuck my arm out (during the fall). Look at the consequences if I stuck my arm out, I could have landed on my neck or back and have a career-ending injury.