Stuck in the Middle with Al Manama

Stuck in the Middle with Al Manama

Well I don’t know why I came here tonight,

I got the feeling that something ain’t right,

I’m so scared in case I fall off my chair,

And I’m wondering how I’ll get down the stairs,

Clowns to the left of me,

Jokers to the right, here I am,

Stuck in the middle with you.

Yes I’m stuck in the middle with you,

And I’m wondering what it is I should do,

It’s so hard to keep this smile from my face,

Losing control, yeah, I’m all over the place,

Clowns to the left of me, Jokers to the right,

Here I am, stuck in the middle with you.

Greetings from the Kingdom of Bahrain,

The Diaries continue their travels throughout the continent of Asia recently taking control of the Al Manama Basketball Club in Manama, Bahrain.

Unless you are an astute student of geography, have a loved one serving with the United States Central Naval Command (5th Fleet) or recently played a game of Trivial Pursuit… The Kingdom of Bahrain and its local may be a mystery to most of you. Dust off the family Atlas, open it up and go to the “M’s” – as in Middle East… There you’ll find, just a scant 12 miles of the coast of Saudi Arabia in the Persian Gulf, the island country of Bahrain.

The Diaries are all about extremes, having at one time served in the world’s most populous country (China), we have now moved our laptop, whistle and out of bounds plays to a country 34 miles long, 11 miles wide and a population approximately 1,200th that of China – or 1.05 million citizens. 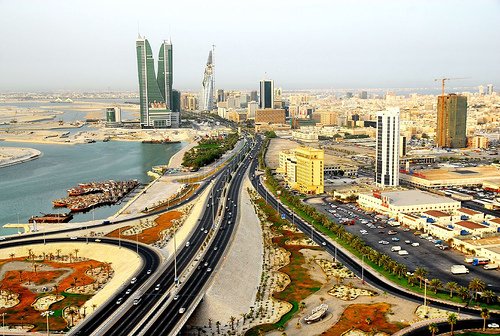 Bahrain is an island country, actually an archipelago of 33 islands, with The Diaries setting up shop on the country’s largest island (Bahrain) and it’s capital city of Manama (population roughly 700,000). An archipelago, for the record, is a large group or chain of islands… Stick that in your “Word of the Day” Rolodex. The average year round temperature in Bahrain is a balmy 80 degrees, the sun shines 365 days a year, rainfall is minimal and because Bahrain is surrounded by water the humidity can cling to you like a groupie at a Justin Bieber concert.

And while Bahrain is home to some one million citizens, over half of this tiny islands inhabitants are non-nationals. Take a stroll up Al Shabab Avenue and you’ll see folks from Europe, Africa, India and, of course, the United States. Arabic is the official language of Bahrain, however the majority of the population speaks English as well.

Enough of the logistics.

Unfortunately, over the past four years, Al Manama has been shut out, “goose egged” of championships and Cups. Enter the American coach and his worn out passport.

Unlike China, learning every ones name was a breeze. Roughly 15 people associated with the club (players, staff or management) go by the name of Muhammed, another eight check in as Ahmed. Our team manager is a gentleman from India named “Shaff” and our team president is one Mr. Zuhair Kazerooni.

And a coach named Rab.

Put it all together and you have either one of the Gulf regions most prestigious athletic clubs, a best selling book or the makings of a hit sitcom on FOX.

I have thoroughly enjoyed my short time in Bahrain. The people are warm, kind, generous and absolutely nuts about basketball. Manama’s fan base is by far Bahrain’s largest and most vocal. Walk into a Manama game at Zain Arena and you’ll think you are either on the sidelines of a World Cup soccer match or in a mosh pit at an Aerosmith concert. Drums, whistles, flags… Tou name it. If it makes noise or signifies their love for Al Manama, our fans bring it, swing it and ring it. About the only things you won’t find at a Bahrain Basketball Association game are popcorn (the locals prefer dates and sunflower seeds) and women (99.9 percent of those in attendance are men). So much for that huge “groupie” following I was hoping to cash in on.

The journey continues, my friends… We haven’t reached Marco Polo status yet, but give us time.

From the Gulf with love,