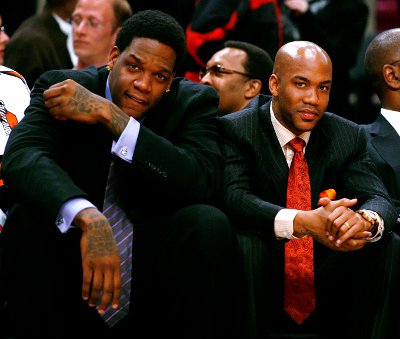 One of the biggest problems in today’s NBA is the existence of high-priced, cap-killing contracts for players who are not worth anywhere near in the present what their teams committed to pay them in the past. One glaring example of how this has crippled an NBA franchise is the Knicks’ contract with Eddy Curry. Curry was signed-and-traded from Chicago to New York in 2005. He has made over $50 million in his six years with the Knicks despite having played only 74 minutes since the start of the 2008-09 season (closing in on a 200-game span).

Knicks’ president Donnie Walsh inherited Curry’s toxic contract from the Isiah regime, a regime which also paid Stephon Marbury over $20 million not to practice or travel with the team in the final year of his deal. Trading Curry’s contract would be extremely difficult, and voiding it was not an option despite the fact that Curry was unable to crack the Knicks’ rotation in his final three years with the Knicks (years in which he collectively pocketed over $30 million).

When it came time to clear cap space for the lucrative Summer of 2010 free agent class, Walsh was forced to make deals that he would not have made (e.g. sending a first-round pick, Jordan Hill and Jared Jeffries to Houston) had Curry’s contract not been guaranteed for six long years.

Is the solution to this problem simply to shorten the maximum player contract length? No; to do so would be an overreaction to the problem. To do so would punish players deserving of lucrative, long-term contracts. Kevin Durant, Dwight Howard, LeBron James, Chris Paul, Rajon Rondo, Deron Williams, Derrick Rose… Teams should be able to make long-term commitments to bona fide superstars.

The problem occurs when a large-market and/or multi-billionaire owner, who is in a position to gamble on a player’s future health and productivity, does in fact make the gamble. The result is salary cap inflexibility that even a fat checkbook can’t cure. The Knicks’ issue with Eddy Curry’s contract was not as much the wasted money as the wasted cap space. Even if Curry accepted a buyout, his sizeable buyout would count against the Knicks’ cap, making it impossible to add a player of equal salary in Curry’s place.

A guaranteed eight-figure annual salary for a player who is not worthy of playing time is not merely a problem for NBA owners and GMs. Fanbases lose out when their GM is pinned under a toxic contract; their teams can be prevented from contending for years into the future. NBA fans resent paying their hard-earned money to finance the exorbitant salaries of bench warmers. Finally, there is less available salary for NBA players who do contribute when eight-figure salaries are committed to cap-eaters.

One possible solution to this problem would be to reduce the number of players in the league who are eligible for maximum-length contracts. At present, any player who has neither been waived nor changed teams as a free agent within the previous three years is eligible up to a six-year deal if he signs with a team possessing his Bird Rights.

There is no limit to the number of players who may be offered long, lucrative, and guaranteed contracts; therefore, there is no limit to the downstream risk of salary cap inflexibility that a team can undertake. In the event that some of these contracts turn toxic and untradeable, mortgaging a team’s future (in the form of pairing the toxic contract with young assets and/or draft picks) becomes the only way out.

To solve this dilemma, the next CBA could limit the number of five-year and six-year deals that each team could originate within a given time period. One extreme might be to allow each team to originate up to one five year deal and one six year deal every year.

Another extreme would be to allow teams to offer five- and six-year deals once every five or six years, respectively. In addition to preventing the likelihood of toxic contracts, a more limited number of long-term deals could allow teams that now struggle to compete in free agency to have something unique and lucrative to offer free agents.

A system limiting the number of five- and six-year deals could reduce the likelihood of superteams forming (as one of Miami’s Big Three would have had to accept a four-year deal). While teams like the present-day Miami Heat are great for business, what they leave in their wake couldn’t be worse (Raptors: recent losers of 13 straight; Cavaliers: losers of an NBA-record 24 straight).

A final aspect of this idea would be to allow teams to buy out a player in the last year of his deal every certain number of years (perhaps once every two years) and not have that money count against the team’s cap. So, effectively, a team could at least relieve itself of the final year of a toxic contract from a salary cap standpoint. The player would, of course, have to agree to the buyout. The NBPA would be on board with this idea, as more, new money would be available to its players.

Under a system that limits the number of 5+ year deals and allows teams to buy out players without suffering a cap hit, cap-eating contracts would be less likely to cripple teams, the overall talent level in the league would rise (because non-contributors would be replaced with contributors), and the overall money spent on players would increase. All stakeholders would like parts of this idea and dislike others, a key ingredient in the recipe of compromise.