Melo setting an example on how to handle rumors

Melo setting an example on how to handle rumors 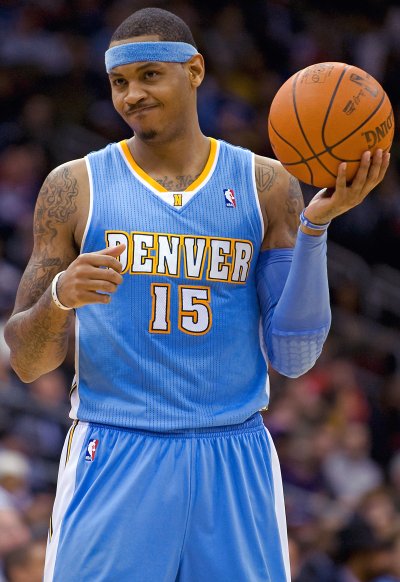 I remember in 1985 when I was entering my contract year with the Kings, which coincidentally was the team’s first year in Sacramento. When the franchise left Kansas City, I remember teammate Reggie Theus said Sacramento was not in California. I didn’t care much for those things. We had no choice in the matter, so why complain?

The reality with a pro sports career is that you have an opportunity to make great money, live an exciting lifestyle and, most importantly, retire in your late 30’s. Take a vote about most desirable careers. Pro sports would certainly be at the top. So why not enjoy it?

I am amazed every year around this time when we approach the trade deadline. I know it brings great intrigue and excitement for the media and fans, but I continue to see the anxiety level of our players go to silly levels, especially when it comes to the word “rumors.”

Back in the day, a player’s stance on rumors was simply, “Man, I am glad somebody wants me and I still have a job.”

Today? “I can’t understand why my team is giving up on me” and “I want to stay.”

The science behind this reasoning is two-fold – young players entering the league and AAU basketball.

The chase for these “young stars” begins in middle school. They become smothered with praises to the extent they never hear the negatives. When they finally reach the pinnacle, they are flabbergasted when someone throws their name in a rumor mill. They have been shielded from the negative all their amateur life and now take business decisions as disrespect.

There are some very good AAU organizations that actually teach and prepare, but a majority of them are not preparing these young men for what is actually going to become a job and not just a game.

What they need to hear is this: Enjoy the game by staying in college as long as you can, because if you are fortunate enough to ascend to the professional ranks it becomes a job like any other job – except if you are good and understand the business you can have a tremendous amount of success, happiness and make a lot of money playing a game!

Millions of people lost or changed jobs over the last five years and every one of them did what was expected. They picked up a newspaper to look for a job or called a friend to inquire about another opportunity.

Being mentioned in a trade rumor is not a negative thing for a player because it means you will still have a job.

The scary words are cut, release, waived, decline, retire… But trade means someone still wants you and you have a job.

The pressure that this word has put on players over the years has basically hurt them in the back end of their careers because they become non-trusting and bitter.

I encourage all players to embrace the history of the game and they will know that very few players played on the same team their entire career and even those players were subjected to rumors. I will agree that with our enhanced social networking, the stories and comments can get out of hand. But I doubt today’s players would trade the money they make for the salaries players were getting back in the day. If you like the improvement in pay, ignore those other things.

Wilt Chamberlain, Kareem Abdul-Jabbar and Oscar Robertson all got traded in their prime. That should be enough to cast off the rumor mill and continue to focus on the responsibility at hand.

I must admit that I am a little worn down about the Carmelo Anthony trade rumors, but at the same time I am extremely impressed at how he has handled it on the court. He just got 50 points and 11 rebounds against the Rockets. His effort on the court has been splendid and every player should take notice of how professional he has been in regards to his job despite his name being tossed around in multiple scenarios.

Anthony wants to play in New York. I really don’t know how he and Amare Stoudemire would co-exist, but I am sure the Knicks would love the excitement it would bring trying.

As I write, another rumor just jumps out at me involving the Lakers and Anthony. Anthony should be excited that he is so much in demand and the players involved should be delighted that the Nuggets want them in return even more so.

(Note to the Nuggets: Don’t seal your fate in the Western Conference by giving the Lakers two more championships by allowing them to have the two best all-around scorers come crunch time. I know Gregg Popovich is drinking shots of tequila right now after hearing the latest rumor).