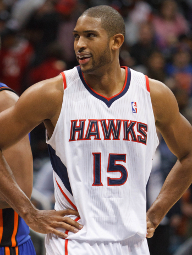 A lockout is a possibility after this season. How concerned are you about that?

Al Horford: Well, we’re worried because the truth is we don’t know what’s going to happen. I hope the lockout doesn’t happen because we want to play, but we don’t know what will happen. There’s a big deal of uncertainty.

Do you think players are getting ready financially for what could happen?

AH: I hope so because we’ve been told about this for two years already. They have told us the likelihood of a lockout was big and we had to get ready.

What will you do if there is no NBA season?

AH: Keep practicing. The biggest thing is staying in shape. And well, let’s see what happens, if I have the chance to play at the pre-Olympic tournament I will do that. We’ll see how that works.

Playing overseas is an option?

Have you talked about this with your agent?

AH: Not with my agent, but I know the possibility is there.

Do you think other players will do that?

There was some criticism last year about your selection to the All-Star Game. This season pretty much nobody complained when you were announced as a reserve. How do you feel about that?

AH: You know, there’ always going to be criticism – positive or negative. I believe that in my case the reason I was there was the coaches wanted it to be like that. The coaches felt that I was good enough to be here at this level. I have no control over that. I just work hard and put effort to put myself in a position that allows me to be here. And I feel blessed to be here.

In which aspects do you feel you’re a better player compared to last year?

AH: I’m more aggressive offensively. This year’s coach is giving me more freedom to go out and play and that has helped me a lot.

Are you happier with Larry Drew than with Mike Woodson?

AH: No, I liked Woodson, you know? It all comes down to my maturation process as a player and being able to fit better with the rest of the team.

How have the Atlanta Hawks changed as a team with this new coach?

What’s your take on the point guard position? Seems like the team is searching for help there. Mike Bibby maybe is a little old, Jeff Teague maybe is too young… Is that the team’s weakest spot?

AH: Well, I think Bibby is doing a good job, although it’s clear that in the future we’re going to need another person. We don’t know for how long he’s going to be able to keep it up.

Is Atlanta a contender or you’re not there yet?

AH: I think we’re not there yet, but I think we can get there.

How many pieces away from contending?

AH: I think this team we have now is a good team and we can do something special with this team as long as we play the right way.