Manu Ginobili: "I would not like to play for another team"

Manu Ginobili: "I would not like to play for another team" 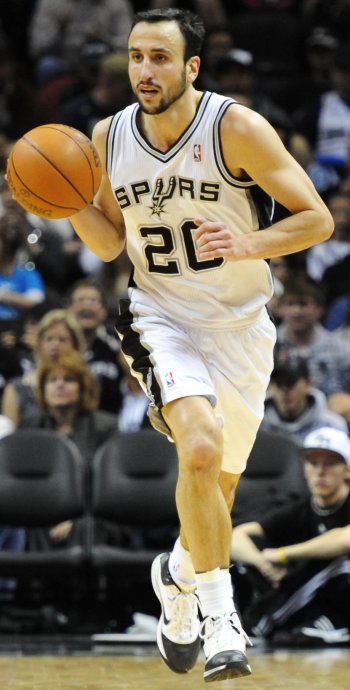 Is this San Antonio’s last real shot at the title?

Manu Ginobili: If you hear the questions we were asked last year, it’s the same thing. They were asking us if it was our last chance, if it wasn’t in us anymore. We won 50 games only then and now that we’re where we are, they are talking about the next one.

For how long do you think the Spurs will be contending?

MG: Who knows. It depends on our health. Right now I can tell you if anything happens to Tim (Duncan), Tony (Parker) or me or any other key player, the chances decrease dramatically. So far we’ve been healthy, but no team wins without health. It’s a matter of waiting. Why do we have to keep guessing?

Now you’re a father. What kind of impact does that make in you as a player?

MG: I think the main thing is after the game. I’m very critical with myself. When I was younger, I would take losses very hard and the wins would get me too pumped up. Now on the court it’s the same. I just play. But when it’s over… I may have lost at home against the worst team in the NBA and go back home, see my babies laughing and it’s a whole different perspective. Being on the court, I feel no changes. I still have the same desire. It’s the post-game that changes more than the game itself.

Has your NBA career surpassed the expectations you had for yourself coming in?

MG: It has surpassed all my expectations. Coming into the NBA, I never thought I would play an All-Star Game. While I was playing in Italy, if you told me I was going to be a three-time champion, I would have said you were crazy. No chance.

Did you see yourself as a starter?

MG: I thought I could play well and have success. But a more moderate success. I would never dare to dream I could be a two-time All-Star or something like that. It makes you happy looking back 10 years ago what was going on then.

Are you going to stay in San Antonio once your career is over or are you moving back to Argentina?

MG: I always thought and still believe I will end up living in Argentina. But I don’t know. I have a few years left and I have my kids that are just nine-month old… When the time comes, we’ll sit with my wife and see which way we go.

Can you see yourself working for the Spurs once you’re done playing?

MG: No. Full-time, for sure not. Maybe helping them out as a scout or representative in some manner, something like that. But I don’t see myself doing an 8-to-5 job every day.

And playing for other team?

MG: No. Two years ago, I thought it was possible for me to leave since I was going to be a free agent and had not heard from the team. I was starting to make my mind up that maybe it was time to go somewhere else. Then everything improved. My contract was extended and today I would not like to play for another team.

If there’s no NBA season, would you consider playing in Europe?

MG: It depends. For starters, no. Sure not. If January comes and there’s no agreement and the season is suspended, then I may consider that.

Any preferred destination if that happens?

MG: Italy or Spain probably. But again… Not all players are going to be able to go to Europe. There’s no room for everybody. Second, not many teams are going to sign players knowing they may be gone the following month. And I would not like to do that either. So if I know the season is canceled I would consider it more seriously in January. It’s a matter of waiting. But more than likely I will stay put working out and getting ready.

Is the voice of the international player heard at the Players’ Union?

MG: If it’s not heard, it’s our fault for not being active enough. The problem with international players, sadly, is that we are all from far away and when the season comes to an end, we want to go back to our homes or play with the National Team. We don’t have much time to go to the meetings, take part in it more closely. It’s our fault. If we went to those things, we’ve be heard as much as the others. I’m pretty sure about it because they always insist on having international players becoming more active.

Are you concerned that there’s no replacement for the guys from your generation in Argentina?

MG: I’m not concerned. I know there’s a lack of players, but you also have to think that this generation was extraordinary, very uncommon for our country… We enjoyed it very much, we are still enjoying it and we have to take advantage of it. When we go back to what we were before (probably), well, we don’t have to have a big head like it’s a failure if we don’t make it to the semifinals. You have to keep fighting and do as best as you can.

Do you think they have made a good job at promoting basketball in Argentina given the success you’ve had?

MG: I can’t tell that. Our generation started to make some noise in 2002, then 2004. If the kids started playing then and they were six-year-olds, they’d be too young still so we don’t know if that generation can leave a mark or not.