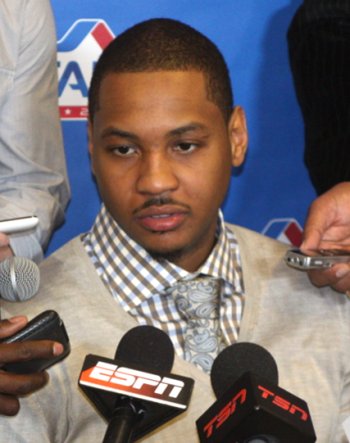 The trade finally happened and the way it went down did not surprise me based on what has transpired over the last five months or so. The bottom line was that Carmelo Anthony always wanted to go back home and he strategically planned it and was encouraged by the boldness of his good friend LeBron James leaving a 60-win team in Cleveland for Miami.

I don’t think he realized it would carry on for half of the season. It was his representatives’ mistake to make him think that by turning down a three-year extension during the summer the Nuggets would heed his request and send him to New York before the season started.

I would have done the same thing if I wanted to keep an asset while having a few months to actually make a decision. It gave the Nuggets time to change his mind. It gave them time to maybe win some games and thus have Anthony believe they could win the Western Conference. It gave them time to make Anthony think about that $65 million on the table while running the risk of injury. It gave them time to allow Anthony a view of how he could fit in with Amare Stoudemire. And, most importantly, it gave them a chance to get a multitude of teams other than New York interested – thus making sure they got the best possible deal for a star player.

The only trades that ever seem to work when it comes to superstars are star-for-star or plenty of draft choices. Well, the Nuggets knew they were not getting a star because Anthony held the cards, so they waited till a number of teams would put pressure on the Knicks to get off that high horse they were riding knowing Anthony only wanted to play for them.

The plan almost backfired when New Jersey backed out of a trade the Nuggets actually wanted and almost backed the Nuggets into a wall where I felt they would have called Anthony’s bluff and actually wouldn’t trade him knowing it could have cost him $15-to-20 million. A new collective bargaining agreement on the horizon might have forced him to sign the extension.

I wish I was a fly on the wall when the Nuggets’ brass called New Jersey consistently over the last month or so begging them to at least present something to force their rivals to give up more than they wanted to. The plan worked.

The Knicks probably could have had Anthony a few moths ago if they had offered this package minus Timofey Mozgov back then, but their posturing – making Denver think Anthony would play out the year and sign with them anyway – cost them Danilo Gallinari and Raymond Felton. I believe they probably could have kept one of those players, especially based on the fact Denver had no other concrete deal at the time.

So give New Jersey credit when they effectively won by just bluffing knowing Anthony would not sign with them, thus eliminating a Knick juggernaut this year by forcing them to trade four starters. The Nuggets needed help to offset a Gotham City caper and the Nets are rejoicing today knowing they forced the Knicks to dismount.

Still, I believe the trade favored the Knicks. It is extremely difficult to replace the best all-around offensive small forward in the game. Anthony also is one of the best closers in the league and that is worth 5-to-10 extra victories a year.

The only way the Nuggets replace that is getting Kevin Durant in the deal. The role players the Nuggets received were attractive because of the Knicks’ system and the fact they were playing with Amare Stoudemire, but they will struggle now because those open shots will be non-existent. The Nuggets’ top two scorers are in New York (Anthony and Chauncey Billups) so without a go-to player those guys become easily guardable and look clueless.

The draft picks and cash should be wisely researched and used because that is the only way I believe this deal with turn out to be a favorable one a few years from now for Denver.

The Knicks are set to take off with Amare and Carmelo over the next few years because players will now flock to New York as free agents. New York is now effectively in the national spotlight again.

The turnaround will be bumpy initially because of what the Knicks gave up in role players, but slowly they will arrive and if these two stars can co-exist I believe they become a serious threat along with Miami over the next five or six years.

The challenge for Mike D’Antoni is to change the loping running style of Carmelo into a sprint to fit his system, because Anthony needs post-up opportunities and players jacking up quick threes will be detrimental to his game in the long run. Anthony could become the power forward offensively in terms of post-up ability, thus forcing whoever is guarding Stoudemire to be in a help position. That would be devastating defensively for any team.

Also, we should not forget that Billups is an excellent pick-and-roll player and he will salivate at the wide open shots he will get running this system with these two explosive scorers.

The Knicks will definitely be a problem in the playoffs and if they can secure a fourth or fifth seed, they will definitely reach the second round this year. Guaranteed!