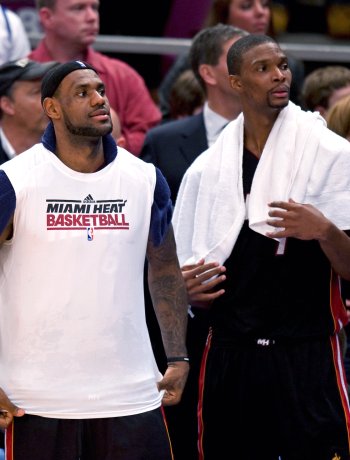 Several months ago, Ken Berger of CBSSports.com confirmed that the NBA would be approaching collective bargaining talks with an eye to reducing existing player contracts (contracts “guaranteed” for the 2011-12 season and beyond). Many NBA fans might instinctively cringe at the thought of NBA owners seeking to modify contracts which they have already negotiated and signed. However, it must be understood that all NBA standard player contracts are predicated on the existence of a Collective Bargaining Agreement (CBA).

The CBA is the mother of all contracts, the contract that makes all of the NBA’s rules allowable under anti-trust law. With no CBA, there could be no maximum contract, no NBA draft, no standard player contracts; teams would have to negotiate all terms of all contracts on a player-by-player basis.

The expiration of the current CBA on June 30, 2010 has the effect of nullifying all NBA standard player contracts that reach into the 2011-12 season and beyond (at least until a new CBA is formed, at which point those contracts will be subject to the new CBA).

During collective bargaining talks, NBA ownership will likely seek to reduce what it perceives to be waste. This is likely to include a reduction in long, guaranteed contracts, which have often paid massive amounts of money to players who are injured, over-the-hill, or otherwise unfit to contribute. There has been talk of shorter length maximum contracts and there has even been talk of scaling back already committed (and “guaranteed”) salary.

One approach by the NBA might be to push for the reduction of existing maximum salary deals to fall in line with new, lower salary maximums, as enunciated by a new CBA. Another and far more extreme stance could be for the NBA to insist on reducing all existing player contracts by a given percentage.

Such a proposal would be particularly unfair to certain types of players. For example, some players and their agents negotiated long-term contracts (contracts extending beyond the 2010-11 season) that they felt were for less than their present, fair market value in light of the expectation that, under a new CBA, salaries might be even further depressed. If these players’ contracts were scaled down further by a new CBA, they would be forced to play for a salary to which they never would have agreed, preferring instead to play with a different NBA team or to play abroad.

Also, scaling back all standard player contracts by a given percentage has different absolute dollar effects on players, depending upon their salaries. The lifestyle effects upon players whose annual salaries are reduced from $20 million to $18 million are substantially different than players who would be asked to accept scalebacks from $2.0 million to $1.8 million.

For the sake of discussion, assume an across-the-board salary reduction of 10 percent. The superstar player who makes $18 million rather than $20 million would still likely have chosen to play in the NBA versus any other league in the world because no foreign leagues currently offer annual salaries in the eight-figure range. However, the player making $1.8 million instead of $2 million quite possibly chose to play in the NBA at $1.8 million despite more financially lucrative, tax-free offers to play abroad. The $2.0 million might have been the very lowest salary that made the NBA more appealing to the player than his next best alternative.

From a contract law standpoint, players might have a hard time extracting themselves from their NBA contracts because they would likely have been charged with knowing that their contracts are predicated upon an existing CBA and that the CBA was due to expire on June 30, 2010.

By signing an agreement that could be governed under a future CBA, which would likely differ materially from the CBA in place when the player signed his standard player contract, the player willingly assumed the risk that the terms of his contract might be affected. While arguments could be made from the player’s standpoint about sophistication of parties (an argument whose validity might depend on whether or not the player was represented by an agent [or the quality of the player’s agent, for that matter]), such arguments will likely prove unnecessary.

The NBPA, the union charged with ensuring that all NBA players are properly represented in collective bargaining discussions, must be the failsafe here. In addition to obviously opposing scalebacks in general, the NBPA should take the stance that any salary reduction to any player’s existing contracts must be accompanied by a player option to void the contract and to become a free agent.

While the NBPA may have to cave on preserving 100 percent of the guaranteed money its players have garnered in existing contracts, it has the ability (rather, the duty) to hold back the players’ promise to play for anything less than that “guaranteed” money.

Agreeing to scaled back player contracts without affording its players the option to void such contracts would constitute certain failure on the part of the NBPA.