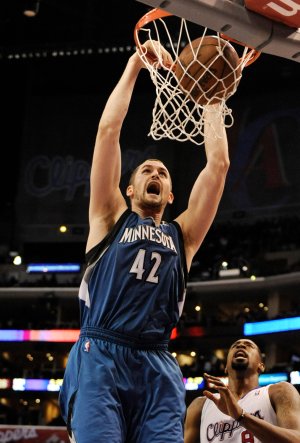 The points, rebounds, and double-doubles are impressive enough but Kevin Love’s attitude has as much to do with making him a first-time NBA all-star as anything else.

Love is becoming one of the elite NBA players and even though he’s competing for a Minnesota Timberwolves team that gets little attention and is losing roughly three times as many games as it has won.

After a recent 111-100 loss in Philadelphia where Love had 21 points and 23 rebounds to increase his consecutive double-double streak to 49, he didn’t throw his teammates under the bus. Quite the opposite, Love was offering encouragement about a roster that has eight players who have three or fewer years of NBA experience.

In fact the 22-year-old Love, who is in his third NBA season, appears liked a grizzled veteran on this youthful team.

After another disappointing loss, No. 48 of the season, Love talked only in positives about his team.

“All these guys are eager to learn and they see light at the end of the tunnel,” he said.

And if that light ever shines, it will be pointing first and foremost on Love.

The fact that he’s averaging nearly 21 points and more than 15 rebounds, shows the type of ability he has. In many circles Love is portrayed as an overachieving hard-working athlete.

All that is true, but his athletic ability is often underrated. No, he’s not going to jump over anybody to get a rebound, but he’s skilled enough to score in a variety of ways. He is shooting in the 42 percent range from three-point range, and he can be an inside force. His hand-eye coordination is off the charts.

Yet what is most impressive is that he has a non-stop motor, which is why he leads the NBA in rebounding.

“Sometimes you get lucky and some rebounds fall in your lap but the vast majority of times you have to really scratch and claw to get those rebounds and he does it on a nightly basis,” Minnesota coach Kurt Rambis said.

Love has an intuitive sense of where to position himself to get rebounds.

“He has incredibly strong hands,” 76ers coach Doug Collins said. “He carves out a spot in the lane and when he gets that spot, he is so strong that it’s hard to move him.”

Listed as 6-foot-10 and 260 pounds, Love has significantly increased his statistics and one reason is that he is playing about eight minutes more a game this season. Yet even last year, he averaged a double-double (14 points, 11 rebounds) in just under 29 minutes.

What helped take his game up to another level according to Love was his participation this summer on USA Basketball’s gold medal team in the FIBA World Championships.

“It definitely made a big difference,” Love said. “If you look at the players around the league almost all of them are having career seasons or a great season.”

All of these players are or before being injured, were playing at a high level.

“Playing at the international level, having all the games on TV, playing in front of so many people in hostile environments, really did help me,” Love said.

What is interesting is that even though he is on one of the league’s worst teams, Love isn’t achieving his offensive numbers by playing outside of the system. He is attempting about 14 shots per game, evidence that Love gunning his way toward a high scoring average.

Many of his points come off rebounds.

With Love and Moses Malone now being connected by their double-double experiences, Rambis, who played against Malone, was asked to compare the two players. Malone had a career-best 51 double-doubles, an impressive total, but still light years away from Wilt Chamberlain. According to the Elias Sports Bureau, Chamberlain holds the mark of 227 consecutive double-doubles.

As for Malone, both he and Love have an old-school mentality. Malone,  however, was a pure center, while Love is a power forward, who also happens to have great range on his jumper.

“Moses was a lot bigger, but I think so much of it has to do with, there is some technique that goes along with rebounding, understanding where the ball is going to bounce,” Rambis said. “So much is desire, pursuit, energy, hard work and both had those characteristics.”

There have been recent reports that the Timberwolves could soon be offering a contract extension to Love. Those reports were news to Love.

There certainly will be. Minnesota has young talent that must be developed, but Love is certainly has to be the focal point if the Wolves are going to field a competitive franchise.

For now, he hopes to build off his first All-Star appearance.

“The all-star experience was great,” Love said. “I am definitely thirsty to get back there.”

The way he’s going that thirst should be quenched many times over the next decade.