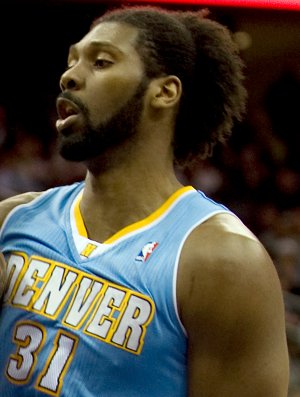 Remember when the Denver Nuggets were good?

Remember when they made the Western Conference finals in 2009 and tossed a serious scare into the eventual champion Lakers before falling 4-2?

The next year, after looking as if they might again challenge the Lakers, coach George Karl was lost for the season’s final 1 ½ months due to a form of throat cancer. Assistant Adrian Dantley took over and the Nuggets fell apart in the playoffs and were upset by Utah.

Then this season the Carmelo Anthony drama hit. The star forward finally got his wish and was dealt February 22 to New York. So there went the Nuggets as they had been known, right?

Wait a minute here. The Nuggets (39-27) still are good. Perhaps even better than before.

Since the trade, Denver is 7-2. Throw in a February 16 win at Milwaukee in what turned out to be Melo’s final bow, and the only NBA teams hotter over the past 10 games are the Lakers and Chicago at 9-1.

“A lot of people said we were going to be the Cavaliers of the West and stuff like that,’’ Denver forward Al Harrington said of some projections about life without Anthony being similar to what Cleveland has gone through since LeBron James bolted to Miami. “We got a lot of guys with a lot of pride and we got some good players (in the trade). So we’re just going out with a chip on our shoulder for sure. The New York guys (acquired in the trade) are definitely pissed off that they were moved and stuff like that. We’re just going to make the best of the situation.’’

In the three-team deal, which also included Minnesota and in which the Nuggets also sent point guard Chauncey Billups and three benchwarmers to the Knicks, they got forwards Wilson Chandler and Danilo Gallinari, guard Raymond Felton, center Timofey Mozgov and a future first-round pick from New York and center Kosta Koufos from the Timberwolves.

It was a bevy of assets that few initially expected the Nuggets would collect from New York. After all, Anthony could have opted out of his contract to join the Knicks as a free agent this summer, although he might have ended up losing tens of millions of dollars under a new collective bargaining agreement.

“We’re a better team (than New York), I feel like. That’s it,’’ said Felton, not elaborating.

Harrington, who played last season for the Knicks, agreed.

“If we had to play them in one game, I think we would win,’’ Harrington said.

If the Nuggets and Knicks ever meet in the playoffs, that would be very good news in Denver since it would mean a first-ever Nuggets appearance in the NBA Finals. For now, though, Denver is worrying a lot more about teams in the West.

The Nuggets’ surge has pushed them to the West’s No. 5 seed, where they would be quite pleased to end up. That likely would mean avoiding heavyweights San Antonio, Dallas and the Lakers in the first round and a likely matchup with Oklahoma City, which is still young and has lost seven straight games in Denver by an average margin of defeat of 19.3 points.

“I think we’ve got a good enough team to surprise some people,’’ Felton said of the postseason.

A primary reason why Felton could be right is they no longer are the enver Nuggets (that’s right, no D). Since the trade, Denver has given up 95.3 points per game as opposed to 105.2 per night in the first 57 games.

There are several theories regarding this. With the depth Karl now has, it’s not an idle threat when he vows to bench players for not buying into his defensive desires.

The Nuggets have gotten bigger and younger. And by giving up a pair of top offensive players in Anthony, who was averaging 25.2 points, and Billups, who was putting up 16.5 a night, Denver had to turn it up defensively to survive.

But the Nuggets are careful these days not to call out Anthony, who was not the best defender west of the Mississippi, and Billups, who has lost a half step at 34. When Anthony shortly after the trade heard about Karl being critical of his defense, he tweeted, “WHEN THE GRASS IS CUT THE SNAKES WILL SHOW.’’

Karl is somewhat less brazen now when the lawn is mowed.

“When you put more than one or two, whatever you want to label, mediocre, average defenders, you weaken your defense,’’ Karl said of the Nuggets before the trade. “It’s not only individual defense, it’s team defense. And so when there’s more than one hole, it’s difficult to figure out conceptually how we cover.’’

Is Karl touching upon defensive shortcomings of Anthony and Billups?

“There are some other guys on that list,’’ said Karl, who didn’t give names but said he also was referring to some players still on the team, ones who apparently now have shown more interest in defense.

Karl says now he should have been more demanding with Anthony defensively when he arrived in Denver in January 2005 and the star was in his second season. The Nuggets’ defense was a disaster when Anthony and Allen Iverson were the high-scoring stars between December 2006 and November 2008, although it did improve after Iverson’s departure.

“I think you got to blame me some,’’ Karl said. “When I got here, we kind of exploded as an offensive team and we never could get the defensive demand in the game. And as a coach you always try to manage your strengths and camouflage your weaknesses. As a coach, I might not have been demanding enough defensively.’’

Karl is now. After teams shot 48.0 percent from the field against Denver before the trade, foes have clanked away at 44.6 percent the past nine games. It’s also helped defensively that big men Kenyon Martin and Chris Andersen finally are fully healthy after missing time at the start of the season following summer knee surgeries.

“That’s what coach is pretty much preaching is defense,’’ said Ty Lawson, who has replaced Billups as the starting point guard, with Felton also playing plenty.

He’s also preaching that the Nuggets share the ball more. They’re doing that to the tune of 25.4 assists the past nine games as opposed to an average of 21.2 before the trade.

“Everybody is playing together,’’ said guard JR Smith. “We got eight guys in double figures (in Saturday’s 131-101 win over Detroit). I think we can count on one hand how many times that happened before the trade.’’

Actually, it hadn’t happened at all this season for the Nuggets until Saturday. But you can see where Smith is coming from.

Despite not having a big-time scorer, the Nuggets have had success so far sharing the ball. Center Nenê is the leading scorer since the deal with a modest 16.0 average. But Smith, while agreeing with Dallas owner Mark Cuban‘s recent declaration that the Nuggets are a better team since the deal, isn’t ready to say they won’t end up missing Anthony, averaging 25.5 points in his first 11 Knicks games.

“We gave him a lot of opportunities to excel because he was the best scorer on the court,’’ Smith said of Anthony. “But now, at any given night, anybody can be the best scorer on our team. I think that helps us. But it hinders us when we come to the playoffs and we’re going to need somebody to make that last second-shot.’’

Perhaps that late hero could end up being Gallinari, Anthony’s replacement at small forward for his first two Denver. In his second game, Gallinari scored 30 points Feb. 25 at Portland.

On that same night, Gallinari suffered a fractured left toe, which has kept him out the past six games and likely will keep him out for two more. But the Nuggets still have gone 5-1 without Gallinari, averaging 15.9 points overall on the season.

It’s no wonder Karl has an extra bounce in his step these days. It’s much different than earlier in the season when Anthony wanted out and the Knicks were not in a mood to send the Nuggets the assets they eventually did.

“I just think two months ago at this time, I was more worried about the worst that could happen,’’ Karl said. “In a lot of ways, I think what has happened is the best.’’

It’s looking pretty good now for Karl, who signed a contract extension last week for at least three years. The Nuggets then have three one-year options on Karl, which could keep him with the team until past his 66th birthday in May 2017.

“I think I’m energized,’’ Karl said of how he feels now. “But I think I’m more now at peace and positive about having a second chapter (with Denver). Coaches don’t usually get a second chapter. You get one chapter and usually are told to fade into the sunset and go someplace else.’’

Instead the sun is now shining on the Nuggets. That’s in stark contrast to what some projected would be the case after an Anthony trade.

“Were we supposed be like Cleveland? That’s what you all think?’’ Martin said. “We’re a basketball team. What are we supposed to do? Lose 20 games in a row.’’

Hardly. When the talk is about the Nuggets being good, it’s not reminiscing.