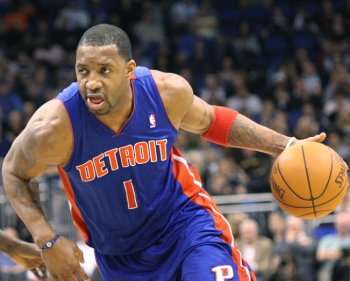 The words from Tracy McGrady’s former coach and general manager earlier this month were blunt. McGrady truly could have been one of the greatest players ever had he worked harder.

McGrady, 31, doesn’t exactly see it like that. The two-time scoring champion and seven-time All-Star, far removed from his marquee days following numerous injuries, doesn’t believe he would have attained even higher levels had he worked harder. But McGrady does admit there was an area he was lacking in during his heyday.

“I just wasn’t a great practice player,’’ McGrady, a Detroit guard, said in an interview with HoopsHype. “I just wasn’t. I wasn’t.’’

Speaking at the MIT Sloan Sports Analytics Conference in Boston two weeks ago, Jeff Van Gundy, who coached McGrady with Houston from 2004-07, and current Rockets general manager Daryl Morey, who traded McGrady in February 2010 to New York, both said McGrady’s tremendous ability led him to not always work hard. McGrady doesn’t deny his talent affected how he played in practice.

“That could be it,’’ McGrady said. “I just think I could cruise through practice and still be effective. Some guys have to really go (all) out to really have an impact on practice. My ability was just I had God-given talent to where I could just cruise through practice and still be an effective practice player… I was inconsistent. Some days, I have really good (practice) days where I just go hard and a lot of days where like, ‘Uh,’ and I just go through the motions. But I work hard. But I’m just not the best practice player.’’

McGrady’s contention is he worked hard individually, if not in practice, to become a star and someone who still could land in the Hall of Fame. But Van Gundy and Morey were critical of his overall work ethic.

“Tracy McGrady was 1,000 hours of practice,’’ Van Gundy, now an NBA analyst for ABC and ESPN, said sarcastically at the conference. “He should be a Hall of Fame player. His talent was other-worldly. He was given a great leg up in the race against other players. He’s as close as I’ve ever seen to someone with a perfect body and a good mind… I just wish I could have changed his practice habits and his mentality.’’’

Said Morey, “McGrady was the most gifted player I’ve ever had on the roster. I do think (his talent) got in the way of Tracy’s development. Much of the game was so, so easy… When it’s that easy to dominate at that young age (that McGrady did), because of your physical tools, his wing span was freakish, his size was enormous, his IQ. But my sense was that all of that did get in the way of Tracy reaching his highest heights.’’

That’s where the 6-foot-8, 210-pound McGrady, who entered the NBA with Toronto directly out of high school in 1997, disagreed with what Van Gundy and Morey said.

“I got by and I still was head and shoulders above what I played with, and I think that’s what they were saying,’’ McGrady said when asked about comments by the two. “Like, if I would have went the extra mile of practicing hard, who knows what I could have been? But that part I don’t really buy into. But I think the way I work out individually, to get ready, to prepare myself for the season (has been acceptable).

McGrady said he has no ill will toward Van Gundy, calling him “the best coach I ever played for’’ and saying he respects his bluntness. He said he reached out to Van Gundy after learning about his remarks.

When McGrady is talking about his tremendous talent hampering his practice habits, he’s primarily referring to before injuries really hit. McGrady had back, shoulder and knee problems with the Rockets. His days as a star all but ended after he had surgery on his left knee in May 2008 and then microfacture surgery on the same knee in February 2009.

McGrady averaged 15.6 points and 8.2 points during injury-riddled campaigns of 2008-09 and 2009-10, respectively. He said he’s feeling much better this season but is averaging just 8.6 points as a role player after signing a one-year minimum deal last summer with the Pistons.

“I find myself going harder than in my younger days because I have to now. So, yeah,’’ McGrady said of now being a better practice player.

Pistons coach John Kuester agrees. He said he’s “very impressed with his work habits’’ after letting McGrady know he had to make changes when he arrived in Detroit.

“He’s made some adjustments,’’ Kuester said. “We’re hopefully getting him to work a little harder in that area (of practice). I said, ‘You had to practice.’ And that’s basically what it boiled down to. We have to have him because of the dynamics of our team now… He’s got to make some adjustments. He’s got a lot of basketball still left in his life.’’ 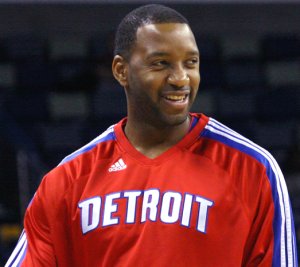 That might not be easy for McGrady, a 14-year veteran who turns 32 in May. He has a lot of wear and tear on his body, something he said came from all those years of having to carry the Magic and Rockets.

Significant treadwear isn’t uncommon for players who are now in their 30s after entering the NBA directly from high school. Just ask Denver forward Al Harrington, who also is 31 and arrived straight from high school in 1998.

“If you think about all the minutes (McGrady has) played, playoffs every year, (the) USA team (at the Olympic qualifying tournament in 2003), he has a lot of wear and tear on his body, just like I know I do,’’ said Harrington, McGrady’s teammate last season with New York after his trade from Houston. “Of course, it catches up to you. But he’s still in a situation where he can be productive.’’

McGrady has been a part-time starter for the Pistons, averaging 23.7 minutes. But McGrady vows he’s content, and said Detroit will be first on his list when he becomes a free agent after the season.

“I’ve had talks with Joe (Dumars) and he definitely wants to bring me back,’’ McGrady said of the Detroit executive. “And I’m excited about him having that willingness to bring me back. But that is something that I will evaluate. Maybe I’ll be here again.’’

Dumars confirmed he has interest in retaining McGrady.

“I’ve had conversations with Tracy about going forward beyond this season,’’ Dumars wrote in an e-mail. “We both agreed that we would sit down after the season and discuss his future in more detail.’’

The only problem is the Pistons (23-44) are nowhere near returning to championship form. When McGrady was asked whether he believes he eventually will make the Hall of Fame, he brought up Kevin Garnett and Ray Allen, perennial All-Stars who finally were able to become champions after both arrived in Boston in the summer of 2007.

“I look at what Ray and Kevin did later in their careers and got on a contending team,’’ McGrady said. “And it really wasn’t all about them individually but the whole team thing. And you see what they’ve done. Why can’t I do that? I think, if I’m in that situation, absolutely (McGrady will make the Hall of Fame). I’ve accomplished enough individually. But as far as the team aspect I think I have to get to another level.’’

Start with winning a playoff series. McGrady never has been on a team that advanced past the first round with the exception of the Rockets winning a first-round series in 2009 when he was out following knee surgery.

“I think about it, but I don’t lose sleep over it,’’ McGrady said when asked whether never having won a playoff series gnaws at him. “It is what it is. If you look at my numbers, what I put up in the playoffs, it’s not like I disappeared every playoff series. I did everything I could to try to advance to that next level. A lot of bad breaks, better teams.’’

McGrady has a career playoff scoring average of 28.5. That’s fifth in NBA history and ahead of every active player except Miami’s LeBron James.

Now, though, McGrady is resigned to the fact he’s likely to be a complementary player the rest of his career.

“If I never would have gotten injured, my role never would have changed,’’ said McGrady, who was acquired by Houston in 2004 from Orlando and began late in the 2005-06 to really be bogged down with injuries. “I still would be the prolific scorer that I was.’’

“It was tough sometimes,’’ Chandler said of McGrady going through that process. “But it happens. There’s a transition that comes from being one of the best players in the league, one of the best scorers. He got hurt. So he can’t help that… Not like the old Tracy, but I think he can hold up and play a good, productive five (more) years.’’

During his remaining years, McGrady at least vows to be a better practice player.