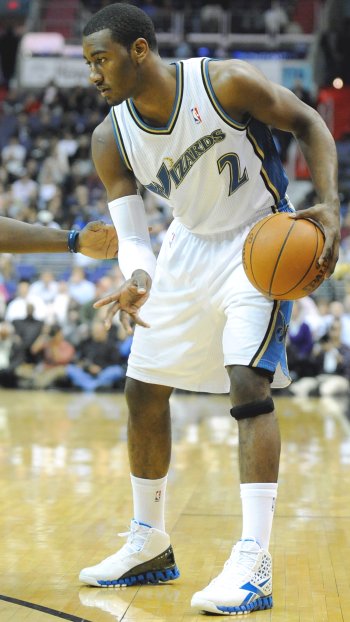 It happened with the guy who leads President Obama’s favorite team. Perhaps it will occur with the one who directs his neighborhood team.

Derrick Rose entered the NBA as the 2008 No. 1 pick but with an erratic jumper after playing just one year of college ball for John Calipari at Memphis. Since then, the Chicago point guard has improved his shot dramatically, becoming an All-Star last season and currently the leading candidate for MVP.

Now, John Wall, who plays down the street in Washington from the White House, would love to have a similar story to the one Rose is having for Obama’s beloved Bulls. Wall, the point guard who was the top pick in last June’s NBA draft after playing just one year for Calipari at Kentucky, is having a fine rookie campaign with the exception of a jumper that remains shaky.

“My goal is to get to his level and get better,’’ Wall said in an interview with HoopsHype about wanting to improve his game similar to the way Rose has. “It took time for him to progress. That’s something I’m trying to do.

Through hard work, Rose was been able to improve his mid-range game and his three-point shot. After clanging away at a meager 22.2 percent from beyond the arc as a rookie and making just 16 all season, Rose is a 32.9 percent marksman this season and on pace to drill more than 125.

Wall, shooting 29.0 percent on three-pointers after having missed eight straight, might not have as far to go with his shot. Regardless, he vows he’s going to come back next season with an improved jumper.

“I try to shoot a thousand a day,’’ Wall, averaging 16.3 points and 8.6 assists and shooting 40.5 percent overall, said of his offseason regiment. “But I want to do it more where I’m really jumping. (Last) summer, I wasn’t really jumping on my jump shot. Just shooting a set shot. You can’t do that in this league. Guys are fast and they’re closing out. So you’re going to see me work and I’m going to come back with an improved jumper next year.’’

When it comes to defenses playing off him, Wall says his desire is to “make them pay.’’

If he can improve his jumper, watch out NBA.

“Once he really develops a more consistent outside shot and gets more confidence in that, he’s going to be a terror in this league because of his speed, ballhandling, all the other intangibles, his athleticism,’’ said Wizards guard Maurice Evans.

Wall already has spooked teams. He had games last week of 26 points and eight assists against New Jersey and 32 points and 10 assists against the Los Angeles Clippers and Blake Griffin in a showcase involving the league’s top two rookies.

But how did Wall do in his other two games last week? He pretty much hit the wall, shooting a combined 5-of-22 against Portland and Denver while averaging 11.0 points.

Wall’s inconsistency was summed up in Monday’s 100-95 overtime win at Utah. He shot 10-of-11 and scored 24 points in the first half. In the second half and overtime, he went 0-of-9, not scoring again until hitting four free throws in the final minute of overtime to finish with 28 points.

It’s not surprising Wall has been uneven at times. He’s just 20, but already has been handed the leadership role on the rebuilding Wizards (18-55), who are 2-35 on the road and at least with the win over the Jazz assured they won’t break Sacramento’s 1990-91 mark of 1-40 for worst-ever NBA road record. 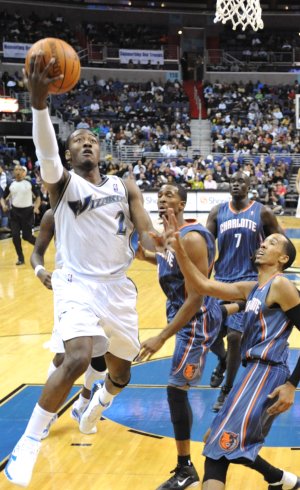 At start of the season, Wall had veteran point guards Gilbert Arenas and Kirk Hinrich to serve as mentors. But Arenas was shipped to Orlando in December and Hinrich was dealt to Atlanta in February.

“It wouldn’t have been bad to have (Arenas still) around to hear him say certain things and teach me about the basketball game and learn,’’ Wall said. “But things didn’t work out and they made the trade and now I’m learning on the fly. When they let (Arenas) go, I still had Kirk Hinrich around. That was really helping me.

“Now, I’m just really trying to learn on my own. It’s tough. It’s tough. It’s a learning process for me. But it was great to have those two guys around while they were here and give me the help they did. Gil was teaching me the ropes of how to do it offensively and taking my time and Kirk was helping me with my defense as much as possible.’’

Now, the Wizards are Wall’s team. That has become even more the case as injuries have knocked out forwards Josh Howard and Rashard Lewis, Washington’s two top veteran players, for significant periods.

Yes, the Wizards are a young outfit. Still, all of their other top 10 scorers are at least two years older than Wall.

“I’m vocal. I say certain stuff, but at 20 years old and most of these are guys are older than me by four years, you didn’t want to say too much and come in thinking you’re bigger and better than them,’’ Wall said of adjusting to the leadership role of an NBA team at such a young age. “But I feel like I got all their trust. They trust me as a point guard.’’

“They trust me as leading the team. Now I just got to step up and tell people where to be and get in people’s faces if they’re doing wrong. And if I’m doing it wrong, they get in my face without us arguing. Let it be team chemistry and holding each other accountable.’’

Just as Wall says he’ll come back next season with an improved outside shot, he also vows to “prepare (himself) to come in and be a better leader and a more vocal leader for the second year.’’

This season still has nine games left, and Wizards are trying to survive. Wall said the losing has been “tough’’ but he’s willing to be patient. He points to an NBA star who also endured plenty of defeats early in his career.

“You look at Oklahoma City when Kevin Durant first got there,’’ Wall said of Durant, who actually entered the NBA with Seattle in 2007-08 before the team moved to Oklahoma City the next season and overall went 43-121 in his first two seasons. “They didn’t do too good his first couple of years. So I’m just taking on to it, and things are going to get better.’’

They sure did in Chicago, where the Bulls went 41-41 in each of Rose’s first two seasons. Now, they’re on pace to finish 60-22 and have the best record in the East.

“He’s very similar to how Derrick came in and everybody laid off him,’’ Washington coach Flip Saunders said about expecting Wall to improve his outside shot the way Rose did. “They questioned his shot. What happened is as soon as Derrick developed that shot over the last year he went from being an All-Star to being MVP. And I think John when he develops that shot consistently, he’s going to be more of a multi-dimensional player, tough to defend. He’ll be better and the team will be better.’’

Whether Wall can make the Wizards good enough to get the President to pay more attention to them remains to be seen. One figures that at least would require a second Obama term. 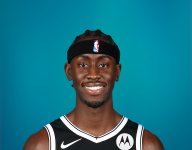