I will not rush it

I will not rush it 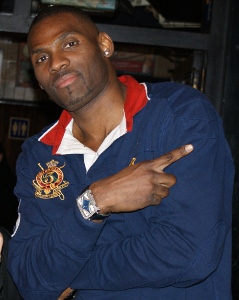 I have great news. I just got the results from the doctors and now it’s all good. Everything is going on well right now. It’s good to be back on the court a little bit, slowly, taking my time.

Trainers, doctors, we all agreed I should not play for the rest of the season. Right now, it’s only the beginning, I’m just taking my time, practicing once or twice a week… I really don’t have to be ready until August.

When I was told about this problem would make me stop playing for the rest of the year, I didn’t react all that bad. I knew something was wrong with me. When you know your body, you know when something’s wrong even if you’re not a doctor. So I was just happy and relieved that it was something that doctors could cure. The way I was feeling it was impossible to play basketball. It was impossible to run up and down the court without feeling like I had just run a marathon. I couldn’t breathe, I had to put my hands on my knees. I was having a lot of problems for a few weeks.

Yesterday I practiced and I felt no pain. But, as a measure of precaution, I’m not going to argue with the doctors and we will wait for next year. I understand looking at the long-term picture is a lot better than taking risks right now.

As of now, we don’t know if I will train with my teammates. We haven’t reached that point. Right now, I would say no, but anything is possible. I don’t have the urge to get back to training with my teammates or to play a game. I really understand the situation I’m in right now. What’s best for me is to be ready in August.

FINAL FOUR IN BARCELONA WILL BE TOUGH TO WATCH

We lost the series against Panathinaikos and won’t play the Final Four, which will take place in our city. I watched the last game and it’s easier to analyze it when you’re not playing. When you’re in the game, it’s a lot more difficult to understand exactly what kind of adjustments have to be made on the court.

When the Final Four is in your city, it makes everything a little bit more difficult. There’s more pressure, everybody expects you to be there and win it. That is not longer the case. This is not last year’s team. This is this year’s team. Not playing the Final Four is devastating for the organization, but that’s over now. Time to show who you are.

Anyway, I fully support my teammates whether they win or lose. I still believe in this team and this coach. I’ve got full confidence in these guys. Now we have to finish first in the regular season of the ACB League and win the title. That would make a good season. Not great, because a great season here is to win everything. We have the biggest budget among the Spanish clubs and this team is made to win championships.

Everybody said we were the favorites. But again, this is not the same team we had last year. People have to understand that. It’s still a very good team, but it’s not the same team. Gianluca Basile is out, I’m out, Juan Carlos Navarro is playing injured… Last year all of us were healthy and playing. We have to keep going and these guys will do that. I saw Ricky Rubio in the morning and spoke to him a little bit, but not too much about basketball. Just wanted to know how those guys were doing. We didn’t talk about basketball. More important to me is the person and I don’t like to see my guys so bad and play bad. I just don’t like it.

RODMAN IS A HALL OF FAMER, PERIOD.

He has the rings, five, he had the energy, the rebounding, all the dirty work… The people who really understand basketball appreciate what Dennis Rodman did. That’s why he’s a Hall Of Famer. His lifestyle off the court was obviously different and he still was able to come to work every game (even when he dressed like woman) and give you 15-20 rebounds and defense. He was unbelievable. People don’t understand he was not that tall. I’m from Illinois and I could see him winning with the Bulls.

Scottie Pippen is a Hall of Famer. And Rodman is too, for sure.