Well, Durant seems to believe many folks have forgotten about him this season.

“I guess I’m flying under the radar,’’ the Oklahoma City forward said in an interview with HoopsHype, as if it’s really possible for the 6-foot-9 star to avoid detection devices.

But it was Durant who brought up the belief his Q rating has slipped this season. It all started when he was asked about being on the verge of winning a second straight scoring crown.

“A lot of people forgot about me this year,’’ said Durant, averaging 27.8 points. “So I guess if I get the scoring title, I guess people will remember me. Last year, I kind of jumped on the scene. I’m the old guy. I’m not going out there and averaging 40 points a game and stuff like that. So people forgot about me. So, hopefully, the scoring title I guess will let people to know, ‘Hey, I’m here still.’’’

Durant, 22, actually hasn’t gone anywhere all season when it comes to being on top of the scoring heap. But his point in general is NBA headlines have been dominated by what guard Derrick Rose has done in Chicago and what’s been going on since forward LeBron James took his talents from Lake Erie to South Beach.

“I’m not on the scene as much as I was last season, I guess,’’ said Durant, a four-year veteran whose scoring average has fallen from 30.1 last season and his rebounding average from 7.6 to 6.9.

Durant last season was second in the MVP voting behind James, before he bolted from Cleveland to Miami. Durant’s Thunder had improved its record from 23-59 to 50-32 to surprisingly make the playoffs and threw a serious first-round scare into the eventual champion Lakers before falling 4-2.

It wasn’t surprising, especially after he led Team USA to a gold medal with a dominating performance at the World Championship, that Durant was on the cover of Sports Illustrated’s NBA preview edition and was an overwhelming pick in a preseason poll of general managers to be this season’s MVP. He received 67 percent of the vote while King James got a very commoner-like 4 percent.

Durant’s name, though, hasn’t come up very much lately in MVP talk. He might not even crack the top five. Rose, James, Lakers guard Kobe Bryant and Orlando center Dwight Howard figure to finish ahead of him, and perhaps Dallas forward Dirk Nowitzki also will.

But Durant insists not being regarded as a strong MVP candidate isn’t bothering him. In fact, he said Rose, whose Bulls are 57-20 after going 41-41 last season, should be handed the Maurice Podoloff Trophy.

“No (dissatisfaction). I’m playing on a winning basketball team,’’ Durant said of the Thunder (52-26), which clinched the Northwest Division on Wednesday. “I won 50 games. I’m in a tough conference, a tough division. I think the MVP goes to a guy that there team is like us last year when we went from 23 wins to 50 (even if Durant finished behind James, whose Cavaliers actually fell from 66 to 61 wins). That’s a big difference. With guys like D. Rose, they went from 41 to like 50-something right now. So it’s a big difference. We stayed the same.

“So, if you stay the same, that’s probably why Kobe Bryant only won one award (for MVP, in 2008). Hopefully, I’ll get one before I’m done playing, though. As of right now, I congratulate Derrick Rose for winning MVP… Yeah, of course (Rose should be the MVP). He’s having a phenomenal season. They’re No. 1 in the East now, especially with all the firepower that went to the East… (Rose), Kobe Bryant and LeBron James, those three guys should be MVP candidates.’’

The humble Durant doesn’t seem to mind there’s supposedly been an outbreak of amnesia even if he believes another scoring title might remind some he’s still putting up big numbers in the 73102 zip code. Maybe all this forgotten talk he will use as motivation during the playoffs.

“Hey, keep forgetting about him then,’’ said Thunder coach Scott Brooks if that’s the case.

Oklahoma City is currently the No. 4 seed in the Western Conference, which puts the Thunder in line for a first-round meeting with likely No. 5 Denver. Nuggets guard Ty Lawson said he sees where Durant is coming from about hovering under the radar.

“I can agree with him,’’ Lawson said. “All they’ve been talking about is the Heat, Bulls, Celtics or the Spurs. They haven’t really talked about him. He’s leading the league in scoring. I think he’s not forgotten about, you know, as a player. But in all the races, the MVP races and stuff like that, probably so.

“Probably because the (small) market (where the Thunder plays). Maybe that or he’s not the outspoken type of person. Derrick Rose said, ‘I’m going to be the MVP.’ The Miami Heat have brought their attention to themselves. He really doesn’t bring attention to himself. He’s a humble player. That’s probably one of the reasons why he isn’t getting the attention he should be getting.’’

Spurs forward Tim Duncan did manage to win MVPs in 2002 and 2003 despite having even less desire for attention than Durant. Of course, that the Spurs then had seasons of 58 and 60 wins sure didn’t hurt.

Rose’s Bulls and James’ Heat will have win totals in that neighborhood, which certainly helps their causes. James is vying to win his third straight MVP after his stats haven’t fallen that much despite being paired with fellow stars Dwyane Wade and Chris Bosh.

“You really thought LeBron wasn’t going to make that big of an impact, him playing with Wade,’’ said Durant, admitting surprise about James, who is second in the league in scoring with a 26.7 average after his seven-year Cavaliers career figure was 27.5. “He’s playing phenomenal, just like he’s been playing in Cleveland. And D. Rose has jumped up on the scene with his team.

“People like the new story, I guess. And I guess, of course, I can play a little better. I want to play better. But it is what it is. Hopefully, I just continue to keep being competitive every year and hopefully I’m in the (MVP) conversation.’’ 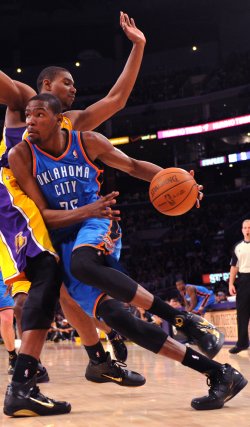 Durant figures to be in the mix for many years to come. While he said he hopes one day to win an MVP, he’s willing to be patient.

Westbrook, who played with Rose and Durant on Team USA last summer, isn’t joining Durant in endorsing Rose for the trophy. He wants it shipped to that 73102 zip code.

“I have to go with my teammate, Kevin,’’ Westbrook said. “I think Kevin, just like (Durant) said, a lot of people forgot what he’s been doing all season long, and I think we have one of the best records in the league as well. He’s competed every night.’’

After all, that might lead to some folks remembering him.