DeMar DeRozan: "Sometimes you have to go through this to be successful"

DeMar DeRozan: "Sometimes you have to go through this to be successful" 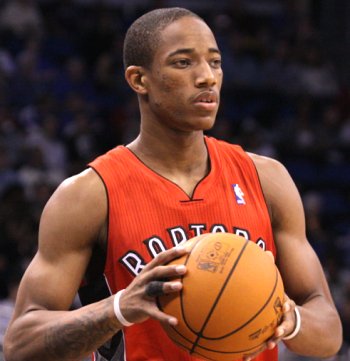 Toronto Raptors shooting guard DeMar DeRozan has enjoyed a successful individual season while his young team has struggled for wins on the court.

DeRozan was averaging more than 17 points per game heading into the season’s final week after averaging 8.6 as a rookie.

Known mainly for his outstanding leaping ability, DeRozan has become a perimeter threat as well for the Raptors. His minutes are up this season, which accounts some for his scoring increase, but he has become a much more integral part of the offense and among many young players who Toronto hopes can help the franchise back to respectability. The No. 9 overall pick of the 2009 NBA draft out of USC, DeRozan won’t turn 22 until August.

He recently talked about his sophomore NBA season before a game against the Philadelphia 76ers.

You have enjoyed a breakthrough year, averaging more than 17 points per game. How would you rate your progress?

DeMar DeRozan: I have been trying to get better to be the best player I could possibly be. I worked extremely hard this summer and I was just ready for whatever came my way this season and I just prepared myself the best way I could.

What do you think was the biggest reason for your improvement?

Your medium range game has improved. Did you put a lot of work into that?

DD: Yes. I always worked on that and tried to perfect that and get it down pat because that is the money spots, to be able to knock down mid-range and be able to stick it.

You participated in a wild slam dunk contest this year. How was the experience?

DD: It was definitely fun and exciting especially being back home in L.A. and I had a great time participating in it again and I couldn’t ask for anything more.

In a normal year you may have won the slam dunk contest, but it’s tough beating people who jump over cars and dunk. Talk about the competition from Blake Griffin and others.

It’s been a difficult season for the Raptors. How tough has it been dealing with the losing?

DD: It’s definitely tough, but you have to stay strong. Sometimes you have to go through this to be successful. You have to come back and be strong next year.

This is a young Raptors team. What do you think of the team’s future?

DD: We have a lot of lot of players who will continue to get better and we can’t do nothing but continue to grow especially with us being so young and understanding what it feels like to lose and now we just want to better ourselves so we can start winning.

You had only attempted 46 three-pointers in the first 78 games. Is that the next part of your game that you want to expand?

DD: Oh yes, definitely. It will come through time. I really don’t stress about it. Because once it comes, that is another part of my game that will develop. Will work on that this summer a lot and come back ready next year.

Your scoring average has nearly doubled. Have you surprised yourself with how you have played this season?

DD: It is always something I knew I could do, score. Especially my first year just learning the game and understanding it, just going out and scoring the ball, once I started playing more I felt scoring would come.

What about the NBA surprised you the most?

DD: I don’t think anybody really understands how tough it is to play 82 games. It’s different from saying it than actually playing it. It is definitely tough but that is what makes a man in this league. (Note: DeRozan has played in every game this season after appearing in 77 last year).

What are your offseason plans?

DD: The same as always. Take little rest, to rest my body and then starting in the gym, working on little things, this summer get deeper range, increase my workouts.

Does all the talk of a potential lockout on your mind?

DD: It is, but I am not going to change my schedule because there may or may not be a lockout. I will do my same routine as if there won’t be a lockout and go from there.

The Eastern Conference has really improved. What are your thoughts about that?

With all the losing, what has motivated you to continue playing at a high level?

DD: It’s my job at the end of day and I love doing it. I wouldn’t ask to be doing anything else other than playing this game. I want to play this game all the time like it means something.