Isaiah Thomas: "Put me out against anybody and I'll show you I'm not too small"

Isaiah Thomas: "Put me out against anybody and I'll show you I'm not too small" 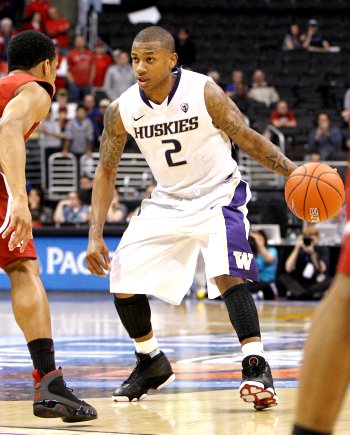 Former Huskies guard Isaiah Thomas is entering the draft with questions about how his lack of height could hurt him in the NBA. At 5-foot-9, the ultra-quick Thomas thinks his size can actually help his career in the league.

Have you taken any time off since the college season ended?

Isaiah Thomas: I took a week off after we lost in the second round. Ever since, I’ve been working out – two-a-days.

What aspect of your game are you most focused on improving in the weeks leading up to the draft?

IT: The NBA range three-pointer and my mid-range. Also the floaters. Those are the three main things I’m working on.

Have you hired an agent already?

IT: No, I haven’t signed with an agent yet. I’m not going to do that any time soon. But I’m going to stay in the draft.

IT: Yes, no matter what. Cause once these workouts begin they are going to notice something different.

Was there anyone in your circle that advised you against entering the draft?

IT: Not really. Once I talked with them about how I felt… I have a lot of my people in my circle and a lot of people behind me. They told me the good and bad, the best and worst situations… I know once these workouts start in gyms, they are going to see things they didn’t see me doing in college.

Why there is so much togetherness in the Seattle basketball community? Jason Terry and other players from the area have given you some guidance about the draft, for example.

IT: That’s just how we are. People that have made it, they always want to get back. They always want to see somebody else make it. That’s just how people in the Seattle area are. Guys that have made it want to get back to the young guys. And they expect that out of the younger guys too. So when you make it, you have to get back to the guys under you. It’s like a big family. Everybody communicates with each other no matter who it is. Brandon Roy, Jason Terry, Jamal Crawford… They all communicate and we have a close relationship.

Which of those players has helped you the most?

IT: Jason Terry and Jamal Crawford. They’re the biggest help I’ve got. Without them, I wouldn’t be in the position I am right now. They are behind me in my decision. I’m in Dallas right now and we’re working with Jason Terry, who’s in the playoffs and is helping me a lot. So yeah, Jamal Crawford and Jason Terry. And next week I’ll be working out with Gary Payton down in Las Vegas. He’s going to have a big influence in my preparation for the draft too.

What do you think you can learn from Payton?

IT: Just defensive-wise, I think I can learn a lot because he was one of the best guard defenders of all time. I think I can learn so much because he’s of the best point guards of all time, period. When you’re with guys like that, you can only learn. I’m going to listen and do whatever he says because I know he made it and had a great career. I want to have a great career like him.

What’s the first thing that goes through your mind when people say you’re too small to succeed it in the NBA?

IT: Put me out against anybody and I’ll show you I’m not too small. It’s been all my life with people saying I was too small and I have overcome that to this point. In the NBA today, you don’t see guys posting up point guards like Gary Payton used to do back in the day. It’s a wide-open game. So I can really use my height to my advantage.

Being from Seattle, would it be strange for you to get drafted by Oklahoma City?

You tweeted you would be back after losing that game vs. North Carolina. What happened between that tweet and the moment in which you made the decision to enter the draft?

IT: I really took that week and a half to really think about my decision. I mean, I love college and I love the University of Washington. Those were the best three years of my life, but I gotta do what’s best for me. I talked to my family and I talked to my mentors Jamal Crawford and Jason Terry. Then I looked at the pros and cons and I felt like I was ready to make this next move. I want to do it.

There’s a little cockiness in some tweets, some people say. Is that the real Isaiah Thomas or you do that just for fun?

IT: You said cockiness?

IT: I’m confident, I’m not cocky. People portray things in different ways and that’s their opinion, but I’m the most humble dude you’ll meet.

If there’s no NBA season next year, what would you do?

IT: As of right now, I really don’t know. Work out with NBA players around the country or take my game overseas until the lockout is over.

So you wouldn’t be opposed to playing abroad.