JaJuan Johnson: "I feel ready for this"

JaJuan Johnson: "I feel ready for this" 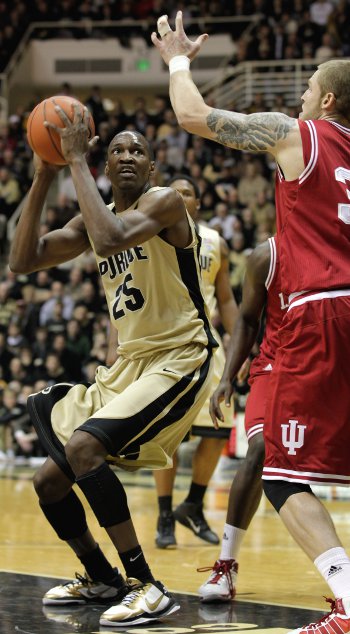 Purdue forward JaJuan Johnson opted to return to school for his senior season hoping to improve his draft stock. The move has not paid off for many players, but that will probably not be the case for Johnson, who had a terrific final year with the Boilermakers that earned him All-American honors.

Where are you working out right now?

JaJuan Johnson: I’m working out with Tim Grover in Chicago.

And who are you working out with there?

Kanter is probably the most likely to go in the lottery. How is he looking?

JJ: He’s real good. He’s got size, he’s athletic, he can shoot… I’m really looking forward to working out with him and get better.

You had the chance to enter the draft last year and you decided to return to school. What was the main reason?

JJ: I think the biggest reason was that they were saying I was going late first-round to second, so it made sense to get an extra year at school, get a degree and help my draft stock, which I think I did.

How much do you think it has helped your draft stock?

JJ: I think I have really helped my stock because I can do a lot more things on the court this year. I can put on the ball on floor more, I’ve added to my range, things like that… I feel like the scouts will now have the chance to see the new things I can do.

How was the experience of practicing with the players of the U.S. team last summer?

JJ: It was great. It is something that I will always remember. I think my first three years in college really helped me from a experience standpoint to play against guys like Kevin Durant or Derrick Rose there. It was a great experience.

Ever after the season you’ve had, you are not getting as much attention as other players in the draft. How do you feel about that?

JJ: Oh, at the end of the day I still got named to the All-America 1st Team, I was named Big Ten Player of the Year, Big Ten Defensive Player of the Year… I got enough attention and I think just with the workouts I will get even more.

Are you a big city type of guy or would you rather play in a smaller city?

JJ: I would be OK with any team that drafts me. I can play anywhere. The big cities don’t bother me, I can play in smaller cities… The place doesn’t matter. I will be happy wherever I go.

When do you plan on having the first workout with an NBA team?

JJ: I would say around pre-draft camp in Chicago.

Do you know if you’re going to be in that big workout that’s going to take place in New Jersey a couple of weeks from now? Aren’t you going to be there?

Some guys looks better in workouts than on five-on-five situations. What kind of player do you think you are?

JJ: I think I’m a pretty good shooter, so probably in these workouts I can showcase what I can do. But I also think I’m a good game player that can see his options pretty well.

Are you going to be a small forward or a power forward in the NBA?

JJ: I would say I’m probably going to start off as a power forward. But as I add to my perimeter skills more, I will move and play the three.

The next few weeks are going to be key for your career. What’s the prevalent feeling going into this process?

JJ: I’m excited. I feel ready for this more than ever before. I’m looking forward to working out for these teams and get better.