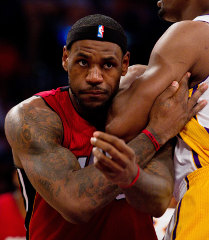 They are known so much for their offensive glitz, with their trio of All-Atars, but a major reason the Miami Heat will face the Boston Celtics in the Eastern Conference semifinals is an underrated defense.

Miami advanced by defeating the Philadelphia 76ers 4 games to 1 and for those who didn’t follow this closely, it was a series in which the Heat were extended to the limit by a resilient 76ers team.

Three of Miami’s four wins weren’t decided until late in the fourth quarter. The only blowout was a 94-73 win in Game 2 in which the Heat led by as many as 28 points.

Other than that, Heat coach Erik Spoelstra admittedly said that his team had trouble matching the speed and energy of the Sixers throughout the series.

And even though LeBron James, Dwyane Wade and Chris Bosh collectively averaged more than 70 points per game during the regular season, it was the defense, especially by Wade and James, that continually bailed out the Heat in their opening Eastern Conference series.

In the postseason, the three continued their scoring duties, averaging more than 66 points per game, but Spoelstra was able to use Wade and James as effective defensive weapons.

For instance James often started the game guarding Andre Iguodala, who was limited to 19 points in the first three games.

Also in the series, James would at times even defend against guard Lou Williams, whose three-pointer over Wade gave the Sixers the lead for good at 84-82 during their lone win, an 86-82 triumph in Game 4.

As for Wade, he was also a stopper for much of the series. Spoelstra moved Wade to guard Jrue Holiday at the beginning of Miami’s clinching 97-91 win in Game 5. Holiday had been highly effective the first four games for the Sixers, but was limited to 10 points (3 for 9 shooting) in the finale.

What is amazing is the way James and Wade can expend so much energy on both ends of the court.

Young did have 18 points the next game, but 10 were in the final quarter when the outcome was all but decided in that Heat rout. During the final three games, Young would score a total of 19 points, although he played well in Game 5 with 13.

Anthony scored just 17 points in the entire series, yet he was a huge defensive presence.

And what is interesting is that this type of defense was needed because Miami was often deficient in offense. For most of the series, the Sixers did a good job of limiting Miami’s points in the paint and the Heat often weren’t able to capitalize from the perimeter. During the first four games Miami shot 16 for 67 from three-point range (.239).

In the clincher, Miami finally made the Sixers pay by drilling 12 three’s, although the Heat hoisted 30 attempts.

The Heat needed Mario Chalmers to go 6 for 12 from three-point range in the clincher, after he had hit just four treys the first four games.

One gets the impression that Miami doesn’t always want to take its chances with Chalmers winning games for the Heat on offense.

During the series, Miami was often forced to play a half-court game, which typically occurs in the postseason. And in the half-court sets, the Heat would dribble too much, run the shot clock down and often force a shot.

If the Sixers were able to neutralize the Heat offense for long periods, what is Boston, a team that led the NBA in scoring defense (allowing 91.1 points per game) going to do?

The Celtics likely won’t allow Miami to get into its transition game so operating in a half-court offense will be the key for the Heat.

Defensively, the Heat face a bigger challenge in Boston. While the Sixers speed gave Miami trouble, the Celtics, led by Ray Allen, are likely to perform better from the perimeter against the Heat.

The Sixers missed a number of wide open shots and only Elton Brand (.548) shot more than 45 percent from the field.

“I think biggest thing is they are better defensively than you would think,” Iguodala said of the Heat. “They do a great job communicating.”

Spoelstra feels that Boston will present plenty of problems, but that the Celtics can’t have more speed than the Sixers.

“Philadelphia plays at such an extreme pace and has speed and quickness you won’t see on a night to night basis and it’s tough to prepare for,” Spoelstra said. “What I liked is that we were pushed this series and had to find ways to win and showed some resolve.”

That is all true, but few, at least outside both locker rooms, expected this to be so competitive. If the Heat needed to show resolve in the first round, what happens now?

The fact that Miami played so well defensively, allowing the Sixers to average just 86.6 points in the five games, is a continuation of the regular season, where the Heat were highly proficient on D. Miami was sixth in opponent scoring, allowing 94.6 points per game.

Against Boston, it will be important for Wade and James to hit some three-pointers because defenses will back off and allow those shots. Against the Sixers, the two were a combined 6 for 26 from beyond the arc.

As the Heat meet the well-rested Celtics, Miami’s defense seems to be a given. It’s the offense that must come through against the league’s best scoring defense if the Heat have designs of advancing past the second round.