Memphis not surprised about postseason success

Memphis not surprised about postseason success 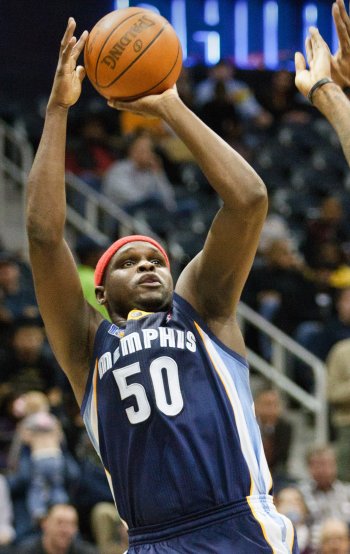 And that’s not just your run-of the-mill gold on the uniform. It’s called Grizzlies Gold, noted by the team to be modeled after the colors of Egyptian royalty.

Not that too many people even knew before the Grizzlies wore any kind of blue and gold. But they’re learning.

“To be honest, that was probably the first time in 10 years many people even had seen us play,’’ forward Shane Battier said of Memphis’ 114-101 win Sunday at Oklahoma City in Game 1 of a Western Conference semifinal. “That was our first network game (with the telecast on ABC). I bet you most people couldn’t even name our starting five or even our color scheme.’’

As for the starting five, that’s center Marc Gasol, forwards Zach Randolph and Sam Young and guards Mike Conley and Tony Allen. But one thing at a time. Fans are still learning the colors.

For 16 years, the Grizzlies mostly have existed in anonymity. They had six brutal seasons in Vancouver before moving to Memphis in 2001.

Memphis, the West’s No. 8 seed after going 46-36 in the regular season, finally did win a playoff game last month, beating San Antonio in Game 1. Some might have thought that alone would have made for a successful season.

But not these Grizzlies. They stunned the top-seeded Spurs 4-2 in the first round. And their dominance of the Thunder on Sunday has put them in realistic position to become the first No. 8 seed to win consecutive playoff series, excluding the 1998-99 lockout season, when New York made the NBA Finals.

“Many people are surprised by it, but it ain’t no surprise to us,’’ Randolph said of what the Grizzlies are doing. “People weren’t expecting us to be here, so that’s a shock. But we’re here. Man, we’re here to play basketball and play hard.’’

Randolph sure is doing that. He’s averaging 23.3 points and 9.3 rebounds in the postseason, including scoring a career playoff-high 34 points and grabbing 10 rebounds Sunday. After that showing, Thunder star Kevin Durant called Randolph “the best power forward in the league.’’

The Grizzlies also have a pretty good center in Gasol, who had 20 points and 13 rebounds in the Game 1 blowout. And you thought Lakers forward Pau Gasol, his brother, was the only member of the family who would be seen playing in May.

If you also thought Pau might be checking in to give his brother some advice, you’d be wrong. This Grizzlies outfit is potent, and it would seem the last thing Pau wants to do is provide something that could be used against the Lakers in the Western Conference finals.

The center is doing quite well, thank you. He’s averaging 15.0 points and 12.4 rebounds in the postseason and seeing his price go up steadily for when he becomes a restricted free agent this summer. 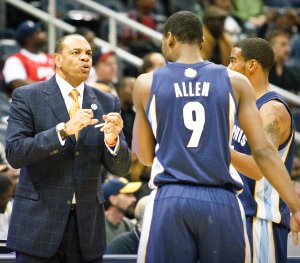 Plenty of Grizzlies are doing well. Memphis is outscoring foes by 4.6 points per game in the postseason, continuing to show this run is hardly a fluke.

“We feel good about who we are,’’ said Grizzlies coach Lionel Hollins. “We aren’t looking at it like we’re beating the No. 1 seed (in the first round). We were just trying to win a playoff series, and that’s what we did. And we’re trying to win another playoff series.’’

Hollins, who has had three tours of duty coaching the team, knows plenty about the bad old days of Grizzlies. He coached them to an 18-42 mark in a 1999-2000 interim Vancouver stint and began his current tenure by closing 13-26 two years ago a season in which Memphis went 24-58 (Hollins also was 0-4 in an interim stint during the playoff season of 2004-05).

Battier is a Grizzlies’ survivor on the court. He was a rookie in 2002-03 when they went 23-59 and then endured a 28-54 campaign. Battier was on the Memphis teams that went 0-12 in playoffs before being traded to Houston and returning to town last February.

“The city is besides themselves,’’ Battier said of the atmosphere in Memphis, especially since the Grizzlies closed out the Spurs with a 99-91 home win last Friday. “When you have this (dry spell) we’ve had, you just never really expect success. It gets in your head a little bit. When you beat the Spurs as an eighth seed, people are like, ‘What are we supposed to do? We’re so excited but we don’t know how to react.’ It’s great to see the city come together and really get behind this team. It’s an electric atmosphere.’’

It really should be Saturday. Memphis, after playing Game 2 at Oklahoma City on Tuesday, will play host then to its first second-round game.

The Grizzlies might wear Memphis Midnight Blue. But the sun has far from set on their season.