Marko Jaric: "It seems I was always part of a rebuilding situation"

Marko Jaric: "It seems I was always part of a rebuilding situation" 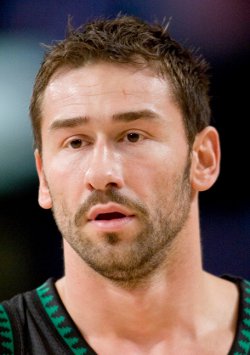 Marko Jaric‘s most glorious days were in Italy a decade ago playing for Virtus Bologna and coupled in a fantastic backcourt with Manu Ginobili. The Serbian returned to Italy this season to join Montepaschi Siena, a team that made the Final Four of the Euroleague thanks in part to the play of the former Clipper.

Why do you think playing for Siena has worked better for you than playing for Real Madrid last season?

Marko Jaric: Because this team recognizes me as a point guard, which is the position I have played all my life. With Real Madrid, you know, I came in the middle of the  season because Ettore Messina wanted me to come as an emergency and I played three positions, which I never did in my life.

Can you see yourself playing in Siena for the rest of your career?

MJ: Why not? It’s a great club with a great organization. Yes.

Looking back on your NBA career, are you happy with the way things went for you there?

MJ: Yes and no. I mean, I played eight years in the NBA, but definitely I wish I was a part of some winning organizations over there and maybe getting the chance to play  in the playoffs.

It seems like after you left the Clippers, your NBA career took a turn for the worse. Why was that?

MJ: It was tough. It seems I was always part of a rebuilding situation. In Minnesota, everything was good for a certain time and then they traded Kevin Garnett and traded  all the veteran players. They started just giving chances to rookies and stuff, so it was hard.

Did you lose the passion for the game at some point with all the losing and not getting much playing time?

Do you think there’s been a misconception about you as a player or as a person?

MJ: Maybe, maybe. But I don’t care about that. Because my family and my friends know how much I care about this sport.

You have been living everywhere for the last years. Where do you see yourself living once your playing career is over?

MJ: So far I have residences in New York and Miami. But I’m from Europe, so I would like to spend some part of the year in Europe too.

What do you plan on doing once you retire?

MJ: I can’t tell you that. Nah, I’m joking. I have no idea. Right now I’m only focused on basketball.

But would you like to get involved in coaching or something basketball related?

MJ: I would definitely have to work on my patience if I want to become a coach. I don’t think I can handle players with low IQ.