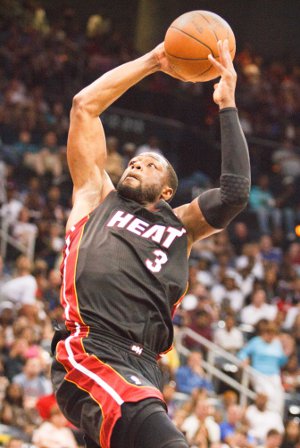 Dwyane Wade was answering a question about the Lakers’ difficulties with the Mavericks, and meant his answer generally, not specifically to his own series with Boston. But it certainly applies.

“It’s all about matchups at this time,” Wade said. “Every team that’s left is a good team. But it’s all about running into the right matchup or the wrong matchup.”

Before the second-round series between the Heat and Celtics, there were four “matchups” that stood out as critical to the eventual outcome. None included LeBron James and Paul Pierce, even though that is one of the compelling one-on-one situations, because their long history suggested that each would perform reasonably well against the other. The prediction here was that if Miami could push on these “matchups” – taking two of four — it would likely advance to the second round, due to the homecourt advantage in Game 7.

So how they are playing out so far?

In a way that makes it no surprise that the Heat holds a tenuous 2-1 lead, with Game 4 on Monday in Boston.

MATCHUP #1: WADE vs. THE RIDDLE

If you’ve watched Wade at all the past eight seasons, you know this:

Wade has repeatedly shown that he doesn’t repeatedly struggle against single opponent or in any specific circumstance. Sure, you can fluster him for a game, maybe two, but eventually he figures it out. So his offensive statistics against Boston this season – by far his worst against any team in terms of both production and efficiency – weren’t likely to hold up for an entire playoff series. And that was true even in spite of some valid explanations for his troubles, from his tiring duty to chase Ray Allen around to the change in his role since his excellent 2010 playoff series against the Celtics.

Just look back to 2006. In three games against the Bulls during that regular season, he shot 24.3 percent, leading to all sorts of theories – Kirk Hinrich was in his head, he pressed against his hometown team, etc. In a six-game first round, he raised his percentage to a more typical 44 percent. In his first four games against Dallas, all losses, two in the regular season and two in the playoffs, he shot 39.4 percent. In his final four games against the Mavericks, all victories, he shot 50.5 percent, on those rare occasions he wasn’t fouled and sent to the line.

What was required from him this series, to win this matchup?

If he averaged 22 points on 45 percent shooting – down from 25 and 50, respectively in the regular season — that figured to akin to “figuring it out.”

In the opening game, Wade blew that away. In the past two, he’s scored enough (28 and 23), but his shooting percentage has slipped (40 percent and 42 percent).

Overall, though, this matchup remains in the Heat’s favor – 29.7 points, 50 percent shooting. And it’s hard to see that changing, now that Wade has “cracked the code,” by getting the ball more on the move, and re-incorporating his midrange game.

It says something about the diminished expectations for the Heat’s power forward that most national analysts characterized his one-on-one matchup with Kevin Garnett as one Miami merely needed to survive. After all, while the Big Ticket hasn’t been punched yet, he’s not nearly the same force he was eight or nine seasons back, when Bosh was just entering the league. If ever Bosh would break through, and prove his worth to the nonbelievers, it should be by taking it to the older man, time and again.

And yet, until he does it, there’s no way to know it, so it seemed sufficient if Bosh simply played Garnett to a draw in this series, by forcing Garnett to take as many jumpers as he takes himself, rebounding him even, and not allowing Garnett to fire up his teammates (and the crowd) by making him look soft.

So how’s that going?

And what Bosh did, and what Erik Spoelstra later said, won’t help him.

He was a no-show, with six points (on 1-of-6 shooting) and five rebounds.

Garnett? He scored 28 points with 20 rebounds.

For the Heat, they were shots to the gut. Bosh has been unfairly ridiculed at times by outsiders, who have cherry-picked his performances and focused mostly on his late game failures, rather than, say, the two 24-point outings against the Lakers. Spoelstra citing a pinched nerve in Bosh’s neck, on a night that Rajon Rondo played with a dislocated shoulder, won’t quiet the cacklers, even if Bosh shook off any sympathy in his own post-game press conference.

Tune in for Game 4, and Bosh’s response. 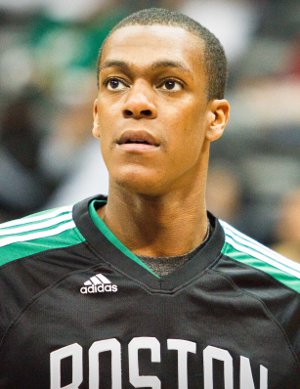 MATCHUP #3: RAJON RONDO vs. HIMSELF

Heat players and coaches went out of their way not to claim credit for Rondo’s minimal impact in the teams’ final regular season meeting on Apr. 10. To them, it appeared that Rondo was limited by an ankle injury and distracted as he’d been since his friend Kendrick Perkins was traded in February.

Spoelstra openly admits that there’s no good way to guard him. Back off to force him to shoot, and he drives by you anyway.

The question was whether Rondo would revert to his prior Heat-killing form, when he averaged 14.3 assists and just 2.3 turnovers in the first three encounters. The Knicks series, during which Rondo came to life, provided a hint. But those were the Knicks and, defensively, they hardly count.

Against the Heat, it wouldn’t matter how much Rondo scored, but whether he could crack double-digit assists in the majority of the games. If he does that, it means that Boston’s offense is flowing, and Garnett and Ray Allen in particular are getting the ball where they need it.

In Game 1, he had just seven assists. In Game 2, a dozen, the one Celtic other than Jeff Green who was playing with speed.

Well, you know the story by now.

He had 10 assists before he got entangled with Wade, and injured his left elbow as he braced his backwards fall. He had another after he returned, on a three-pointer by Pierce, as well as two baskets and a steal.

It was gutsy, and it showed that Rondo has won the mental matchup with himself, and is playing with the passion the Celtics need.

Now, though, he’s faced with a physical one.

If he can’t play at close to 75 percent of his usual level, there’s no way the Celtics win this series.

For most of the season, the Heat’s bench production has been overrated. When 68 percent of the payroll is earmarked for three players, they should produce roughly 68 percent of the offense, especially with the 4th or 5th highest-paid players (Udonis Haslem, Mike Miller) rendered absent or ineffective by injuries.

And the Celtics bench has hard to gauge, due not only to injuries that forced some (like Jermaine O’Neal) to fill in as starters, but also the trade that changed rotations and chemistry.

So the key was which team could consistently get strong outings from two subs.

The strongest sub so far has been Joel Anthony, whose plus-minus for the playoffs is nearing triple-digits. He’s not only altering shots and spiking the Heat’s energy, but he’s showing unexpected confidence in his offensive game, even sinking baby hooks without hesitation. Anthony is playing so well, and the Heat’s starting lineup so poorly, that Spoelstra must seriously consider a change.

Well, that’s depended on the day.

James Jones scored 25 in the opener, but has made just one shot since. Glen Davis, who hurt Miami inside during the regular season, is just 4-for-13. Mike Miller has had moments as a facilitator, even if he’s reluctant to shoot with two braced thumbs.

In Game 3, one from each side stepped up. Green seems to be finally finding a niche for Boston, not as concerned about scoring, but more about quickening the Celtics’ pace. And Mario Chalmers not only made 7-of-9 shots, but not as many mental mistakes as he sometimes does.

So, so far, it’s a slight edge Miami, due to Anthony.

But that’s subject to change as well, if the Heat’s lineup does.

Where does all this leave the series?

A slight edge (2-1) to the Heat, with Rondo’s badly twisted elbow the potential turning point.

Ethan J. Skolnick is a sports columnist for the Palm Beach Post.