Rose is the new nice-guy superstar

Rose is the new nice-guy superstar 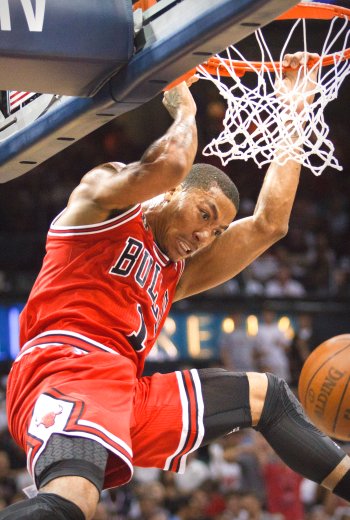 There are many benefits to Derrick Rose playing in his hometown. One is he actually hasn’t had to spend a lot of time going through airport security.

“Does he fly commercial? He’ll probably have to stop doing that,’’ forward Brian Scalabrine, Rose’s Chicago teammate, said about the point guard’s regular-guy image and how it might be affected now that he’s the NBA Most Valuable Player.

Nobody is expecting drastic alterations from the humble Rose since he last week became the youngest man ever handed the Maurice Podoloff Trophy. Still, there figures to be some changes.

Rose, 22, admits to being such a nice guy he hands out his cell-phone number with regularity. That created some problems when news got out that Rose was about to be win MVP. He looked down at his phone and saw he had 80 missed calls.

Yes, he’s gotten a new number since then.

“Me changing my number definitely got a lot of people out of my life,’’ Rose said in an interview with HoopsHype. “Yeah, that always happens (that Rose gives out his number too willingly). I change my number at least four or five times a year. And I held onto this one a little bit too long, for a couple of months.’’

Rose isn’t your typical MVP. He talks freely with the media. That’s unlike the last one, LeBron James, who won twice with Cleveland before joining Miami last summer. James speaks only in tightly controlled sessions.

TNT analyst Steve Kerr compares Rose to San Antonio forward Tim Duncan, the 2002 and 2003 MVP, and Phoenix guard Steve Nash, the 2005 and 2006 recipient, as being the most humble of winners.

“It’s refreshing to see a guy who’s so good and so dominant show so much humility,’’ Kerr said of Rose, a Chicago native who has lived in the city his entire life with the exception of spending 2007-08 at the University of Memphis before declaring for the draft after his freshman season.

Still, there seemed to be some confusion about what exactly Rose had said to start the NBA season. Take a look at some recent quotes from Oklahoma City forward Kevin Durant, the preseason favorite for MVP, and Hall of Famer and Bulls ambassador Scottie Pippen.

“Derrick Rose said, ‘I’m going to be the MVP,’’’ Durant said late in the regular season.

“Derrick Rose made a pretty bold prediction at the beginning of the season, and he’s kind of had to live up to it,’’ Pippen said after Rose had won the award.

Wait a minute. Let’s review the tape. Here’s what Rose said at the beginning of training camp.

He can. But Rose doesn’t believe those comments were a step away from humility.

“It was no guarantee,’’ Rose said. “I guess (some people took it as that). I was just saying that was one of my goals. That’s all I was saying. I wasn’t trying to be cocky or anything. I put in that work, and I have a legit shot to go out there and just try to be the best.’’

The third-year man, who averaged 20.8 points in 2009-10 while playing in his first All-Star Game, is one of the bigger surprises from the start of a season to be named MVP. In a preseason poll of general managers, Rose didn’t get a single mention as the projected winner while Durant got 66.7 percent of the votes.

Flash back to last summer, when Durant averaged a team-high 22.8 points as the Americans won the FIBA World Championship in Turkey while Rose was just the team’s fifth-leading scorer with a 7.2 average. Rose does admit it’s “kind of’’ surprising he would go on win MVP while Durant would finish just fifth.

“At first, nobody had me in their conversation (for MVP),’’ said Rose, averaging 29.8 points in the playoffs entering Thursday’s Game 6 of an Eastern Conference semifinal against Atlanta, a series the Bulls lead 3-2. “And when the season continued, I just crept my way into it. It’s because of my teammates that I’m playing the way I’m playing because with them, they have confidence in me… There’s no way I think if I was on another team that I would be doing what I’m doing.’’

What Rose has done is put himself on the fast track to the Hall of Fame. Every one of the 20 eligible players to have won MVP has made it to Springfield and the eight other ones aside from Rose are shoo-ins to be enshrined.

Rose said it would be “unbelievable’’ to one day make the Hall. To get there, he would rather do it with championship than MVP trophies.

“It’s unbelievable to win (MVP),’’ Rose said. “I just want to be known as a winner when I’m out there. When all is said and done, I want people to go back and talk about me. Whenever, all I want people to say is, ‘When he was on the court, he played hard and he was a straight-out winner.’’’

Right now, he’s pretty well known for being MVP. When the Bulls were in Atlanta for Games 3 and 4, fans yelled with regularlity, “MVP, MVP, MVP.’’

Chants like that for a visitor during the postseason? Even Chicago legend Michael Jordan, who won five MVPs, apparently never got such treatment.

Well, that comes with an asterisk.

“The MVP chant didn’t start until after Michael retired,’’ said Kerr, who teamed with Jordan on the Bulls for the final three of his six titles, including 1998, when Jordan won his final crown and MVP. “It really didn’t. Like (when the player is standing) at the free-throw line. That’s a relatively recent phenomenon, like in the last 10 years… It hadn’t been invented yet. But (Jordan) heard everything else.’’

Obviously, Rose has a long way to go to be in Jordan’s company. While Rose has joined Jordan as the only Chicago player to have won the Podoloff and has lot of years left to get some more, Kerr isn’t sure that will happen.

“He’s young enough but I just think the way the MVP voting process works, he’s not likely to win many more,’’ Kerr said. “He could. But, if I had to guess, (no). It’s so hard. Kobe (Bryant) has won one. Next year, they’ll be a new flavor of the month and the voters will jump on somebody else’s bandwagon.

“Next year, now that they’re coming off a 62-win season, the Bulls, what can they do for an encore? Let’s say they win 60. Everyone will be like, ‘They’re already a great team’… So Bulls fans and Derrick should savor this because it may never happen again. He’s capable of it, but a lot of this award is timing and circumstance.’’

Chicago fans sure hope Rose will get plenty of cracks to win multiple MVPs with the Bulls. If the rules stay similar with a new collective bargaining agreement, Rose, who can’t become a restricted free agent until the summer of 2012 and can’t become unrestricted until 2013, could sign a contract extension this summer.

There’s no reason to believe Rose, who has said he doesn’t want to leave Chicago, would entertain thoughts of a departure. Still, he said it’s too early to say he definitely would sign a contract extension this summer if the rules permit it.

“I don’t know right now,’’ Rose said. “There are a lot of things going on. Of course, I would love to stay in Chicago. But you never know.’’

For now, Rose is most concerned about his Bulls closing out the Hawks for the right to meet Miami in the East finals.

As Chicago continues in the postseason, nice-guy Rose figures he’ll still be giving out his cell number too much. So what will he do if the Bulls end up making a very deep playoff run?