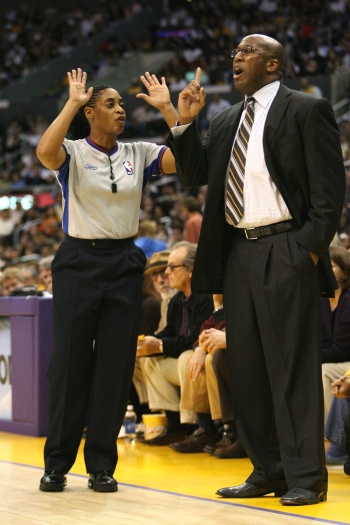 Not only is Mike Brown the wrong coach for the Lakers, he was hired for the wrong reasons.

For sure, Brown is an excellent defensive coach. But which of the holdover Lakers is capable of meeting his standards? Certainly not Derek Fisher nor Lamar Odom. Ron Artest still has quick hands but his sneakers are at least ten pounds heavier than they once were. Pau Gasol’s length and savvy enable him to block shots but he routinely gets bullied in the paint. Even though the NBA coaches automatically voted Kobe Bryant to the All-Defensive team, his days as a stopper are little more than treasured memories.

Only Shannon Brown and Matt Barnes have the stuff to be top-notch defenders. Andrew Bynum still has difficulty deciding when to make a full commitment to ball penetration, when to show-and-recover, and when to stay home. Theoretically, LA’s new coach will focus most on developing Bynum as the kingpin of his defensive schemes – and he has a good chance of succeeding.

Even so, Brown will have his hands full trying to tighten the Lakers’ porous screen/roll defense.

It’s at the other end of the game where Brown demonstrates a profound inadequacy. With the Cavs, he mostly ran LeBron left, LeBron right, and LeBron up-the-middle. Iso after iso after …

Brown’s apologists claim that he had no other choice since LBJ’s teammates were decidedly inferior. Hmmm. The truth is that guys like Larry Hughes, Damon Jones, Antawn Jamison, Mo Williams, Delonte West, Wally Szczerbiak, Zydrunas Ilgauskas, as well as a still-spry Shaquille O’Neal were all hailed as being perfect complements to James before Brown’s short-sighted schemes reduced them to spectators while LeBron had the ball on a string. (It should be noted that, then as now, LBJ is only interested in making assist-passes.)

Even LeBron himself – not to mention his mother, Gloria James – eventually raised public and private objections to the Cavs predictable offense.

Speaking of offense, Jerry Buss (the Lakers’ answer to Hugh Hefner) has declared that Phil Jackson’s triangle is defunct. But Buss also said that elements of the triangle will still be incorporated.

This is sheer nonsense. The triangle is not a play, it’s an offensive philosophy that requires a full commitment to be successful. Running the triangle on a piecemeal basis can only flat-line a system that was instrumental in winning 11 championships.

In addition to Brown’s offensive offense, several of his players and many coaches around the league decried his inability to make meaningful adjustments both during and between games. Brown’s in-game substitutions were likewise ridiculed as creating mismatches that opponents eagerly exploited.

Even more troublesome is Brown’s easy-going way of relating to his players – so easy-going that he’s a pushover. If Phil Jackson, with his overflowing handful of championship rings, had great difficulty controlling Kobe, the ringless Brown will be eaten alive by Bryant. Especially since Kobe’s frustrations will mount as his rapidly approaching 33rd birthday will make it increasingly obvious that he is losing his edge. And how will Brown deal with Kobe three years hence when the 36-year-old will be making $30.5 million?

Why then was Brown hired?

Only because Jerry Buss’s Number One son is calling the shots – and Jimmy can’t differentiate between an X and an O. In fact, Jimmy’s only handle on the game is the study of, and total belief in, statistics. According to him, a player who averages 25 points per game is 25 percent better than one who scores 20 ppg. It matters not to Jimmy when nor how these points are scored.

There’s no doubt that Brown’s coaching stats during his five-year stint in Cleveland are impressive: A total record of 272-138 that includes two seasons of 60-plus wins. A Finals appearance in 2007 (in which the Cavs were unceremoniously swept by the Spurs), and a Coach of the Year award in 2009.

The arithmetic was sufficient to convince Jimmy. The clincher was Brown’s reputation as being totally uncontroversial.

So forget all the requisite praise heaped on Brown’s hiring by players, coaches, and media folk. It’s not politically correct for his contemporaries to speak honestly in public.

Under Brown’s laissez-faire guidance, the Lakers will be a very good team, but will have no shot at winning another title.

The truth is this: If Phil Jackson has left huge shoes to fill, Mike Brown has small feet. 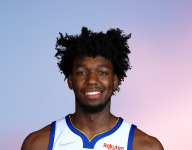