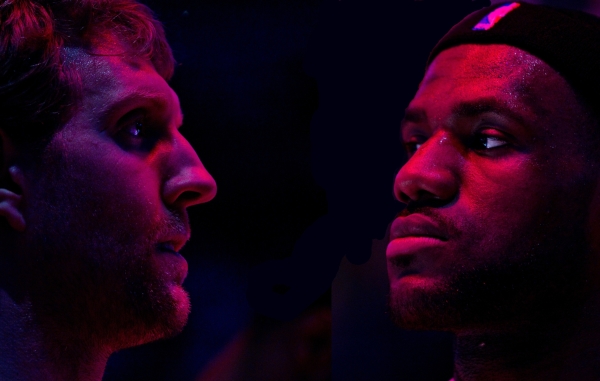 I figured and hoped that the 2011 playoffs would live up to expectations and I am overjoyed that they actually did. I assume you would agree that the two best teams have advanced to the Finals as well, especially the way both they responded in the clutch when things looked bleak in close games.

I am impressed with the Mavericks’ resolve this season. I felt Portland would upset them based on past year reactions and they proved me wrong. I felt the Thunder would be a serious problem and they were, but Dallas showed a toughness to find a way out of a bad situation that didn’t exist on past teams. Most importantly, what they did to the Lakers was a message heard around the world. This team is for real and that’s because of the great defensive balance led by Jason Kidd, Shawn Marion and Tyson Chandler.

The body of work done by their bench has been tremendous as well and although Jason Terry is the leader, the spark is Jose Juan Barea. He will now be facing his toughest task this postseason trying to navigate amongst the ultra fast Heat defenders.

The key obviously is… Can Dirk Nowitzki continue on the tremendous run he has had this postseason? The defenses he has chopped up is no chicken fodder. The Blazers, Lakers and Thunder had very good defensive units and schemes, but not one of them stopped the most versatile 7-foot scorer in the history of this league. Can he keep it against what I think is the best perimeter defense I have ever seen?

The Heat has accomplished something not many thought they would. Some of the greats of the game mentioned so after LeBron James announced he was taking his “talents to South Beach.”

They said, “No way the Heat wins with just three players” and “No way they can share the ball and become a force right away.” After supposedly crying in the locker room following a loss the Bulls, people criticized them for being spoiled and soft. I personally think they have handled this firestorm with tremendous professionalism. I can’t even imagine the ridicule and pressure these three have faced to get to this point.

I will agree with many that LeBron did not handle the transition from Cleveland to Miami gracefully, but that’s all I will criticize him for. They did nothing that professional sports teams don’t do every day. They planned to create the atmosphere that now exists in Miami and someone should applaud them for being business savvy and brilliant in circumventing a process normally controlled by general managers.

Guess what? It is working.

This is indeed a three-man team with a few parts that help, but not consistently. It was totally proven in the fourth quarter of Game 5 against the Bulls when, for the hundredth time (seems like), the trio scored every point to win a game.

I mentioned at the start of the season that the Heat would win it all and it centered on the difficulty come playoff time of having to single cover all three players. It is difficult to have to double only one, but to think about the idea of three is mind-boggling. That’s why this team is dangerous in the fourth quarter and it seems they have figured it out.

I also said, and will continue to say it despite criticism, this is LeBron James’ team and will remain so while he’s in his prime. He is the best all-around player that I have ever seen. Despite some negatives people conjure up, he still is and he has proved it this postseason.

Dwyane Wade is great, but he is not in that conversation and it should cease especially after the recent displays by James.

Miami is rolling and it’s all fueled by that ultra quick defense. They won Game 5 because they got stops down the stretch and this has been their mantra the entire postseason. The Boston win was definitely their mini championship and it gave them a quiet confidence to actually do a reverse sweep against the Chicago.

The re-emergence of Udonis Haslem and Mike Miller has been great, but the defensive abilities of Joel Anthony make him an absolutely key player.

Chris Bosh has accepted the third-wheel role and I applaud him for checking his ego at the door. It’s why this union has worked. (Message to Russell Westbrook: Please call Bosh after playoffs and get his roadmap to doing it so).

These Finals will intrigue and confuse us because we could have a seven-game decision or a flameout from either side. Why? Because both teams have a kryptonite effect on the other.

The Mavericks have an offensive-minded trio off the bench in Jason Terry, Jose Juan Barea and Peja Stojakovic. If they are struggling offensively against the defensive-minded Heat, that will force Rick Carlisle to not use them much for long stretches because they are not good defenders. Erik Spoelstra will make sure he has a lineup on the floor that forces those players to guard Wade or LeBron.

On the other hand, if the Dallas’ zone defense forces the Heat to take jump shots, that will enhance their chances of winning in quick fashion. Miami is definitely a drive first, shoot from perimeter second team.

I have never liked the 2-3-2 format because it actually gives the road team the chance to finish the series at home if they win one of the first two. Expect the Mavericks to be focused on stealing Game 1 and seizing control early with a tremendous psychological edge.

We have a lot of stories surrounding both teams. Let’s hope the Finals live up to the billing.

The Mavericks will win if…

– They keep James and Wade out of the paint, which will allow Tyson Chandler and Brendan Haywood to stay out of foul trouble.

– Take care of the ball against a tremendous defense that will fill passing lanes at lightning speed.

– Bench can stay on floor for long periods despite weak defensive abilities.

The Heat will win if…

– They penetrate the zone defense the Mavericks will use consistently.

– Make Nowitzki a passer and volume shooter and limit having to double team him until LeBron defends him in the final period.

This is a tough one for me from a personal level. I have a close relationship with both Shawn Marion and Jason Kidd. I am definitely rooting for them to win their first championship. Jason has a window that’s closing (he’s 38 years old) and this is his third trip to the Finals. If you had to pick one player that deserves it, it’s him.

The Mavericks do worry me in that the Thunder, for all practical purposes, just melted down at the end of three games. I don’t envision that same scenario against the Heat. Miami has three closers and Dallas only has one.

The odds become stacked if Nowitzki is being forced to move the ball or is not making shots. Remember Miami’s defense recovers quick and double-teams better than any other squad I have ever seen.

LeBron and Wade are just too much and the Mavericks will last six games finding out. Miami 4, Dallas 2.