Unknown at home, Vesely looks to make mark in the NBA

Unknown at home, Vesely looks to make mark in the NBA 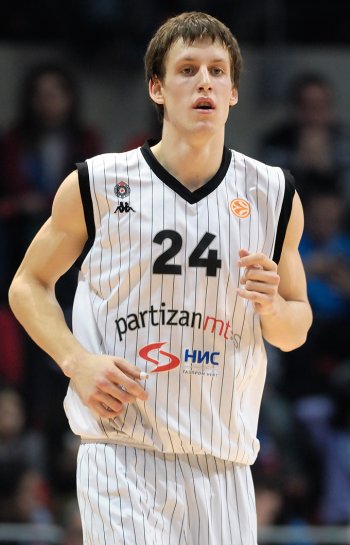 Czechoslovakia used to be a hotbed for European basketball, regularly competing for the gold medal at the Eurobasket against the almighty Soviet Union and Yugoslavia. Between the 40’s and the 80’s, the Czechs made the final of the tournament seven times, once finishing on top. For the last 25 years, though, basketball has been an afterthought in the area, which has since been divided into the Czech Republic and Slovakia.

Only in recent years the Czechs, who finished 15th out of 16 teams the last time they qualified for the Eurobasket in 2007, have been able to produce high-quality talent again – although it has frequently been developed abroad. Lacking a strong structure in men’s basketball, the country’s top players often leave at a young age to flourish elsewhere. That was the case with Jiri Welsch, the most renowned Czech player in the last decades with four years of NBA experience under his belt, and it’s also true for the up-and-coming Jan Vesely, who’s almost a lock to become a lottery pick on June 23, thanks in part to the lack of star power and depth in this year’s draft.

Vesely, like Weslch, took the Slovenian route and signed with Slovan Ljubljana when he was 16, only four years after he began playing basketball. It was a move that paid off for him and paved the way for a future NBA career.

“It was difficult for me to leave my family and my country when I was 16, but I told myself that if I wanted to play basketball I had to put something on the side,” Vesely said in an interview with HoopsHype. “It was hard sometimes, but my parents would always support me and call me on the phone or Skype. Those years that I was alone, they were also with me.”

Vesely, who was voted FIBA Europe Player of the Year in 2010 ahead of the likes of Ricky Rubio and Jonas Valanciunas, comes from a family with a strong sports background. His father was a pro basketball player and coach while his mother played volleyball. In the Czech Republic, both games take a deep backseat to soccer and hockey, which is king.

Leaving the family house as a teenager was tough for Vesely, but the transition was made easier by the coaches he found along the way.

“Mirsad Alilovic, who was a coach in Slovan and is now a coach in Olimpija Ljubljana, was very important,” Vesely said. “He was the main coach that helped me in my career. I was alone in Slovenia and he was there with me. If I needed help with anything, he would come and help me. Not just with basketball stuff, but also with my personal life. He helped me a lot, but once I moved to Partizan there’s also coach Dusko Vujosevic, who gave me a chance and worked hard with me. Those people were the more supportive for me during my career.”

Although Vesely calls Dirk Nowitzki his inspiration as a player, the lanky 6-foot-11 forward is more often compared to Utah’s Andrei Kirilenko due to his impressive combination of athleticism, size and length. Like Kirilenko, he also lacks a consistent jump shot and a strong body frame.

“He’s a bad shooter and has to improve in that area, but he has all the time in the world to do that,” said Nikola Loncar, a former world champion with Yugoslavia that’s now doing work as an NBA analyst for Spanish TV. “He’s a great leaper, but doesn’t take physical contact well. He needs to put on more muscle. His body type is a lot like Toni Kukoc‘s right now. It’s good that he can run and jump so well, but he needs to be able to deal with physical play better.”

Vesely is having a fairly good season with Partizan Belgrade, the dominant Serbian club he joined three years ago, with averages of 10.1 ppg and 3.6 rpg in Euroleague play. But the Czech probably didn’t step up as expected for a team that lost a couple of key players in guard Bo McCalebb and center Aleks Maric last summer.

“He had a chance to be a leading player for Partizan this year and he wasn’t,” Loncar said. “The team wasn’t as strong as last year and the American players took the leading role and he couldn’t put himself above them in the pecking order.”

While his inability to lead a squad that didn’t even make it to the quarter finals of the Euroleague could raise questions about his assertiveness, there are no red flags about Vesely’s character or commitment to the game.

“From what I hear, he’s a very cheerful kid,” Loncar said. “Always with a smile in his face. The people in Belgrade love him. He learned Serbian pretty fast, although it’s not that hard when you’re Czech. He’s a true professional, very dedicated to basketball and a hard worker. He’s never been involved in any scandal during his time in Belgrade, as opposed to other players that have gotten into fights. Belgrade is a dangerous city, but he’s been a model off the court.”

Unlike other European players that send mixed messages on their interest in the NBA (for example Nikola Mirotic, who entered his name in the draft but also re-signed with Real Madrid till 2016), Vesely is steadfast about his desire to play in the United States as soon as next season.

“I removed my name from the draft last year, but this year I really want to play there,” Vesely said. “I want to go to the NBA this year and that’s it.”

According to his agent, Aleksandar Raskovic, Vesely will not take part in workouts with NBA teams. Raskovic said his client will be in New York on June 17, though, to go through physical tests akin to the ones draft prospects had at the Chicago combine earlier this month.

Vesely deflects all questions about what he would do in the event of a lockout to his representation, but there’s little question he would land a big contract with a top European club if it came down to it.

Joan Creus, the highly regarded general manager of 2010 Euroleague champion FC Barcelona, thinks Vesely is “up there with the best small forwards in the continent right now.”

Creus also believes Vesely could use another year or two in Europe to further develop his game and basketball IQ.

That would be Plan B in any case. If everything goes according to the script, Vesely will become the third Czech player on an NBA roster next season. Too bad not many people in his country will care about it.