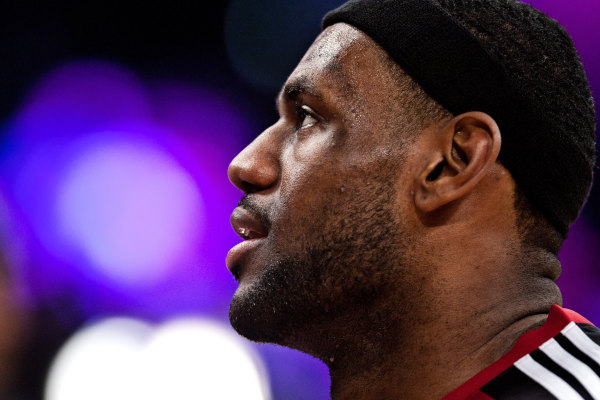 The Dallas Mavericks philosophy in the opening game of the NBA finals was sound, but LeBron James continues to ruin any game plans.

The Mavs wanted to stop Miami’s transition opportunities, and make the Heat beat them from the perimeter. The problem is that James, never known as a pure shooter, has gained increased confidence in his three-point game as the postseason has worn on.

And in Miami’s opening 92-84 win over the Mavericks, the Heat clearly followed James’ lead.

Miami made 11 three pointers and the ringleader was James. The fallaway three that James hit at the buzzer to end the third quarter to increase Miami’s lead to 65-61, was symbolic of the damage James did from the perimeter. At that point he was 4 for 4 from three-point range.

What’s worse from a Dallas perspective is that James was just as dangerous when distributing the ball. Nobody does a better job recognizing a double-team and getting rid of the ball to an open teammate like James.

Shawn Marion, who played as well as any Maverick besides Dirk Nowitzki in the opener, and DeShawn Stevenson often appeared to do a solid job on James, but he never forced the issue and more importantly, he made jump shots, which in the past has been the only hope of containing LeBron.

And then Dwyane Wade, who shot just 3 of 10 and scored seven points in the first half, proved to be the closer in second half, especially the fourth quarter. Wade finished with 22 points and like James was also dangerous as a distributor when Miami was able to spread the floor.

It sounds so simplistic, but Dallas and no other NBA team has a defender capable of stopping Wade and James an entire game. It’s hoped when playing these two that they will miss jumpers and not get to the rim.

The fact that both are hitting jumpers forces defenders up on them and then they are too lethal taking it to the basket.

The Heat also exploited another weakness of Dallas – rebounding. For as great at Nowitzki is, he has to be more tenacious on the boards. There were several rebound chances that went by him.

Miami had 16 offensive rebounds compared to just six for the Mavericks.

And at least in Game 1, the Mavericks bench, perceived as a strength, was a detriment to Dallas.

Even Jason Terry was a non-factor in the second half. And it is not a coincidence that Miami coach Erik Spoelstra put James on Terry late in the game.

What does it say for the Mavs that their best player off the bench was Brendan Haywood (3 points, 7 rebounds, 3 blocked shots)?

So what does Dallas do at this point?

For a while in the first half, the Mavs had success playing zone defense, but eventually Miami foiled that strategy by hitting three pointers

Miami decided to allow Nowitzki to get his points and dared the rest of the team to beat them. They didn’t even have to use James to stop him.

The difference is that Miami was able to double-team Nowitzki and made him work for his 27 points. When either James or Wade is doubled, they are such strong playmakers that they make the opponents pay for this strategy.

James had 24 points (9 of 16 from the field, 4 of 5 three-pointers), nine rebounds, five assists and, more importantly, just one turnover in more than 45 minutes. When he is on that type of roll, one can talk about any defensive adjustments, but in truth, James is the only one who can stop himself.

And it sounds so obvious, but Dallas has to hit open shots. As great as Miami is on defense, the Mavs shot 37.3 percent from the field and were outscored beyond the arc by the Heat. Miami made 11 threes in 24 attempts, while Dallas was 9-22 from beyond the arc. The Mavs were short on many open jump shots.

If an outside shooting team like Dallas is outscored from three-point range, it’s a recipe for disaster.

That’s because the Mavericks had little success scoring inside on Miami.

What has to be disconcerting for Dallas is that Chris Bosh shot just 5 for 18 and it still didn’t matter.

The Heat didn’t play their best overall game in the playoffs, but it was one of their best defensive efforts, which is saying something.

No, it’s too early for that, but all the confidence the Mavericks gained in winning their first three series, seemed to be shaken by the Heat.

Dallas has to be tougher going to the boards, make open jumpers, get better production from its bench and have a secondary and third scorer to help Nowitzki. Even if that is all done, it is no guarantee, especially if James sustains the level that, even by his standards, is off the charts.