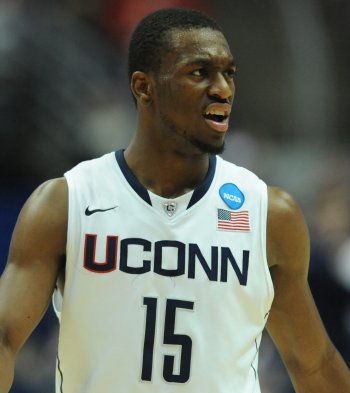 UConn product Kemba Walker has the best college resume of all draft prospects, but he faces questions about his ability to play point guard in the league. During the draft process, Walker is trying to convince NBA types that should not be a concern for them.

Are you enjoying the draft process so far?

Kemba Walker: Yeah, I’m enjoying it. It’s the first time I go through a process like this. I’m just trying take everything in and just get used to it ’cause it’s a different lifestyle now and I have no choice.

Anything that has surprised you about the whole thing?

When you go through those interviews with teams, what’s the main thing you want to make clear about yourself?

KW: The main thing some teams worry about me is that I’m a shooting guard… Stuff like that. So I try to let them know I’m a point guard first. That’s really it.

The player that is projected to go No. 1 in the draft, Kyrie Irving, is also a point guard. In which areas do you feel you’re better than him and where do you think he’s better than you?

Do you see yourself becoming a locker room leader in the NBA like you were at UConn?

KW: Yeah. It’s going to be hard my first year because I’m going to be one of the young guys in the locker room and it’s not like veterans are going to follow my lead. But I will try my best to gain the respect of the veterans.

Do you think a point guard can be efficient being just a leader on the court but not in the locker room?

KW: I don’t know about that. You have to be a leader at all times, especially point guards. You still gotta have some type of leadership off the court.

Do you care more about your draft position or about the team that selects you?

KW: It doesn’t really matter. I just want to have my name called. That’s really it. Being able to be drafted and just getting the chance to play in the NBA.

Some guys don’t really want to play in Canada. How would you feel about getting selected by the Raptors?

KW: I don’t care, to tell you the truth. Wherever I go, I will try to play and show my leadership. I would try to bring a winning attitude to that organization. So yeah, it doesn’t matter.

Which player has influenced your style of play the most? Have you modeled your game after anyone?

KW: No, I’ve had guys that I really like, but I didn’t model my game after anyone.

Which point guards have you enjoyed the most?

KW: Chris Paul, who is such a great point guard, or Derrick Rose, who’s had a great year this year.

Does winning the NCAA title compare to anything you’ve experienced before in your life?

KW: No, that was awesome. Maybe you can compare it to me graduating. But winning the national championship was such a special thing for me and my teammates (that you can’t compare).