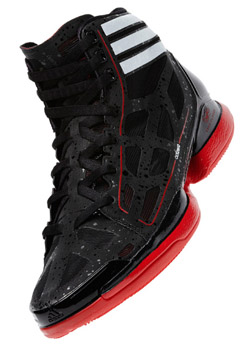 By way of full disclosure, I am a basketball shoe freak. I love basketball shoes. I love the business of basketball shoes and I am drawn to the storylines that power the sneaker business. I am a huge fan of adidas because I like what they stand for as a brand and I think they are doing interesting things. You may not agree, but that’s OK.

By now there is almost no chance you have not seen an ad for the new adidas Crazy Light shoe. Whether it’s watching the NBA Playoffs or browsing the web (including HOOPSWORLD or HOOPSHYPE), you have likely seen Chicago Bulls’ guard Derrick Rose talking about the new 9.8 ounce basketball shoe that just dropped at retailers everywhere.

Sure, adidas spent a little bit of money with our parent company, but this story is more about an interesting product than anything else.

If you have not seen the new shoe, it’s unlike anything else on the market, in that is has a crazy exoskeleton- type design and is incredibly light… crazy light as adidas likes to say.

Lawrence Norman is Vice President, adidas Global Basketball and a former international player.  To say Lawrence is a basketball freak puts it lightly. So as I got curious about the hype around Crazy Light, I went to him for some answers and some insight.

“Our goal at adidas Basketball is to enable athletes to become one step quicker and jump one inch higher,” Norman said of his group’s pursuit of an ultra-light basketball shoe. “After talking to athletes over the past handful of years, and really being an athlete myself, going back all the way back to my playing days, the most important thing to me and the most important thing to all the athletes we’ve been talking to is that ‘light’ matters and ‘light’ is right. And they feel that an ounce off here and an ounce off there will enable them to become quicker on court.”

With so much competition for the shoe buyers’ dollar, all of the shoe companies are trying new things to grab customers. From adidas’ perspective, going light and building a light shoe was the logical next step as it’s been a game-changer in the world of running shoes.

“The shoe is innovative for a lot of reasons,” explained Norman. “First of all, is the Sprint Frame. It’s the heel counter, it’s something we learned from the adiZero F50, the soccer shoe. It really gives you good lock down on the heel and prevents ankle rollover. Also you have the Sprintweb, which is the upper in the construction, it’s almost like a spider web and the spider web is super strong and it’s built that way, that you combine the execution of the Sprintweb with the Sprint Frame together, that’s what makes it really strong and also light.”

With any new shoe concept, durability and functionality trump a lot of things.

“This shoe has tested incredibly well. It’s preforming really well,” explained Norman. “You can see the reviews that are already online at places like Eastbay, for example, that just wrote about it, giving it a straight A. This is not only the lightest shoe, but also one of the best shoes we’ve ever built.

“Athletes want a lighter product, whether that’s a low top or a mid-cut, and it’s not only in basketball,” revealed Norman. “The trend in lightweight running has really become a big factor in that market place.

“I believe there has been $600 million extra added to the running market in the last three years just in the lightweight running market alone. In basketball, the shift towards light has created a demand for consumers to pick up the shoe right away to judge how light it is or check in an Eastbay catalog, for example, to see what the weight is because all weights are now listed. ‘Light’ has become the leading factor in decision making for all of these athletes and consumers.

“I believe the trend is headed towards “Light”,” explained Norman. “I don’t believe it’s going away and I believe we’re just getting started. For us to put a stake in the sand and say we have the lightest shoe at 9.8 ounces right now was an important thing for us to do.”

Is 9.8 ounces, which is freaky to hold in your hand, the floor or the ceiling in shoe design? Can a shoe be constructed to be lighter and remain functional?

“It going to be fun trying,” joked Norman. “We are an innovation company. Innovative is a brand value. It goes all the way back to adidas building spikes for Jesse Owens in 1936. It is our job to continue to explore new ways to help athletes to be better. If that means being lighter, which we believe it does, then it’s our job to continue to innovate to see if we can make it lighter but also to make a shoe continue to perform better and better each season. “

Adidas released a limited number of first-run Crazy Lights to its product endorsers in several leagues, so by now you may have seen them on the feet of players in NBA Playoff games or during the Euroleague Final Four.

“Response has been great,” explained Norman. “We have had players from Derrick Rose wearing it to Mario Chalmers in the Finals. This is a global launch so even a guy name Dimitris Diamantidis, MVP of the Euroleague, was wearing the shoe as well. The shoe has global appeal and athletes of all shapes and sizes love it and the response has been great so far.”

Shoe companies typically do not launch new shoes at the end of the basketball season, so the decision to launch the Crazy Light before summer and during the NBA Finals was an interesting move.

“We projected the Bulls would be much better this year, even though they exceeded a lot of people’s expectations… the New York Knicks being better… the Lakers again being strong… the Celtics again being strong. The NBA is at its best when the bigger markets are winning. There are more ratings, more sales, more replica sales. We projected that, so why not be on TV promoting a product when all eyes are on NBA? We predicted that this would the perfect time and so far it’s turned out to be pretty good for us.”

The Crazy Light TV spot has been saturated during the NBA Playoffs and features Chicago’s Derrick Rose talking a little smack and showing a little swagger. With adidas’ stable of endorsers, choosing Derrick Rose, who just became the youngest MVP in NBA history, seemed smart, but there was more behind the decision to use Rose.

“This is a global spot first of all,” clarified Norman. “Derrick has appeal all over the world from Chicago to Shanghai. Guards want to be him. In the U.S. we understand in a big market like Chicago, he’s got an incredible playing style. In a place like Shanghai, they can aspire to be him. They may love and be proud of Yao Ming, but they are not going to grow up to be 7’6”. They can grow up to be a lightning quick 6’3 guard like Derrick.

“He certainly has global appeal. He is in the right market. He has the right playing style. He’s got the right personality that really resonates not only with consumers but with our brand. He’s humble, he’s hard-working. He is all about team first. He’s the perfect candidate to be the lead in this commercial.”

How the Crazy Lights go over still remains to be seen, as they officially went on sale today.

“Presales have been very, very good,” said Norman. “Consumers had a chance to buy on Eastbay and at adidas.com for the past month or so. Preorders have been very, very brisk. We’ll find out more after this weekend what the true results are going to be, but so far what we’ve heard in the first few hours has been very optimistic. “

The idea of a 9.8 ounce basketball shoe is very interesting, we’ll have to see how the market responds, but as a shoe freak the concept is extremely appealing and they look pretty hot.

adidas is a content sponsor of HOOPSHYPE and Big Lead Sports.