Nowitzki is not enough

Nowitzki is not enough 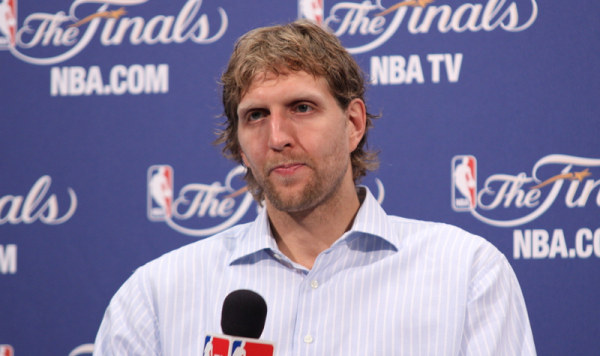 After three games, this series is good because of Dirk Nowitzki. Miami should be looking for a sweep in Game 4 if it wasn’t for the best player this postseason. I am amazed at how he makes shots. I have seen enough in these playoffs to say that he is the best seemingly off-balance shooter I have ever seen.

I say seemingly because he actually releases the ball at a point in his shot where he is still. If you have the option of freezing the game and rewinding it, just watch how he dips his rear end into a sitting position and elevates into the fadeaway execution of his shot. The balance he exhibits is amazing for a seven-foot player.

He almost did in Game 3 what he did in Game 2, when he led Dallas to an incredible comeback. The way he stepped up and carried the team on his back in that 22-5 run was legendary.

The Mavericks are definitely the best comeback team in a while, but we are ignoring the negative aspect of being in that position in the first place.

The Mavericks are running on fumes since their sweep of the Lakers and it is showing in their inconsistent play against the Thunder first and now the Heat. They are being exposed more right now because Miami is the best perimeter defensive team since the Chicago Bulls, but I would give the Heat an edge in the speed department.

Jason Terry, Jose Juan Barea and Peja Stojakovic are very good catch-and-shoot players, but the usual one or two seconds they have to shoot because of teams being spread out by the great offense of Nowitzki have diminished to about half a second. That split second will force any great shooter to rush the shot and become inconsistent.

The obvious response would be to attack off the dribble, but the quick rotation and shot blocking of Miami’s athletic defenders has been too much for those three to even keep the defense honest.

Losing Brendan Haywood for Game 3 was much bigger than what you would think. Tyson Chandler played 40 minutes and that is too much for a player that will give you the same stats in 34 minutes.

The Heat have dominated this series and for all practical purposes should be looking for a 4-0 if not for the meltdown of Game 2. They have controlled the series’ tempo and have led consistently in all three games.

Dwyane Wade has been incredible in his own right offensively and rebounding the ball, but LeBron James has been the same in regards to his defense on Terry, playing the passing lanes and running the offense.

When Wade is forcing the issue and attacking the rim, he becomes the best player on the floor immediately because no one can guard him when he commits in that manner.

The same goes for LeBron, but the biggest accolade is his desire to run the offense and make great unsung passes to help his team win – like the one to Mario Chalmers across court for a big three-point shot in the fourth quarter and the almost behind-the-back pass to a struggling Chris Bosh to hit the game winner.

The one thing that’s obvious is Wade, James and Bosh are determined to focus on the win instead of who’s scoring. I’m appalled at the stupid questions and criticism about who should be scoring… and shining a spotlight on the star that is struggling afterwards.

The one statement I heard loud and clear when these three players decided to join forces was that they would struggle in regards to sharing the ball, but I think they have done a masterful job of leadership and holding each other accountable.

The criticism and questions I hear reek of dislike and disdain because they are two games away from accomplishing something not many people thought they would eight months ago.

Those two games will not be easy because the Mavericks are extremely resilient and they still have two more on their home court. Expect them to treat Game 4 as their Game 7.

Dallas will not accomplish this with Nowitzki alone. They need better production from a struggling bench. Barea and Stojakovic have shot a combined 6 of 25 from the field so far.

Too much pressure is on Shawn Marion. He may have to be more assertive offensively, but that’s hard when you have to guard James for 40 minutes.

What the Mavericks must realize is that a low-scoring game is not the antidote. They need to speed the game up like they did in the last six minutes of Game 2 and in the third quarter of Game 3. It is offensive suicide to try to navigate Miami’s stifling defense by pounding the ball to Nowitzki every time down the floor.

I expect a change in offensive philosophy in Game 4 and I also expect Barea, Stojakovic and Jason Kidd to fire away more freely from long distance. It is do or die, and if you thought Games 2 and 3 were suspenseful barnburners just wait for Tuesday night.

This will undoubtedly be the most physical of the four. The Mavericks know all too well the series will be over with a Miami Heat win.