Take the Rock to the Rock

Take the Rock to the Rock 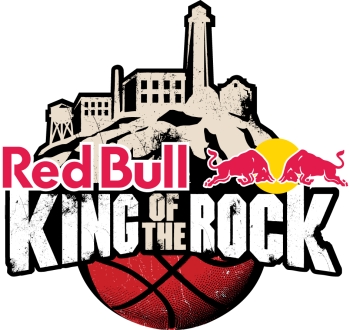 On September 24, 64 players will once again lace up their shoes, steady their nerves and set foot on the island of Alcatraz in hopes of winning it all at Red Bull King of the Rock.

First held in 2010, Red Bull King of the Rock is the only official sporting event held on Alcatraz and the first time basketball has been played on the hard concrete of The Rock since the inmates left the island more than 50 years ago.

The one-on-one basketball tournament is ready to tip-off for another round, having grown from 6 qualifiers on the west coast in 2010 to 56 qualifiers around the globe in 2011 (23 in the United States). The event’s international reach is sure to make the competition this year tougher than ever.

Respect will be earned and feelings will be hurt, but there can be only one King, so out of 64 finalists, only one will be crowned “King of the Rock.” The event will once again be hosted by basketball superstar Rajon Rondo. More info can be found at redbullusa.com/kingoftherock.

“The Rock is perfect for one-on-one basketball. It’s just you against the other guy – no one to set picks, no one to help you,” said Rajon Rondo. “I’m definitely looking forward to heading back to Alcatraz for Red Bull King of the Rock and seeing what kind of game these guys can bring.”

This summer, the world’s best shooters, post players and ball handlers will put it all on the line at high caliber one-on-one battles at Red Bull King of the Rock qualifiers. The top eight players from 2010, led by Champion Izeah “Clutch” Bowman from Los Angeles, will automatically advance to the finals on The Rock. There they will face off against 56 new qualifiers from around the globe, hungry to prove that fresh blood can prove more valuable than experience. International qualifiers will take place in the following countries: Canada, Spain, France, Lithuania, Slovenia, Serbia, Romania, Ukraine, Turkey and Israel.

Both the qualifiers and finals will incorporate a regular one-on-one basketball set-up where players go head-to-head on an outdoor court using a single elimination tournament bracket. There are only two options: win and continue on, or lose and go home.

Games will last five minutes and be subject to regulation hoops rules and scoring (two and three pointers). Winners must immediately hop to the next court to face another player, so while pure hoops ability is essential, strategy and endurance will also play a major role in overall victory. Qualifiers will contain four intense half-court games going on simultaneously, until all eyes are on the final game. Players have to be tough to make it to The Rock, but must also play smart – five fouls equals an automatic loss.

Red Bull King of the Rock is open to all ages, amateur and pro alike. Registration is first come first served at each qualifier, so players should arrive early to grab one of the coveted 64 spots. Players interested in competing should visit redbullusa.com/kingoftherock for more information.

Red Bull will be teaming up with 24 Hour Fitness, Skull Candy and Dime Magazine for this historic event.

For all media inquiries including team interviews, event history and past photos, please contact Scott Houston at 310-740-7099 or scott.houston@us.redbull.com.

Through the Red Bull network, hi-res video and still images are captured and made immediately available for editorial use for all media channels including television, film, print, mobile, and digital. The content is centrally located in the Red Bull Content Pool for media partners at redbullcontentpool.com or Twitter.