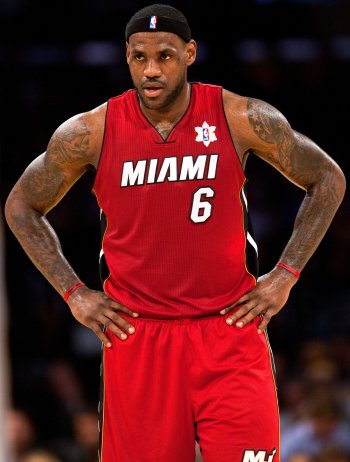 As in, ‘what has happened to LeBron James?’

The man who famously took his talents to South Beach was vocal, animated, determined and very captain-like before Game 4 of the NBA Finals, exhorting his Miami Heat teammates to leave everything on the floor. He told them that it was a must-win game and he told them to play as if their backs were against the wall.

He said all the right things. Then he went out and laid a Brontosaurus egg as Dallas, once again, rallied in the fourth quarter to square the NBA Finals at 2-2, taking an 86-83 victory.

LeBron? LeNon Factor. He scored 8 points, the first time in his career he has been held to single digits in a playoff game. (Sadly, for Miami, that made him the Heat’s third leading scorer in the game.) He made only three baskets and only one was not a dunk. He took one shot in the final seven minutes as the Heat proved unable and incapable of closing out a game for the second time this series.

Yes, James did have 9 rebounds and 7 assists and a couple steals, but 8 points? Five Mavericks had more, including DeShawn Stevenson, who had called James and Dwyane Wade “actors” after Game 3, and Jason Terry, who raised some eyebrows when he openly (and, we all thought, stupidly), wondered if James could stay with him over the course of a seven-game series.

This Snowman Submission by James came after he scored 17 points in Miami’s Game 3 victory, another downer by Jamesian standards. James has clearly played second (and even third) fiddle in this series to Wade and, as was the case in Game 4, Chris Bosh. His scoring output has declined with each game, starting with 24 in Game 1 and then dropping to 20, 17 and now 8. He is 9-of-25 from the field in the last two games.

This comes after he was huge in beating Chicago and Boston. In each of those series, he was held to less than 22 points in one game. Miami lost both of those games; the only loss in the series for the Heat.

Terry seemed to be tempting fate, or tugging on Superman’s cape, when he suggested that James might have trouble staying with him throughout the series. These remarks came after Game 3, when Terry disappeared down the stretch and the Mavericks lost by a basket. James and the Heat shrugged it off, but it sure looked like James, and not the estimable Dirk Nowitzki, was the one in Game 4 who was battling flu-like conditions.

It almost seemed like a déjà vu from 2010, but this isn’t Cleveland-Celtics from last year. Not even close. James basically threw in the towel in that series with some truly mind-boggling play in a couple of those games.

James, Wade and Bosh made a commitment to play together and win together and it is on them to make it happen. It’s not on Erik Spoelstra or Pat Riley. It’s on those three. That is why we will not see anything close to the Game 4 LeBron again in this series. He has too much riding on a Miami championship – and the Heat, in case you’ve forgotten, are still in the driver’s seat. A bounce here or there and Biscayne Boulevard is getting ready for a championship parade.

And let’s not forget how well the Heat have played to get to where they are. The defeat in Game 4 marked the first time this post-season they have lost twice in a playoff series. In the last three months, they have played 37 games and won 29 of them. They took four straight from Chicago, a team that hadn’t lost three in a row all season.

But they’ve also blown two big fourth-quarter leads in this series. The Game 2 meltdown was unforgivable, especially at home. The Game 4 collapse was less so, mainly because Dallas only erased a nine-point deficit in the last 10 minutes. It just seemed greater because it was such a defensive-oriented, low-scoring game.

Much will be said and written about the grit and resiliency of the Mavericks and it’s all true. They have played from behind in all four games. The win in Game 4 marked the sixth time this post-season they have won despite trailing after three quarters. They showed great resolve in Game 4 and Nowitzki was awe-inspiring, given his health.

But the Heat still control this thing. They can pretty much end it with a win in Game 5 but even if they lose, they go back home for Games 6 and 7, just like the Lakers did last year. Wade has been spectacular. Bosh has had his moments; he had a great first half in Game 4.

But the man in a position to be the game-changer, series-changer, has been uncharacteristically quiet so far. Knowing James, he won’t start shooting at every opportunity in Game 5 to make his presence known. But he will know the spotlight, which always shines on him, will be at its brightest and most intense. He needs to be the same.