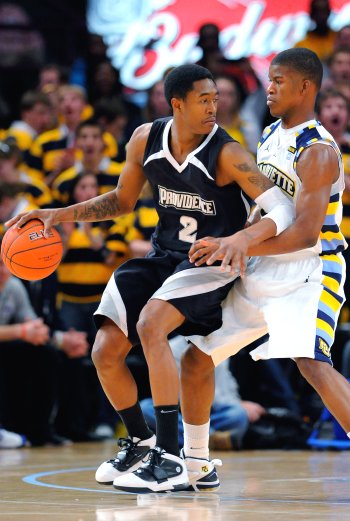 The leading scorer in the nation, Brigham Young’s Jimmer Fredette, became one of the most popular college players in recent history last season. No. 2 in the scoring rankings was little known outside of Providence. Marshon Brooks is trying to change that in the weeks leading up to the draft.

Are the workouts and all the flying starting to take a toll on you physically?

Marshon Brooks: Yeah, I little bit. I would say the travel more than anything. I tweaked my ankle in New York and now every time I fly my ankle swells up a little bit. It takes a toll on you, but you have to stay ready for it.

Do you get more nervous about the workouts now than you did about the actual games in college?

MB: I get more nervous about the workouts. I mean, in college you may be nervous but at one point you got comfortable. But working out, you know Michael Jordan and Larry Bird may be watching and you get a little nervous. Once you get into the flow of the workout, it’s not a problem. You just go with the flow.

I’ve read some interviews you’ve done recently and it seems you’re now a little bothered about the Kobe Bryant comparisons. Is that right?

MB: I respect Kobe Bryant’s game so much that I don’t think anybody should be compared to him. I might play like him a tiny bit, but I would say I play more like Jamal Crawford than Kobe Bryant.

Have you had the chance to meet Kobe Bryant?

MB: No, I didn’t. Hopefully I’ll have the chance to meet him soon.

Will you get a little star struck when you meet him?

MB: Nah, I doubt it. Maybe I would have been a couple of years ago, but now even if I get a little star struck you can’t show it if you want to play against him.

You didn’t sign with one of the big NBA agents – Arn Tellem, Dan Fegan, etcetera… You chose Seth Cohen. Why him?

MB: I think he’s a great guy. I had a couple of meetings with him and he showed me what he can do, his resume overseas, where it’s much tougher to negotiate a contract than in the NBA. I trusted him off the bat. Besides, I didn’t want to go with an agency with five or six players in the draft. I just wanted to be the main focus and start my own foundation.

What was the key to improving so much between your junior year and your senior year in college?

MB: Just hard work and getting stronger mentally more than anything. Also getting my body ready for the nigthly beating an getting confident with my body to not shy away from contact and getting to the free-throw line to make things easier for me.

You took a lot of shots in college. Can you adjust easily to not taking so many once you’re in the NBA?

MB: I don’t think it should be a problem. I only took a lot of shots in college because I had to. At Providence, we had a lot of players that were young. They went to me to keep us in the game. If you look at the stats the year before, I wasn’t taking as many shots and I was pretty effective as well.

When did you realize you had the chance to be an NBA player?

MB: I always felt like I had the talent, but I knew I had to work on my strength, which is something I still have to work on. But I go home and I get the chance to play with a lot of pros like Louis Williams and Josh Smith at the Pro-Am in Atlanta. When I played against those guys, I played well. So I had the confidence that I could play with anybody. Louis Williams is a proven basketball player and Josh Smith is a proven basketball player. When I played against those guys, I saw they were good players, but also that the talent level was not that far away… That gave me the confidence to think I could compete at the NBA level.

What kind of advice did you receive from those players?

MB: They just tell to stay humble and work and keep my body very clean. Your body is your business. I’ve been talking to Louis Williams quite a bit during this process and he tells me to keep working. He went through it, he worked out for a lot of teams and knows it can be very tough on you.

Do you think you would be projected to go higher in the draft had you gone to a big college or do you believe being the star at a smaller college team worked for you?

MB: I think I had a real good year this year. If I would’ve had a year like this at another school like UConn, I would have had more exposure and would definitely be projected to go higher. Anyway, if I could do it all over again, I wouldn’t do it any different. I played at a small school in Providence and I made a huge impact in that community.

You did pretty well at the Chicago combine a couple of weeks ago. Was that a boost to your confidence?

MB: Definitely. I always had the confidence. The confidence was always there. Everybody that saw me play was impressed, but, like I said earlier, I didn’t have the exposure. Now the more exposure I get, the more people that see me, I’m getting more and more people impressed with my wingspan, my athleticism and the ability to make things happen.

Is there a specific team or system where you see yourself fitting in quickly?

MB: Any team that’s looking for scoring punch and needs help from a young guy that can come in and help in any way he can. I would play hard for any team – from the Lakers all the way down to the Wizards. It doesn’t matter to me. I will just go there and give my all.

Going back to Kobe, is there anything that you focus on the most about his game?

MB: Basically his footwork and how he always keeps his defenders off balance. I like that – the pump fake, the different moves he has. It’s just incredible how many moves he has.

Are you going to Newark for the draft or you’re not going unless you’re invited to the green room?

MB: I would love to be invited. I know my mother is a big fan and she wants to go. If I’m invited, I will know soon, but I don’t know yet.