Nikola Vucevic: "I try to learn watching Gasol and Nowitzki"

Nikola Vucevic: "I try to learn watching Gasol and Nowitzki" 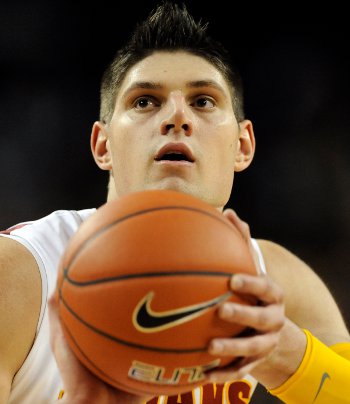 USC’s Nikola Vucevic is following in his father’s footsteps. The 6-foot-10, 260-pound junior forward from Montenegro has made a good impression during his first eight workouts. After being named the Pac-10’s Most Improved Player as a sophomore, Vucevic felt ready to become a professional when he finished his junior season. The potential lockout will determine if he starts this new chapter of his career in the NBA or overseas.

How are you doing so far? How many workouts do you have left before the draft?

During these workouts, what is the thing teams ask you to do the most? And what has been the most unusual thing you’ve done in a workout?

Can you tell us about your basketball memories when your father Borislav was a pro player in former Yugoslavia?

NV: I only had the chance to watch him on some tapes when he played for the Yugoslavian National Team. When I really watched him, he was a little older and playing in Belgium. I’ve got a lot of great memories, I watched almost every practice, every game back then. It was great for me, it was a great chance for me to learn a lot about basketball. It helped me a lot.

Did your father support you on your quest to become a pro player or maybe, with his experience, he wanted something else for you?

NV: He never told me anything about playing basketball. I just grew up in sports. I grew up watching my dad playing, I watched a lot of soccer too… I always liked sports and I wanted to do something about sports. At the end, among all the sports I tried, I liked basketball the most. My father never put any pressure on me like, “You have to do this or that.” But he told me  that once you choose something, you have to do it at 100 percent, whatever it is.’

In 1985, five years before you were born, your father battled some of the greatest players in European history during the European Championship: Arvydas Sabonis, Drazen Petrovic, Detlef Schrempf, Fernando Martin… What are the best Euros you have seen play in your life?

He played his whole career in Europe. What do you think about him not taking the step to play in the NBA?

From what we’ve read about your performances during the workouts, it pretty seems you’re going up in the draft board… What has your agent Rade Filipovich told you about your chances in this draft?

NV: When I talk to him, I don’t really like to ask him where I’m gonna be and all that… I just want to focus on doing my job in the workouts. As the draft approaches, we’ll talk more about that. He tells me to focus and basketball and he’ll take care of the rest.

You’ve had two meetings with the Sixers.

NV: My first meeting was at Chicago during the combine. It was one of the best workouts for me, and I did pretty well at the workout in Philadelphia. I really liked those workouts.

Some draft sites compare your game to different players like Darko Milicic, Mehmet Okur, Primoz Brezec… Which one do you think is more accurate?

NV: I haven’t read any of those things. I don’t really like to compare my game to anybody but when I watch players from the NBA and Europe, and I try to learn stuff from them. I like Pau Gasol. He’s the best post player out there. He can go right, left, he’s got a lot different moves. That’s a player I really like. And then there’s Dirk Nowitzki. He’s seven-feet tall, he can shoot so well, shooting off the dribble… It’s really impressive what he does.

Those are two great offensive players.

NV: Yeah, it would definitely help my career if I can become a three-point, long two-point shooter. It’s always good when the big guy can play inside and outside, especially because of how the game is played nowadays.

What made you decide to stay in the draft?

Did you take into consideration the lockout before making a decision? 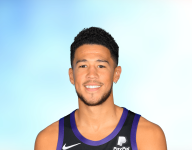