Justin Harper: "My ballhandling sets me apart from other power forwards"

Justin Harper: "My ballhandling sets me apart from other power forwards" 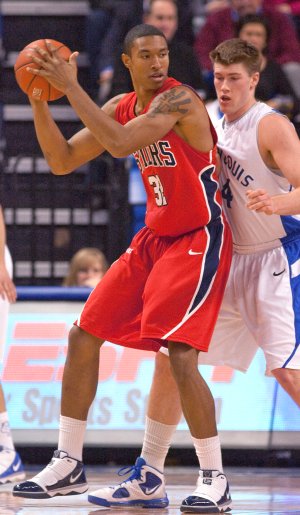 Justin Harper had a breakthrough season with the Richmond Spiders in his senior year, becoming one of the most efficient scorers in the NCAA. The 6-10 forward loves Kevin Durant‘s game and Dirk Nowitzki‘s poise, and he’s confident he will keep improving his game in the NBA playing both forward spots.

How many workouts have you done and which one was the best?

Justin Harper: The fifth and last one was with the Dallas Mavericks. I think that the workout I felt really good about was with the New Jersey Nets. The one with the Philadelphia 76ers was really good too.

What kind of feedback have you gotten from teams about your draft stock?

JH: Pretty good. They say they are impressed by the way I play against other players, that I really helped myself with the workouts. It looks like I could be a late-first round pick.

And what do you feel? Do you think the same?

JH: Yeah, I do. I think that I’ve proven myself to the teams I’ve worked out with and the questions that were raised about my game were answered.

What made you raise your game during your senior season?

JH: It was really confidence. My approach into my senior year was to put a lot of effort to get better, being more comfortable on the court. I realized it by myself, trusting in my abilities. That I can play against anybody. Last summer I trained in Boston for four weeks before my senior year with Bobby Martin. That really helped my defense abilities, my ballhandling, staying more aggressive and knowing when to attack.

You said you model your game after Kevin Durant. Are you still watching him to learn more about his game?

JH: Yeah he’s one of the players I watch a lot. He’s just so versatile, he can shoot from so many spots on the court… I try to work hard and that’s what I plan to do with my game.

You’ve shown that you’re a threat on the perimeter, but how would you rate your inside game?

JH: Well, out of 10 I would say my inside game is a 7 right now. I still got some things that I definitely have to work on, being more physical on the post. But I have confidence when I’m on the post, but it’s definitely an area where I can improve.

During this whole workout process, where have you been more comfortable, playing the three or the power forward spot?

JH: It doesn’t really matter to me. When I’ve done the workouts, I’ve competed the best as I could.

And in the NBA? Do you see yourself playing as a small forward or power forward?

JH: I see myself as a power forward who can stretch the floor with my range, although I think I’m able to play the three because of my ballhandling. I can put the ball on the floor, that’s a big part of my game and I think that’s what sets me apart from other power forwards in this draft.

You said one of the things you like the most about Michael Jordan was that he always remained calm on the court. What current NBA player plays with the most poise?

JH: I’d probably say it’s between Dirk Nowitzki and Kobe Bryant. They both have the same demeanor, the same approach during the entire game. Watching Dirk in the Finals, he would have one game where he would miss like 10 of his first 11 shots but he remained so poised and just kept shooting and he finally had a great game. The same can be said about Kobe.

When on the court, what kind of leadership you like to bring to the table?

JH: I’m more sort of a leader by example. I hold myself accountable as much as I hold my teammates accountable.