The Lakers are Bynum's team now

The Lakers are Bynum's team now 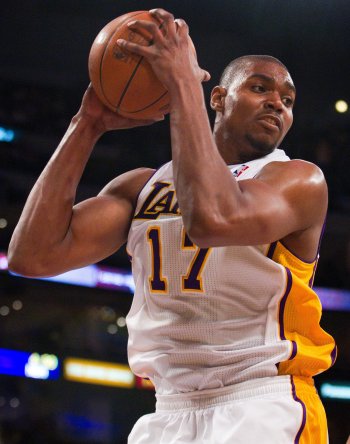 The NBA lockout will end someday, and when it does Los Angeles Lakers fans may well find themselves wishing it hadn’t.

Fans will discover they’re witnessing the new Lakers, the ones run by Jim Buss and built to cater in every facet to seven-footer Andrew Bynum, a nice enough 23-year-old kid with a dubious medical past and an even more suspect future.

Yes, aging star Kobe Bryant will still be a part of the equation, but he was put on notice over the summer when Jim Buss hired new coach Mike Brown without so much as a brief discussion with Bryant.

The message is clear: Brown is Bynum’s coach, and the team belongs to the young center as well.

“It’s obvious that that is what’s going on,” said one longtime Lakers insider. “Jim Buss is setting up Drew.”

That process began last season when assistant Chuck Person was given the freedom to restructure the Lakers’ defense around Bynum, never mind that the club was the reigning two-time NBA champion and seemed to have a defense that already worked quite well. After all, it was last seen stuffing the Boston Celtics in the second half of Game 7 of the 2010 NBA Finals.

The idea of the new defense, though, was to keep Bynum closer to the basket and to require less mobility from him (perhaps to help him avoid injury).

“Everything we do now revolves around him,” Person said last spring of the team’s defensive approach. “He’s the boss.”

The defense looked strong enough during stretches late in the regular season but was exposed badly during the playoffs.

As for offense, Bynum has long made noise that he wants to be more of a priority. Brown was hired after touting his experience as an assistant coach with San Antonio’s big guns team that featured Tim Duncan on offense. 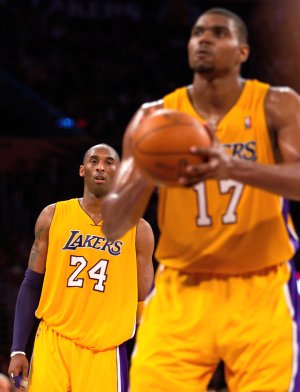 Bryant said little publicly after Brown’s hiring, but he did make it clear that he and Pau Gasol would remain the first two options in the Lakers offense.

Bynum “will have to fall in line,” Bryant has been quoted as saying.

Seems pretty clear that we’re witnessing more big pulls in an ongoing giant tug of war for the soul of the Lakers.

The struggle has been building for several years now. The only thing that kept it from coming to a showdown sooner was the success of coach Phil Jackson, whose presence in the Lakers organization kept the house in order.

With Jackson winning and with Jim Buss having messed up with his 2005 hire of coach Rudy Tomjanovich, there was no basis for replacing Jackson a second time.

But it was obvious that team owner Jerry Buss and son Jim begrudged Jackson his success every step of the way. Jerry Buss did not like paying him $12 million a season and forced Jackson to take a pay cut for his last season despite his having won two straight championships.

Jackson left town with a stinging parting remark that he had no relationship with Jim Buss.

According to Jerry Buss, son Jim now has a 90 percent say in the team’s basketball operations. That percentage may actually be higher now that Jim Buss has laid off the vast majority of the team’s scouting staff, including longtime assistant GM Ronnie Lester.

Perhaps Jim Buss would be smart to build the future around Bynum except that the young center has a troubled medical history that has never allowed him to play a full season.

It was a torn MCL that limited his play in the 2009 playoffs and a torn meniscus that did the trick in 2010. His right knee was drained repeatedly during the championship series, and Sports Illustrated reported this year that Bynum still keeps on his cellphone a picture of an 80-milliliter syringe filled with red fluid from his knee.

His size and injury history raise a strongly arched eyebrow with virtually every orthopedic doctor in the world.

Another huge unarticulated factor is that even after signing a four-year, $57.4 million contract in 2008, Bynum still lives with his watchful mother, Janet McCoy, in a house in Westchester in West Los Angeles. She has done a wonderful job raising him. By all accounts, he is an extremely bright, fully engaged young man.

But that doesn’t mean the circumstances don’t merit questions.

Tex Winter told me in 2008 that Bynum had a strange relationship apart from the rest of the team. The young center was protected by Jim Buss, who encouraged Bynum to get his own coaches because he opined that Jackson wasn’t a good coach for big men, Winter explained.

“It’s an odd situation,” Winter said at the time, noting that Bynum dealt with his medical issues mostly apart from the team’s medical staff.

It at least raises eyebrows about how much sway Bynum and his mother will have over Lakers decision making.

Jim Buss, who has no real basketball experience, has clung to Bynum as an example of his ability to recognize and draft talent with an insecurity that in some ways brings to mind former Bulls executive Jerry Krause except that Krause had spent decades working and scouting both basketball and baseball and had earned his stripes in the grind of the business.

Jim Buss hasn’t even had an office at the Lakers team offices, although that may change now.

According to one observer, it would be healthier for Bynum and the team if he were to take steps to become his own man as his 24th birthday nears in October.

On the other hand, maybe these are not such big issues. After all, the Lakers have long been prey to dramas of every variety. Maybe the players and coaches will handle this one as well as they’ve handled others in the past.

However, last year the team was consumed with behind-the-scenes issues in the playoffs. Bynum himself spoke out about the Lakers’ lack of trust. His comments were left open to interpretation by many.

One interpretation not articulated at the time was that he was in part asking teammates to trust in a defense created specifically for him.

If that was the case, his plea for trust failed miserably.

Unfortunately, the prospects don’t seem bright for trust to have a greater prognosis this time around either.

After all, Jim Buss coldly laid off many of the team’s loyal longtime employees, which had even Ronnie Lester, one of the Lakers most trusted staff shaking his head in bitter wonder.

That doesn’t exactly build a climate of trust for the team next season.

And with Jim Buss now obviously tilting the floor in Bynum’s favor, it could be quite a while before happy days return to Lakersville.