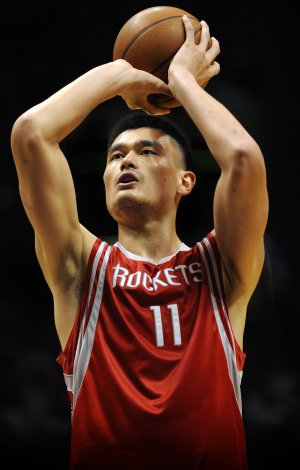 Yao Ming will be missed by basketball fans of all persuasions. However, despite all the gushing tributes that are swamping the airwaves, the truth is that he was a somewhat overrated player.

For sure, Yao’s huge physical dimensions and soft shots made him a twenty-point-plus scorer for three of his six relatively healthy seasons. He had an exceptional touch from mid-range where his shots were literally unblockable. And once he caught the ball while having one foot in the lane, Yao would either score or get fouled.

Otherwise, his moves were robotic and entirely predictable. Also, since Yao was extraordinarily slow off his feet and his shot releases in the low-post were even slower, quick-jumping defenders could frequently nip his turnaround jumpers or make him shoot under discomforting pressure.

Moreover, while he had good hands Yao was slow in moving his hands to catch any incoming passes that were slightly off the mark. He’d also wait for the pass to come to him instead of reaching out for the ball, thereby allowing quick-footed defenders to slip around him and make easy steals.

And, due to his being 7-foot-6, the ball was out of his hands for a relatively long time every time he dribbled. This enabled drop-and-dig defenders to limit him to one or two power-dribbles.

Yao was extremely ill at ease whenever he was fronted in the low-post, and was more wary than he should have been totally of any weak-side help behind him. But that’s true of many big men.

It was surprising, though, that until the very end of his playing days, Yao was reluctant to use his elbows to either fend off defenders or to maneuver himself into better position to snatch offensive rebounds. Instead, he tried to bully opponents with hip power and with sheer mass.

Nor was there any trickery involved in Yao’s offense – no drop-steps, switching hands, no hipper-dipper delights. Just straight-on turn-around jumpers, layups, and flat-footed jump hooks, with only an occasional duck-in and baseline spin from the right box. The big fellow was profoundly unathletic.

Yao’s heavy sneakers were a distinct liability on defense. He was helpless in defense of high screen/rolls, and any opponent who could turn, face, and go would leave him in the dust. Yao’s defense was also hindered because he had to lower his hands before he could lift them to attack a shot.

On the other hand, blocks and shot-menaces would occur if an enemy was careless enough to bring the ball into Yao’s sphere of influence.

Another downside of Yao’s game was his lack of endurance. Thirty minutes was about his limit per game. Plus, he was too nice a guy to get as mean-spirited and aggressive as he needed to be. 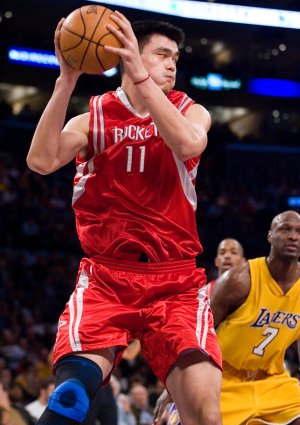 A few years back I made a prediction that was roundly condemned but which sadly has come to pass. In consulting a friend who happened to be both a hooper and a distinguished orthopedic surgeon, the resulting prognosis was that Yao was definitely suffering from a condition known as gigantism.

Because of the “overgrowth” of his bones and the subsequent insufficiency of an adequate blood supply, Dr. X firmly believed that Yao was vulnerable to various fractures – especially to his lower extremities. Which is precisely what happened.

So, how good was Yao?

Plenty good. Even unguardable in certain situations. But rather than being a franchise player, Yao was the world’s most colossal second-banana. Surrounded by the right players, however, he could have been an awesome piece on a championship-caliber team.

If Yao did have bonafide star-quality skills, his personality has much more lingering significance than his game. He was humble, intelligent, unselfish, honest, friendly and approachable – a rare combination of admirable qualities in a cutthroat business.

I hope that he maintains a viable presence in the basketball world, because Yao Ming’s lasting legacy is his dignity and his humanness.

So long, Yao. Thanks for the run.