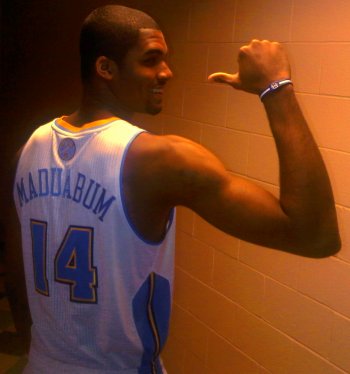 The last part of the 2011 NBA Draft provided some entertainment as the league’s deputy comissioner, Adam Silver, struggled to pronounce the names of several of the foreign players picked in the late 50’s. There was Tanguy Ngombo and Ater Majok. But most of all, there was Chukwudiebere Maduabum at No. 56.

Silver butchered his name. To Mabuadum, also known as Chu Chu, it was nothing new.

“They always kill my name,” the 20-year-old Nigerian forward told HoopsHype. “Nobody has gotten it right since I came to the United States.”

Excuse Silver if he couldn’t get that one right. In an era in which even obscure players are exhaustively scouted and become familiar to draftniks, there was little to no information available about Maduabum. Draft sites such as NBADraft.net or DraftExpress.com had no info on the player outside of basic things like height or weight.

The biggest stage for Maduabum before the draft had been the D-League – 20 minutes of it in total. The 6-foot-9 forward, whose rights were immediately traded to Masai Ujiri‘s Nuggets after being selected by the Lakers, averaged 0.7 ppg and 1.0 bpg in the NBADL in three games. His short stint with the Bakersfield Jam, a team he joined in March, allowed fellow Nigerian Ujiri, who first saw him at a basketball camp in Africa, to get another look at him.

“What they saw in me is that I can get better,” Maduabum said. “Hey, I was drafted, so I can make the NBA. In a year or two, I can be a great NBA player, a good NBA player.”

Realistically, that may take a little longer. But according to Will Voigt, his head coach in the D-League, Maduabum’s progress has already been significant in just a few weeks.

“Chu still has a long way to go before he can contribute on an NBA level, but his learing curve has been great so far,” Voigt said. “He has already made huge strides training with us in the offseason and I know that David Thorpe has also seen a lot of improvements with him.

“Chu still needs a lot of game experience. He hasn’t had the opportunites to play everyday that a lot of American kids take for granted. I have worked basketball camps in Nigeria for many years and it is not easy for players there to find the resources to play daily. A lot of his current weaknesses can be attributed to that. Nutrition, weight lifting and film study were all new to him when we first got him. With the work of our strength coach, Tim DiFranceso, Chu put on 20 pounds of muscle in his first two months here.”

At this point, there’s no telling where Maduabum, who had never been outside of Africa till this year, will be playing next season. The D-League or a team overseas are options right now, according to his agent Ugo Udezue. Whatever happens, it’s obvious Maduabum’s best chance of having a good basketball career comes thanks his shot-blocking skills.

“Chu has great timing as a shot blocker,” Voigt said. “This is something that can’t be taught and, combined with a 7-foot-3 wingspan and a great vertical leap, makes him a legitimate shot blocker at any level.”