Alex Owumi: The story of a player in the middle of the Libyan Civil War

Alex Owumi: The story of a player in the middle of the Libyan Civil War 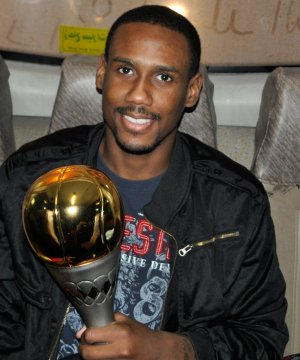 The life of a basketball journeyman is no cakewalk. Money can be good, but there's a lot of negatives to it – the constant instability, the uprooting from family and friends, the bad travels, the language barrier… Not to mention payments often come late or don't come at all. Alcorn State product Alex Owumi had already seen part of the dark side of playing pro ball overseas, but it was nothing compared to what he had to go through earlier this year in Libya. Playing for a club in Benghazi, the city that became the rebel stronghold against longtime Libyan dictator Muammar Gaddafi, Owumi got caught in the middle of fighting between the oppositon and the Gadaffi forces and became a first-hand witness of the brutality of the Civil War, which included shootings at civilians and the burning alive of pro-Gaddafi mercenaries.

Unlike most players, Owumi was no stranger to moving around from one country to another when his pro career began. The son of a Nigerian government official, Owumi went with his family as a kid from Lagos (Nigeria) to Britain and then the United States, where his father Joseph currently works at the Harvard School of Public Health managing a big budget for AIDS relief in Africa.

Following a nice senior year at small-college Alcorn State in Mississippi in 2008, the 6-foot-5 Owumi decided to start a pro basketball career that would take him to France, American minor leagues and, in 2010, to Macedonia. Owumi, a bulky guard, played at the former Yugoslavian republic till December of last year, when he got an offer to join Libyan club Al-Nasr Benghazi.

Protests against authoritarian regimes were spreading in Middle Eastern countries at the time of the signing, but the turmoil didn't involve Libya at first. That was soon to change.

Owumi first grew concerned about the situation in February, when small demonstrations started to get bigger and bigger. On February 17, real havoc began. As he was preparing to go to practice, Owumi received instructions from his club not to leave his apartment. Anti-government protesters were marching next to his building and military men were coming at them.

"I had access to the roof of my building and there were three or four tanks driving into a crowd of people," Owumi said. "I went back to my apartment for water and as soon as I went back up, I saw 30 or 40 military men shooting at the crowd of people. There was nobody with megaphones telling people to disperse. I just saw them shooting. Not to the air or the ground. Just shooting at people. Bodies were dropping. It was happening a block away from my street."

When he returned to the apartment, shocked, Owumi had no access to Internet and the cell phone wasn't working for international calls. He called the president of his team, Ahmed Elturki, asking for a way out.

"He told me, 'Don't leave the building, don't even leave the apartment'. I told him I wanted to go to the airport and leave and he told me the people in Libya had burned the airport down. I was in the middle of everything. I was like stuck in a box.

"I went two weeks without phone or Internet to talk to my family."

Fourteen days of confinement at the house followed heeding the advice of Al-Nasr's president when it became obvious it would be dangerous to leave the building.

With little food aside from tuna, bread and potato chips, which Owumi says he shared with neighbors, and no way to communicate with his family in the States, the days were long and stressful.

"The shootings were so bad at night that I had to sleep on the floor instead of the bed that was next to a window. You saw sparks all the time if you looked at the window. They were bullets."

In the last two weeks of February, the rebels took control of the city and pro-Gadaffi major Huda Ben Amer had to flee to Tripoli, the capital of the country, 400 miles to the west. Many civilians got access to weaponry of all kinds at that point.

"When I looked outside, I saw 10-year-old kids with machetes. They ambushed the police station, so the locals in my area went into the police station and got weapons. You saw regular people in the street driving around in jeeps, shooting AK-47s up in the air. That's when I realized this was no Egypt. It was war zone. It was like a movie. There was people driving tanks. It was people running loose.

"These people were not going to back down. I've never seen people willing to give their lives for their country like that. They were walking into bullets."

The bullets did not come just from Libyan military, according to Owumi, but also from foreign mercenaries hired from Chad, Sudan, Senegal, Nigeria and Eastern Europe. He was able to see the burned bodies of some of them in a visit to the hospital once he was able to get out of the house on March 1.

"There was a room with 30 or 40 body bags and they were still open. You could see the dead bodies. I asked who those people were and one person told me they were mercenaries from other countries. 'They shot them and burned these people alive', he told me. The hospital was crazy. There was people with no arms, babies crying… It was the saddest thing I had seen in my life."

When communications with the outside world were re-established and Owumi's family and girlfriend were able to contact him, they tried to get the American embassy involved to move him out of the country. It was to little avail at first.

Owumi made the decision to leave Benghazi with no American help. The president of Owumi's club got him a car and a Libyan driver to take him to Salum, a refugee camp in the Libyan-Egyptian border set up by the Egyptian government. He would follow a vehicle that had Sherif Azmy, Al-Nasr's head coach, as a passenger.

"I was terrified when he told me (about the plan)," Owumi's girlfriend Alexis Jones, a victim of Hurricane Katrina, said. "The news that we were getting in the U.S. at the time were that nobody was getting out alive. I wanted him to stay where he was and not leave till all passed."

Sharing nationality with some of the mercenaries doing part of the killing in Libyian territory meant additional danger for Owumi on his way to Salum. What would have typically been a six-hour drive ended up being a 10-hour trip, according to Owumi, who carried a knife taped to his body all along the ride, which took place on March 4. His car was stopped on several occasions and the issue of Owumi's Nigerian citizenship made the rebels antsy every time.

"I was a Nigerian joined by a Senegalese teammate (Moustapha Niang) trying to escape a country where Nigerian and Senegalese men were hired to kill Libyans. Fifteen minutes into the ride, we had our first checkpoint. Three or four locals with AK-47s knocking on the window. The driver didn't speak a lick of English. I get my passport out and all I can understand when they start speaking in Arab is 'Nigeria' and 'Senegal'. They ask me to get out of the car and I said no and took out my American passport. They said 'Good, good'. I was OK to go, but they said my Senegalese teammate could not. We showed them the playing cards from our team and said the name of our team. They took all his bags and dumped them on the side of the road. They weren't looking at anything. We were finally able to go, but the same thing happened at every checkpoint." 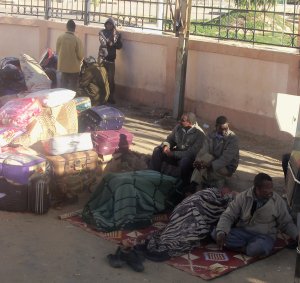 At the Salum refugee camp, thousands of people crowded together.

"We were sleeping on sidewalks of concrete. Eating crackers and drinking water."

Owumi, who waited two days for American embassy officials to pick him up from the refugee camp, credits his Christian faith for the fortitude to go through all this ordeal.

"I was physically drained when I got to Salum. I wanted to cry so bad. But you have to survive. You don't have time to be sitting there crying and feeling sorry for yourself. It's my relationship with God that got me through it. Me and my teammate were in Salum praying, praying and praying to get out of that situation."

The story took a surprising turn when Owumi, who had all along wanted to return to the U.S., took an offer from an Alexandria-based team when that was about to happen.

"I was on a bus going to Cairo, where I was supposed to get on a plane to the U.S., and my Egyptian coach (Sharif Azmy) called me to say there was a good offer." 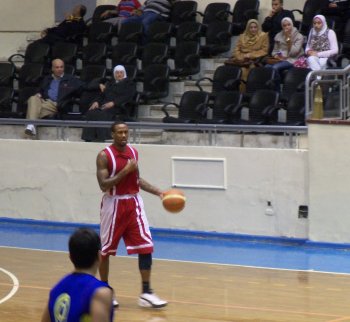 Clearly exhausted, with no decent meal and little sleep in the previous three weeks, Owumi decided to join the club to "finish out (the season) strong".

His mother and girlfriend were initially upset about Owumi's decision to stay in the area for another three months, but the story ended on a good note as Owumi led El-Olympi Alexandria to Egypt's first division.

From afar, the Atlanta-based Owumi is following the events of Libya's still-running Civil War closely.

"I log on to CNN.com every day to see what's going on. A beautiful country is being destroyed. Nice people are being killed. These people had their backs against the wall so they had no other choice but to fight. This has gone for a long time, a very long time. Some time it has to stop."