Pacers guard George Hill is in wait-and-see mode regarding the possibility of playing overseas during the lockout, agent Michael Whitaker told HoopsHype.

“If a team with the appropriate budget – that’s an Euroleague or Eurocup team – is willing to give him an NBA out if and when the lockout ends, George will highly consider the offer,” Whitaker said. “If the NBA season is fully canceled, it will be more likely that George pursues an opportunity to play in Europe or China.

“We had a few Euroleague and Eurocup teams very interested and willing to grant him an NBA out, but at the time George was not ready to commit to such offers. If such an offer comes at this point, I believe George will be more willing to consider it and accept it.”

Hill averaged 11.6 ppg and 2.5 ppg last season with the Spurs, where he split point guard duties with French All-Star Tony Parker. He was traded to the Indiana Pacers on draft night. 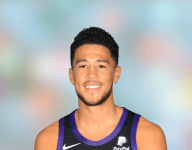