More on the NBA/NBPA BRI split

More on the NBA/NBPA BRI split 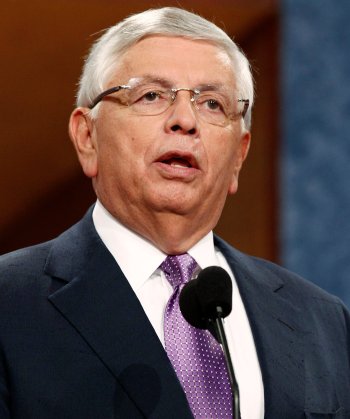 The NBA and NBPA have expressed grave doubts about each other’s willingness to negotiate a new collective bargaining agreement (CBA) in good faith, as reported by CBSSports.com’s Ken Berger and others.

The NBA, through David Stern, has articulated doubts about players’ willingness to productively engage, and the NBPA has filed a formal charge against the NBA with the National Labor Relations Board, alleging that the NBA has not bargained in good faith. Not to be outdone, the NBA has filed a formal charge against the NBPA for threatening to decertify its union. This finger pointing will not be productive and will only serve to further imperil the 2011-12 NBA season.

The NBA’s most recent bargaining position is no doubt “owner friendly” and is no doubt far from the deal that will eventually be reached, as it calls for player salaries to be fixed (reportedly at a max of $2 billion) over a 10-year span. While players would give up little in the short term, an upturn in the economy and a consistent growth of the NBA would result in a very favorable deal for the owners in the longer term.

But is this “offer” really a failure to bargain in good faith? Did the NBA provide false or misleading facts to the NBPA in presenting its proposal? Didn’t the NBA turn over its audited financials to the NBPA without having to be compelled to do so? If the NBA did actually lose money in every year of the last CBA, is profit-seeking behavior on the part of owners an unreasonable request? Doesn’t the NBA have a duty to craft an owner-friendly NBA proposal, especially after the last CBA and especially in the still early stages of negotiations? Shouldn’t parties be able to send messages through their proposals that indicate their positions? Has the NBPA repeatedly made concessions to its proposal while the NBA refuses to refine its proposal?

We are still early in negotiations, and the parties are still posturing. The offering of a proposal to which the other side would not agree does not constitute bad faith. A shift of hundreds of millions of dollars annually is on the line (and likely billions over the course of the CBA). While the parties have not failed to bargain in good faith, the creativity, productivity, and urgency of negotiations leaves much to be desired.

While the NBA and NBPA have made proposals that the other considers to be non-starters, I will continue to advocate sensible compromise positions. In one of my earlier blogs, I suggested a formula that would award players decreasing percentages of BRI as the BRI figure increased. This would allow players to have the comfort of higher percentages of BRI in the event that the NBA’s revenues stagnate and would award owners with higher BRI percentages if they were able to grow the league to new and unprecedented revenue levels.

The problem with this proposal is (1) that players are arguably equally responsible for fueling new revenue growth, and (2) it does not frame the discussion in terms of profit (or operating income), which is a much more critical benchmark than gross revenues.

Revenues are deceiving because even a record-setting BRI for the NBA can result in massive systemic problems if, as in the present situation, owners are unable to collectively turn a fair profit. For every additional dollar of BRI, players now get 57 cents. While 43 cents goes to owners, the owners are exclusively responsible for paying non-player staff, paying for the arena, advertising, insurance, and a host of other operating expenses. After paying all of these expenses, many owners have found that there is less than nothing left for them, as they are forced to write 7- or 8-figure checks to cover their franchise’s losses.

A potentially more fair way to divide basketball-related income would be to replicate other industries, where the employee receives a guaranteed paycheck but then can also receive raises (or face paycuts) depending upon the success of the business for which he works. In an NBA where the players increasingly see themselves as business moguls and walking brands, they should understand that a system that rewards owners with no profits is a broken system.

Would players accept losing money from failed investments? Would a player who founded his own record label accept repeatedly writing checks to make up for the business’ profitless performance as all of his recording artists were becoming rich and famous?

So rather than assigning the players a fixed percentage of BRI annually (whether 45 percent, 57 percent, or anywhere in between), regardless of how profitable the business is, the players could receive two forms of payment: (a) a guaranteed, fixed percentage of BRI, and (b) a raise or paycut depending on the NBA’s profitability. So, if the NBA’s owners collectively profit, then players will receive additional money beyond their initial BRI allocation. If the owners take a loss, then the players would receive less than their share of BRI.

For such a system to work, annual increases or decreases in the NBA’s teams’ equity values would need to be accounted for (which may be difficult to accurately measure), and strict transparency of teams’ books (audited by a neutral third party) would be required to ensure that the NBA was being perfectly frank about its profits and losses.

On the other hand, if owners collectively made $183 million in profits (per Forbes) in 2009-10, a BRI split of 50/50 would result in owners earning $255 million more because of the BRI adjustment. With total profits of $438 million, players would share 50 percent of the profits, or $219 million.

Adding the $1.8215 billion to the $219 million representing players’ 50 percent share of profits would bring player salaries to $2.04 billion, or 56 percent BRI. Players would earn $2.04 billion and owners would earn $219 million. If BRI were to increase to $4.5 billion, and if owners managed $700 million in profits, players would earn $2.25 billion from the BRI and an additional $350 million from their share of profits, resulting in $2.6 billion in player salaries (58 percent BRI) and a profit of $350 million for owners. All of the above hypotheticals assume that the NBA’s franchise values held constant.

One criticism of this system is that players could be punished by bad business decisions of the league and its owners. On the flipside, owners could be frustrated by having to equally share profits that result from their own shrewd operation of their businesses. Moreover, a concern would be ensuring transparency of financial records, as profits, losses, and franchise valuations are easily manipulated by accountants. If these issues could be resolved, this proposal could have legs.

While it would not conclusively ensure profitability for owners, it would minimize owner losses by requiring that players share in them. While player salaries could drop below 50 percent of BRI under this plan, they could also approach or exceed 60 percent in the event of explosive BRI and profit growth.